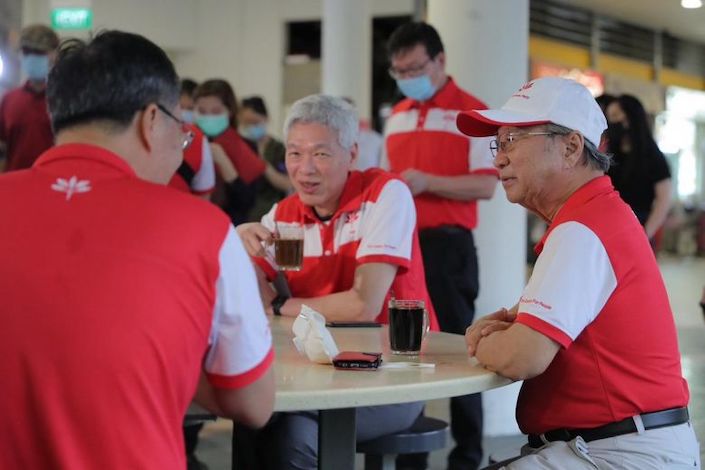 Tan said that Lee has been a member "for quite some time,” but due to the Covid-19 situation, they were unable to have a proper membership card presentation ceremony.

“This morning, I have a great pleasure in giving this Progress Singapore Party membership card to Lee Hsien Yang, who joined us quite some time ago,” Tan said.

Lee turned up at 8:30 a.m. at the market with Tan and a group of PSP members, all of them wearing the party's red-and-white polo T-shirt.

The Straits Times had reported earlier on Wednesday that Lee had joined the party, but  party sources said he was unlikely to be fielded as a candidate at the election. Lee reportedly joined the party two months ago, just before the circuit breaker.

Asked if he would be standing for elections, Lee replied: “When I'm ready to disclose that, you will find out.”

“I joined the party because I think that Dr. Tan is committed to doing the right thing for Singapore and Singaporeans and he loves the country. And he has brought together a group of people who share his vision, and it is a vision which I believe will build a better Singapore,” Lee said.

He said that issues such as income inequality, housing and governance and transparency, need to be dealt with, and noted that “the PSP has an approach that emphasizes compassion.”

Tan was similarly coy about whether Lee would contest the polls: “I’m not confirming … Don’t worry. In politics, we know when to make our move. Timing is important.”

He noted that there were many ways Lee could contribute to the party. “He is not just an ordinary person. His father is the founder of Singapore, you know, so that’s very important. And the fact he has decided to join us is a clear indication that the current (government) didn’t follow what his dad wanted.”

Later in the evening, Lee appeared in a brief online broadcast, appealing to Singaporeans to volunteer with the PSP and to donate generously.

“The PAP has lost its way. My sister Wei Ling shares this view too. In fact, she said so in a Facebook post in August 2016 before Oxleygate. … It’s possible to be loyal Singaporeans, to be proud of what has been accomplished in the past, to recite with pride ‘we the citizens of Singapore,’ to love Singapore and yet to not vote PAP,” Lee said.

Lee has been embroiled in a long-running feud with the prime minister over the fate of their father’s house on Oxley Road.

Lee’s emergence comes a day after Parliament was dissolved and the Writ of Election was issued. Nomination Day will be on Tuesday, with Polling Day on July 10.

Tan said Wednesday that he thought the timing of the election was “irresponsible” and potentially puts a lot of the elderly into a dangerous situation. “The signs are there, it is so clear,” he said. “And if they don’t want to heed the signs then the price they have to pay, as I said before, they might win this battle but they are going to lose the war.”

Tan has said on multiple occasions that he and Lee Hsien Yang are good friends and that if Lee wants to join PSP, it would have to be on the terms of the party.

The duo have been spotted before on several occasions having breakfast together, once at a hawker center in the Prime Minister’s ward.

In July, Lee Hsien Yang said on Facebook: “I wholeheartedly support the principles and values of the Progress Singapore Party.”