In Depth: How Beijing’s Second Covid-19 Wave Knocked Its Business Recovery Off Course 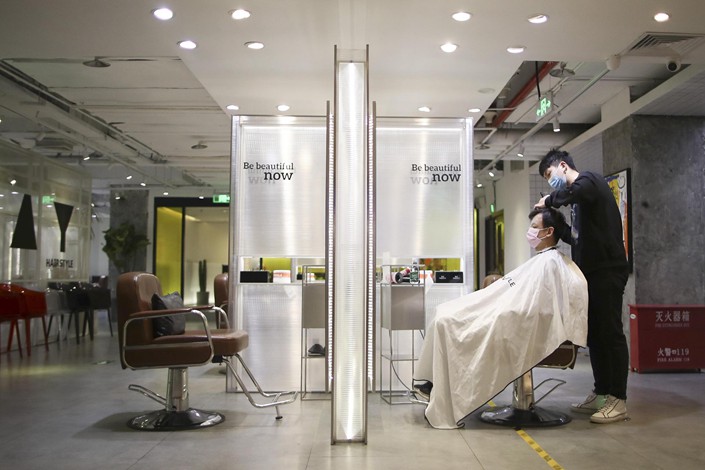 A masked hairdresser gives a masked customer a haircut in Beijing on Feb. 24.

Things were just starting to look up for Ankit Nayal. On June 5, several months after the coronavirus outbreak forced shutdowns and restrictions that decimated his company’s finances, the Beijing-based gym director finally got the go-ahead to fully reopen.

“The second wave might set us back again,” he told Caixin in an interview.

Beijing’s thousands of small and midsized companies face renewed uncertainty as the 21 million-strong capital works to douse its new coronavirus hotspot. Private business owners from across the city’s ailing service sector said the return of disease controls has prolonged slumps in revenue, wilted recoveries and deepened fears of bankruptcies.

How they cope with the reimposition of measures may hold lessons for the recuperation of the private sector following China’s unprecedented 6.8% economic contraction in the first quarter, which also saw 460,000 firms shut down. Private enterprises provide 60% of the nation’s gross domestic product, 50% of its tax revenue and 80% of urban employment, according to government statistics.

Nayal said his company, B Active 24 Hour Fitness, had virtually no income during the initial virus lockdown. An uncoiling of regulations in May spurred new subscriptions and helped the company break even that month.

But the announcement of more than 300 new Covid-19 cases in Beijing from June 11, most of which are linked to a wholesale market in the city’s southwest, prompted municipal government officials to ratchet up restrictions that still haven’t eased, despite daily infection tallies declining to single figures.

Within days, B Active saw sales plunge back to between 10% and 40% of its breakeven figure.

Despite recognizing the need to protect public health, Nayal said the measures effectively derailed the company’s attempts to revive demand in the aftermath of the first outbreak.

“(Our clients) were just restoring their confidence, and now they’re scared to go out again,” he said.

Officials reinstituted similar rules across the catering sector, requiring restaurants to restrict group bookings and refuse entry to diners who hadn’t shown an online health code, completed a body temperature check, and logged their personal details at the door.

For Muhammet Annayev, the owner of two upmarket eateries serving Turkish and Caucasian cuisine, the measures scuttled a fragile recovery predicated on cut-price meals. It’s not a rare strategy: Several Beijing business owners said they have relied on discounts, promotions and special offers to lure back customers since the first outbreak dissipated.

While Annayev’s efforts brought diners through the door, the Turkmenistan-born restaurateur estimated the markdowns reduced his profit on each dish by 70% even before the number of Covid cases began to rise again.

The uptick in infections was “extremely worrying” for the city’s restaurants, he said. “Huge numbers will not survive.”

Despite the array of government measures in place to cushion the impact of Covid-19 on private firms, some business owners said genuine help was hard to come by.

Delivering the national government’s 2020 work report in May, Premier Li Keqiang announced a host of measures designed to save the country’s businesses an additional 2.5 trillion yuan ($354 billion) over this year and bolster employment and basic livelihoods.

Successive tax and fee reductions since January could save businesses more than 310 billion yuan over the course of the year, the State Council, China’s cabinet, said in June. The central government has also ordered banks to prop up struggling firms with lower interest rates, preferential loan policies, deferred repayments and reduced bank charges.

Province-level governments have also joined in. Beijing, for instance, provided (link in Chinese) a three-month tax break to small and midsize enterprises, something both Nayal and Annayev said their companies were looking into. The city also announced rent cuts, business subsidies and reductions to social insurance fees.

But so far this year, the support measures have yielded mixed results, said Kyle Freeman, a partner at the Asia-focused consultancy firm Dezan Shira & Associates.

While many cash-strapped companies have taken advantage of lower social insurance contributions and training subsidies, they have found it more difficult to obtain emergency financing and loans, he said.

“Banks are probably still lending less to (these firms) than the government would like to see,” he added. “The government has continued to make adjustments to policy in an attempt to further stimulate loans … but this only seems to have had a marginal effect.”

Annayev, the restaurateur, likened the support he has received to “a drop in the sea.”

For his two restaurants, which both come with a monthly lease of about 100,000 yuan, he respectively managed to secure a one-month rent freeze and a three-month, 10% rent discount. He also took out an emergency loan, but declined to identify the bank or the sum he obtained.

So far, it hasn’t been enough. “Our losses are much more than the help we can find,” he said.

Business owners warned of a delayed wave of bankruptcies by companies that survived the initial impact of the pandemic but aren’t built to deal with successive waves of disruption.

They include the thousands of education and training firms that rely on prepaid tuition fees, said Sophia Su, founder and CEO of Genius Lab, a provider of extracurricular teaching for pre-college students.

In the name of disease control, education officials in Beijing have forbidden companies from holding classes in person until local schools fully reopen — something she now predicts won’t happen until September. The move has hobbled sales and led some parents to demand refunds.

The triple whammy of persistently low revenues, high fixed costs and refund-hungry clients is gradually eroding the liquidity of many businesses and setting the stage for a slew of bankruptcies once the outbreaks have run their course, according to Su.

“We won’t know the true impact until then. At the moment, a lot of things remain uncertain,” she said.

China seems prepared to strengthen support for businesses in the event of a far-reaching virus resurgence, said Bakhta of Daxue Consulting. “Overall, China’s strategy seems … to focus on implementing relief measures and lessening their spending to give them more room for maneuver in case of a second wave.”

Dezan Shira’s Freeman described China’s Covid-19 business support programs as “fairly conservative” compared to other countries. “The government still has a number of policy levers it can utilize to further support businesses and stimulate the economy.”

Yet multiple service professionals told Caixin they feared for the future of their businesses if another coronavirus wave hits later this year, as some experts have predicted.

“If it stays like this, we’ll need to take out second and third loans later in the year,” Annayev said. “Eventually, we won’t be able to pay them back.”