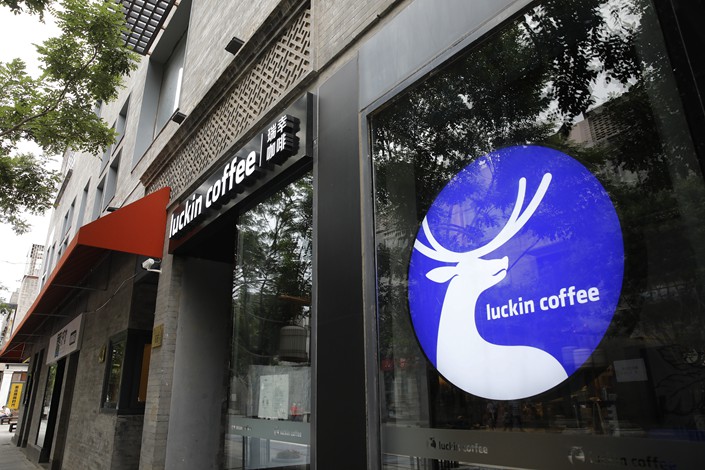 Luckin was once a rising star in China as it attempted to challenge Starbucks.

The founder of scandal-plagued coffee chain Luckin Coffee Inc. survived a vote by the company’s board to remove him as director and chairman on Thursday, even as he is still expected to leave both positions following a separate vote at a shareholder meeting set for this weekend.

The latest developments centered on Lu Zhengyao are the result of a power struggle within the embattled company, which has admitted to reporting around $300 million in fake sales last year. A special board committee that had been investigating the fraud called the Thursday meeting to vote on Lu’s ouster. Sources previously told Caixin that Lu, also known as Charles Lu, had been uncooperative with the committee, refusing to hand over his phone or computer for their examination.

In the end, only four of the board’s eight members voted in favor of Lu’s removal at the Thursday meeting — one shy of the five votes needed to oust him under the company’s rules, a source close to the company told Caixin. Three of the remaining votes didn’t support Lu’s removal, though it wasn’t immediately clear if they voted against him or simply abstained.

“A meeting of the board of directors of the company was held on July 2, 2020 to consider the previously disclosed proposal … to remove Mr. Charles Zhengyao Lu, as a director and the chairman of the board,” Luckin said in a brief filing to the U.S. securities regulator. “The resolution of the proposed removal was not approved by the affirmative vote of no less than two-thirds of the other directors present and voting at the board meeting, pursuant to Article 101 of the Articles of Association of the company. As a result, Mr. Charles Zhengyao Lu will remain a director and the chairman of the board.”

The special committee that called the meeting had been investigating the fraud, and earlier this week released a report saying Luckin’s 2019 sales were inflated by 2.12 billion yuan ($300 million) and expenses by 1.34 billion yuan. Those figures were largely in line with what the company said in early April when it first disclosed its suspicion of the fraud.

While the special committee had called the board meeting seeking Lu’s ouster, Lu himself has called a separate meeting of all shareholders for Sunday where he also is proposing his own removal. But unlike the board meeting, which was just aimed at removing Lu, the shareholder meeting set for Sunday would also see the removal of three other non-executive directors who were part of the anti-Lu faction and voted to remove him at the Thursday meeting, sources told Caixin.

Luckin’s board has been in a state of turmoil ever since the company admitted to the fake sales in April. Two of its independent directors have resigned since then, and the company also forced its CEO and COO to resign from the board after determining they were involved in or had knowledge of the fraud. Throughout, however, Lu had stayed on as the board’s chairman.

Luckin was once a rising star in China as it attempted to challenge Starbucks with a business model of app-only ordering for coffee served in compact, minimalist shops. It opened stores at a breakneck pace, and scored a major milestone when its store count surpassed Starbucks in China by the end of last year.

To help fuel its rapid rise, the company raised more than $500 million in a Nasdaq IPO in May last year, and raised another sum of about $800 million this January through a combined sale of shares and a convertible bond. But after reaching a market value of as much as $13 billion, the company’s stock lost most of its value following the fraud disclosure. The stock is now in the process of being delisted by the Nasdaq, a move that Luckin had initially opposed but later decided not to fight.