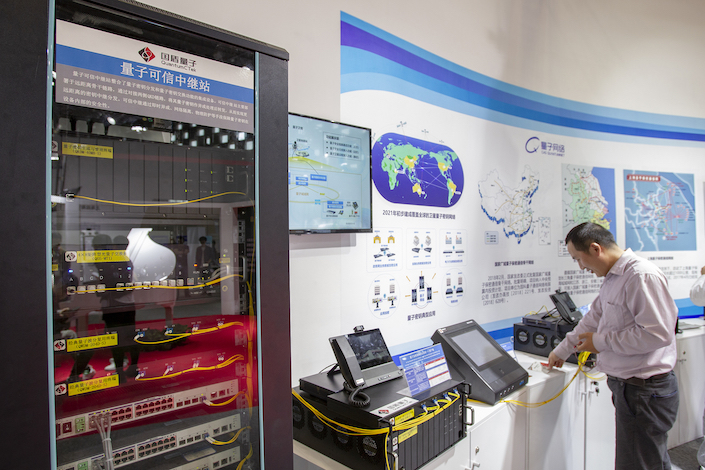 A Chinese tech company soared more than 10-fold Thursday on its trading debut amid a stock market buying frenzy that has led to surges in trading volumes and margin debt while overwhelming trading platforms.

QuantumCTek Co., which develops quantum technology-based information products, finished its first trading day on China’s tech-heavy STAR Market at 370.45 yuan ($52.8) a share, up 924% from the 36.18 yuan initial public offering price and giving the company a market capitalization of 29.6 billion yuan. The stock shot up more than 1,000% during the day.

QuantumCTek is among a number of new listings benefiting from China’s recent market boom. On Tuesday, medical equipment manufacturer Tinavi Medical Technologies Co. rose 614% in first-day trading, followed by a 438% jump for Geovis Technology Co., a mapping service provider, on its Wednesday debut.

China’s $9.3 trillion stock market has sustained a powerful rally and entered a bull market amid rising investor optimism fueled by a relaxed monetary policy and an economy recovering from the fallout of Covid-19. The CSI 300 Index, which tracks the top 300 stocks traded in Shanghai and Shenzhen, climbed nearly 7% last week to a five-year high.

QuantumCTek broke the market's record for a first-day gain. The STAR Market, launched last year as a testing ground for China’s stock market restructuring, eliminated limits on price moves for a stock’s first five days of trading. The rest of China’s markets cap the first day rise of a newly listed stock at 44% and on following days at 10%.

Hefei-based QuantumCTek is the first quantum technology company to go public in China. The company specializes in quantum communications equipment and solutions for use in telecommunications infrastructure and cloud computing to customers in the government, financial and energy sectors, according to its website.

Established in 2009 by scientists from the Chinese Academy of Sciences and the University of Science and Technology of China, the company claimed holdings of 212 quantum communications-related patents in China and abroad.

Following QuantumCTek’s surge, China Securities Finance Corp., which funds securities businesses’ margin lending, said it would temporarily halt its services of allowing institutions to loan QuantumCTek’s shares to each other for trading because of the high portion of margin buying in the stock. Analysts said the move could affect investors’ access to borrow the stock for short selling.

The market has added more than $1 trillion of value since June 30, while investors’ margin financing is rising at the fastest pace since 2015, according to Bloomberg. In margin trading, investors borrow funds to buy shares. The margin is the difference between the amount of a loan and the value of the shares put up as collateral. Such trading adds to market risks because declining share values may force sales to cover margin loans, adding to downward pressures.

As of Monday, outstanding margin debt on domestic exchanges amounted to more than 1.2 trillion yuan, up 36.7 billion yuan from July 3, the biggest increase since January 2015, Bloomberg data showed.

The top securities regulator warned investors of risks in the margin trading boom. The watchdog Wednesday published a list of 258 financial outfits that provide illegal lending to alert investors looking for margin lending.