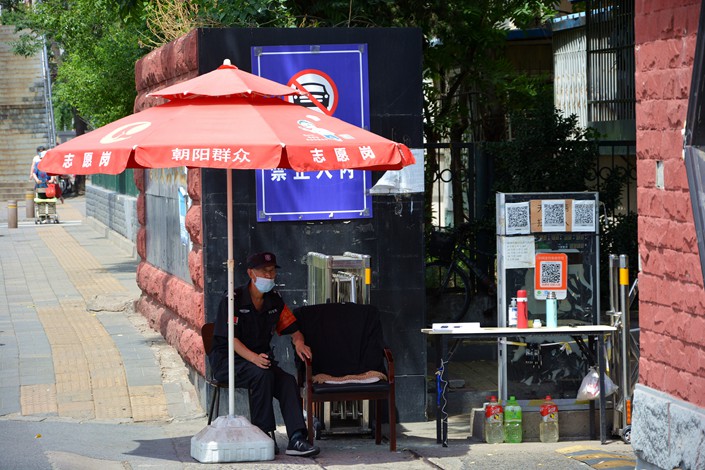 China is moving to change its Emergency Response Law after experts questioned the legality of blanket lockdowns imposed earlier this year to control the spread of the coronavirus.

The National People’s Congress announced a plan to amend the law in its annual legislative work plan last month, fueling speculation that a formal draft may be released to the public by end of year.

The revision would be the first change since the law was enacted in 2007, five years after a deadly outbreak of severe acute respiratory syndrome (SARS) convinced policymakers to draw up rules for dealing with public emergencies.

The plan comes as China recovers from a Covid-19 epidemic that killed more than 4,600 people in the country this year and prompted rigidly enforced business shutdowns and severe restrictions on movement.

In some areas, officials threatened residents with detentions and fines if they refused to comply.

While the measures were credited with staunching the virus’s spread, experts said at the time that some local governments had exceeded their legal powers when it came to restricting freedom of movement.

The proposed amendment seeks to iron out those problems.

At the “Two Sessions” political meetings in Beijing in May, several delegates argued the law does not guarantee the free flow of information during crises, protect citizens’ lives and property, uphold the public’s right to know, or rein in administrative powers.

He proposed amending the law to further empower local-level governments to report infectious diseases and other rapidly developing emergencies, and adding a legal proviso that would exempt specialist workers from punishment if they publicly commented on developing emergency situations “in good faith.”

“Enforcement agencies must fully consider whether those who publish or broadcast information that turns out to be false are doing so out of malice,” Zhou said. “As long as the information is basically factual and they bear no ill will … we should give them a certain amount of leniency. Otherwise, the public may not speak up.”

Other officials argued that tinkering with existing legislation would not get to the heart of the problems.

Zhang Zhuohua, an NPC delegate and vice chairman of the Standing Committee of Central China’s Hunan province, said the government should speed through an all-new “Emergency Status Response Law.”

He added the current law had “congenital defects,” including a lack of detail on citizens’ rights during times of crisis, few checks on officials responding to emergencies, and no system for confirming emergency incidents.

His comments are hardly a fringe view. Previously, Zhang Xingkai — a national Standing Committee member and head of the China Academy of Safety Science and Technology, who is not related to Zhang Zhuohua — proposed drafting a separate “Emergency Management Law” that would clearly define crisis response systems.

One law or more?

Yu An, a professor at Tsinghua University’s School of Public Policy & Management, said the problems with the Emergency Response Law could only be resolved by creating a new “State of Emergency Law.”

The legislation was necessary because “exercising the government’s emergency response powers and protecting citizens’ rights during emergencies both demand a basis in high-level law,” he said.

A State of Emergency Law is the only way to ensure China’s crisis management powers do not violate public or private rights enshrined in the country’s constitution, Yu added.

Many countries, including the United States, have separate legislation for declaring emergencies and responding to them.

Lin Hongchao, director of the emergency management law and policy research base at China University of Political Science and Law in Beijing, said China’s coronavirus recovery period was a good time to discuss a law that would categorize different states of emergency and lower the threshold for announcing one.

He said an amended Emergency Response Law could exist alongside a new State of Emergency Law, with the former dealing with “normal” emergency situations and the latter with “abnormal” ones, giving governors the constitutional flexibility to toggle between the two as crises arose.

Responding in May to a similar proposal put forward by a group of scholars during the initial coronavirus outbreak, a spokesman for an NPC-linked legal commission said although the current Emergency Response Law differed in some ways from the proposed State of Emergency Law, it contained many of the same functions and effects.

China had already drawn up a series of legislation related to the Emergency Response Law and possessed relatively comprehensive legal systems for enforcing them, the spokesman said, adding that the “relevant agencies” under the NPC Standing Committee would further investigate whether a special State of Emergency Law was necessary.

Compared with other legislation, the revamped emergency response law is taking a faster, more collegial path toward reality.

Typically, China’s laws are drafted by government departments, submitted by the State Council — the country’s cabinet — and ratified by the NPC Standing Committee, a largely rubber-stamp parliament.

But this time, legislative bodies have been involved from the outset, co-drafting the text alongside officials in an effort to refine it and smooth its route toward enactment.

“The emergency response and justice ministries, as well as an NPC special commission, are moving forward together on this and will pass it on directly for ratification once the amendment procedures are completed,” a legal expert with knowledge of the matter told Caixin.

Another expert said a preliminary draft drawn up by the Ministry of Emergency Management faced a complex approval process because much of its content touched on relationships between central and local governments and different ministries and committees. At least 20 departments needed to give feedback on the document before it could be submitted, they added.

Although details of the draft are scant, there are indications of potentially far-reaching changes.

In early June, an internal government document entitled “Emergency Management Law” was circulated widely online. The text — a version submitted for internal government feedback in May that legal sources subsequently authenticated for Caixin — suggested officials were at least mulling a name change to the Emergency Response Law.

A member of a specialist group on the amendment — who, like the aforementioned two experts, requested anonymity because they are not authorized to speak to the media — said the name change was yet to be confirmed and the document in question was not a final version.

The amendment would center on implementing small but necessary reforms to China’s emergency response system that were revealed during the coronavirus outbreak, they said, adding that particular attention would be paid to emergency status systems, information sharing and early warning systems.