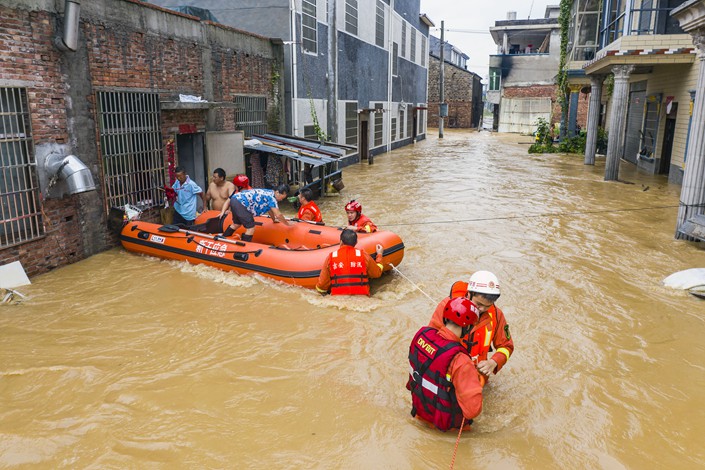 The Ministry of Emergency Management increased the flood response level from three to two, the second-highest in a four-tier system, state media reported.

Authorities in East China’s Jiangxi invoked a level-one emergency response on Saturday amid fears of flooding in the basin of Poyang Lake, the country’s largest body of fresh water.

Lakeside monitoring stations saw water levels over the weekend exceed those of 1998, when thousands of people perished in one of the deadliest natural disasters in China’s modern history.

Warning that the current situation is “grim,” Chinese President Xi Jinping said Sunday the country had entered a “crucial period” of flood control and Communist Party officials should guide relief work at the frontlines of the crisis, according to state news agency Xinhua.

The East Asian nation is in the throes of one of its most devastating flood seasons in decades, which experts have linked to climate change. As of midday Sunday, 141 people had died or gone missing in deluges since the beginning of June, according to the emergency management ministry.

A total of 38 million people have been affected by the disasters, with 2.25 million taking part in emergency evacuations, the ministry said. Floodwaters have so far swept away 28,000 homes, ruined 3.5 million hectares of crops and caused 82 billion yuan ($11.7 billion) in damages.

While the rain eased in some regions over the weekend, many rivers and lakes continued to record extremely high water levels.

Three times as much rainfall has fallen across northern Jiangxi so far this month compared to the July average, swelling waterways to their highest point in years and causing some local dams to overflow.

In an interview with state broadcaster CCTV on Sunday, Water Resources Ministry spokesperson Wang Wei said water levels were forecast to keep rising at the lake as well as along mid- and downstream sections of the Yangtze River, whose banks are home to about 200 million people.

A slew of riverside communities along Asia’s longest river have been on high alert for flooding since the beginning of June.

In some areas, like the central city of Wuhan, engorged waterways are a new threat to lives and livelihoods still recovering from this year’s deadly coronavirus outbreak.

Other regions, from Yunnan in the far southwest to Zhejiang in the east, have also battled inundations.

China’s flood season usually falls in June and July, when the so-called “plum rains” blow in from the Pacific Ocean and soak the country’s south.