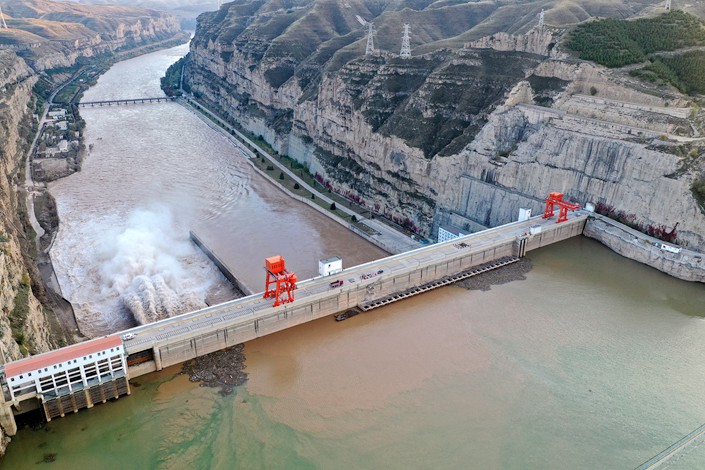 The coronavirus threat has still not receded, but China is already grappling with a new disaster. Since early summer, persistent rain across the south has triggered floods that have killed dozens and destroyed huge amounts of property.

On Wednesday, Premier Li Keqiang said at a State Council meeting that the country was administering flood relief in affected areas and pushing for the construction of major water resources infrastructure. The meeting’s participants reviewed the 150 such projects slated for this year and beyond, and agreed to accelerate their construction through market mechanisms, by deepening reform of financing systems, and expanding stock ownership and debt financing.

We believe these commitments take into account near-, mid- and long-term targets while covering both infrastructure building and systemic reform and look forward to seeing them put into action.

China has moved relatively quickly to address its flooding problem. In March, an agency affiliated with the State Council, China’s cabinet, issued a warning that flood prevention should be prioritized alongside disease control and economic recovery. The government’s water resources department then drew up a preliminary plan.

After the floods hit, all levels of government pivoted from the difficulties caused by the Covid-19 crisis to mitigating the losses of the new disaster. Yet some localities were too hesitant and couldn’t ease the deluges or evacuate citizens in a timely manner, with tragic consequences. From now on, we must improve the capacity of local governments to respond to emergencies. It’s similarly important to increase investment through many different channels, make up historic shortfalls, and push our water infrastructure to new heights.

It should be pointed out that many people have advocated for so-called “new infrastructure” since China started getting back to work after the epidemic. Their calls seemingly assume the country’s current infrastructure is somehow saturated and there is little room for “old investments.”

In fact, China’s yearly inundations demonstrate serious shortcomings in how the country invests in public goods like flood infrastructure and urban drainage systems. The current deluges are a warning that we urgently need to rectify our cognitive bias. We must fully recognize not only that water resources management is not only the lifeblood of agriculture, but also that investing in it and the growth of GDP can promote each other.

Recent years in particular have seen the central government push for significant water infrastructure improvements on several occasions. Yet funding for such projects still accounts for only a small amount of total GDP and suffers from unresolved historic shortfalls. Investments tend to skew toward funding megaprojects on large waterways, eschewing smaller-scale work on minor, but flood-prone, tributaries.

Generally speaking, China’s water infrastructure has problems with scale, space, and its capacity to adjust. This is especially true when it comes to flood prevention, a field that imposes low standards on small and midsized rivers. Many of China’s 94,000 small reservoirs have not seen upgrades to their flood defenses for many years, and now we are reaping the fruits of that negligence.

Flood prevention and mitigation isn’t just building a bunch of dams and dykes. It also involves complex hydrological monitoring systems. Flash floods are hard to prevent, accounting for more than 70% of all flood casualties.

In recent years China has made notable progress on storm warning systems and hydrological monitoring and analysis, but it remains behind developed countries, especially when it comes to the density of monitoring stations. In the future, we must pay more attention to the use of information technology in flood defense and ensure we send out all warnings and monitoring data in a timely fashion.

One of the most historically indebted sectors of flood control is the underground drainage pipes in Chinese cities. The country once prioritized above-ground installations as part of its urban infrastructure. After Beijing witnessed epic rainstorms in 2012, underground drainage received a lot of official attention.

The last few years has seen the promotion of many new methods and concepts, like sponge cities, ecological slope protection and interconnected drainage networks. In some cities, governments spend years on specialized underground piping when building new districts. But most cities lack this kind of attitude. Flood prevention and drainage standards remain low, and residents frequently find themselves wading through saturated streets when rainstorms gather overhead. This is extremely out of kilter with China’s material and basic infrastructure capacity.

Every time a flash flood or waterlogging occurs, the public closely follows issues regarding water infrastructure and urban underground drainage. The relevant government departments speak solemnly about drawing up new plans. In the past few years, the state has sunk more money into flood defenses, but it has failed to tackle the root of the problem.

That is mainly due to outstanding debt, a lack of short-term impact from green building projects, and the difficulty of renovating urban drainage systems. We must also remember that infrastructure generally takes a long time to build and shows its effects slowly. Officials in some places ignore it because they care more about rapid results and eye-catching projects.

Some local governments lack the will or strength to invest in water infrastructure. At a deeper level, such projects touch on central versus local fiscal rights and arguments over who should pay for them — something directly related to the chronic underfunding of local governments.

In recent years, some places have become pilot areas for reform. The relevant departments are researching and drawing up reform plans. The general trend is clear, but the reforms themselves still lack an overarching design and are short on the details.

Increasing investment in water infrastructure poses one realistic question: Where will the extra money come from?

In the past few years, China’s fiscal income has risen at a slower pace. Under the impact of the pandemic, governments at all levels have taken on additional costs and are increasingly feeling the pinch. Any new money for flood infrastructure will need to be prized from a limited fiscal palette.

We must therefore improve the efficiency of fiscal expenditure and cut unproductive payouts that have little to no effect. We should also resolve the problems that already exist in investing and using the money for flood infrastructure, particularly by strengthening regulation of the projects and guarding against misappropriation of funds, and the illegal exchange of funds earmarked for flood prevention work.

Proactively opening new funding channels and encouraging and guiding more social capital to participate in flood infrastructure investments may be seen as a policy that addresses the root of the issues.

People often attribute floods to unusual weather. Indeed, as climate change intensifies, extreme weather events have become more common in recent years. However, if every year brings something unusual, we should accept it as the new normal. China’s flood infrastructure should plan for these conditions. Funding and elevating it as a priority now will help the government project an image of putting the people first.