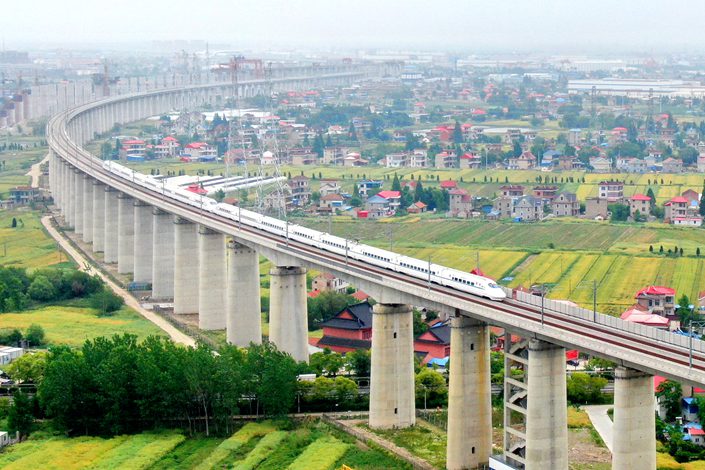 China’s economy grew 3.2% year-on-year in the second quarter this year, returning to growth after a record 6.8% contraction in the first quarter, official data (link in Chinese) showed Thursday, as the world’s second-largest economy recovered from the Covid-19 pandemic.

The second-quarter GDP growth rate was higher than the median estimate of 2.9% growth in a Caixin survey (link in Chinese) of economists. In the first half of the year, China’s GDP declined 1.6% year-on-year.

“In the first half of the year, China’s economy gradually overcame the adverse impact of the epidemic. The economic operation has returned to growth and steadily recovered,” the National Bureau of Statistics (NBS) said in a Thursday statement.

“The pandemic is spreading, and its tremendous impact on the global economy will continue to develop and evolve. The domestic economic recovery is still under pressure as external risks and challenges will significantly increase,” the NBS said.

Monthly economic data reported Thursday show retail sales, industrial output and fixed-asset investment all continued to improve in June. But the recovery is uneven, mainly driven by accelerated industrial production, indicating supply was stronger than demand, according to a Thursday research note by economists at Macquarie Group Ltd. In terms of demand, investment outperformed consumption, they said.

Value-added industrial output, which measures production at factories, mines, and utilities, rose 4.8% year-on-year (link in Chinese) in June after growing 4.4% in May. By comparison, retail sales, which includes spending by governments, businesses, and households, dropped 1.8% year-on-year (link in Chinese) in June, easing from a 2.8% decline in May. That is partly because social distancing measures restricted some consumption activities, Liu Aihua, an NBS spokesperson, said (link in Chinese) at a Thursday press conference.

Fixed-asset investment, a key driver of domestic demand that includes government-driven infrastructure spending, shrank 3.1% year-on-year (link in Chinese) in the first six months, narrowing from a 6.3% drop in the first five months. The NBS does not provide investment data for individual months.

Liu said China is confident the economy will continue to recover in the second half of this year, but the government is still under pressure to stabilize the job market.

China’s surveyed urban unemployment rate edged down to 5.7% (link in Chinese) in June from 5.9% the previous month, marking the second consecutive monthly decline, NBS data show. However, the country’s real jobless rate is likely to be higher, as the surveyed rate doesn’t count some migrant workers and fresh graduates, economists with ANZ Research said in a note.

On Wednesday, a State Council meeting chaired by Premier Li Keqiang stressed the importance of supporting employment of college graduates and migrant workers.

Economists with Nomura International (Hong Kong) Ltd. expected the recovery’s momentum would significantly weaken in the second half of this year given challenges from the ongoing pandemic and rising tensions between China and U.S. They projected year-on-year GDP growth would rise modestly to 4.3% in the third quarter and 4.5% in the fourth quarter.

Oxford Economics Ltd. has forecast GDP will grow at around 6% year-on-year in the second half of this year, bringing full-year growth to between 2% to 2.5%. It warned that the outlook will likely be affected by tightening macro policies.

Beijing has given more weight to containing financial risks recently as economic growth has resumed and concerns about policy efficiency have risen, the economists with ANZ Research said. Last week, the central bank struck a cautious tone over monetary policy at a press conference (link in Chinese), saying the credit supply should not be too large and the interest rate should not be too low.