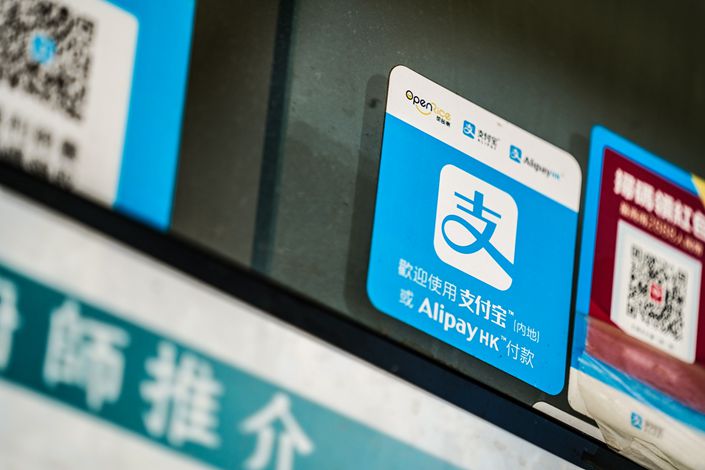 A sign for digital payment service Ant Financial's Alipay, an affiliate of Alibaba Group Holding Ltd., is displayed at a store in Hong Kong, on July 21. Photo: Bloomberg

Credit Suisse Group AG has been fighting for a major role in the offering and Ant is leaning toward naming them as a joint global coordinator for its Hong Kong listing, which could raise about $10 billion, according to people familiar with the matter, who asked not to be identified as the information is private. Global coordinators help manage the marketing of a deal and collection of investor orders. They’re one step down from sponsors, who get top billing in the prospectus and are responsible for liaising with the exchange.

Billionaire Jack Ma’s Ant, the crown jewel of his Alibaba empire, is pursuing a simultaneous dual-listing in Hong Kong and on the Shanghai stock exchange’s STAR board, seeking a valuation north of $200 billion. Alibaba Group Holding Ltd. owns a third of Ant.

Credit Suisse advised the Alibaba independent committee when the company bought a 33% stake in Ant, and did not advise on Ant’s latest fundraising round, while the other four banks did, the people said. That gave them priority in getting a role as an IPO sponsor, they said.

Ant is still finalizing its roster of banks and details of the line-up could change, the people said. More banks could be added at a later stage as banks including Goldman Sachs Group Inc. aggressively pitch for a role, they said. Representatives for Ant, Credit Suisse and Goldman Sachs declined to comment on the matter.

Credit Suisse rose 1.1% in Zurich on Tuesday, the highest in a week. The benchmark Swiss performance index fell 0.3%.

Credit Suisse’s absence from the list of sponsors marks a break with history, given that it has been awarded plenty of top-shelf work in the past by Ma’s empire. The Swiss lender was one of the top underwriters on Alibaba’s record-breaking $25 billion U.S. IPO in 2014. It and Morgan Stanley were the banks that received the most fees on the offering, Bloomberg News reported at the time. Credit Suisse has also advised Alibaba on at least $14 billion of acquisitions, more than any other bank, according to data compiled by Bloomberg.

The bank is smarting after a tumultuous year. Its work as lead underwriter on the IPO by Luckin Coffee saw it named in a lawsuit after the beverage chain was engulfed in scandal. Credit Suisse later lost its role in Chinese online health-care firm WeDoctor’s IPO.

Wall Street banks fight aggressively for big name IPOs due to the money and the boost in league table rankings. A deal like Ant could generate tens of millions of dollars in fees, as well as prestige that can influence prospective clients’ choice of bankers on future transactions.