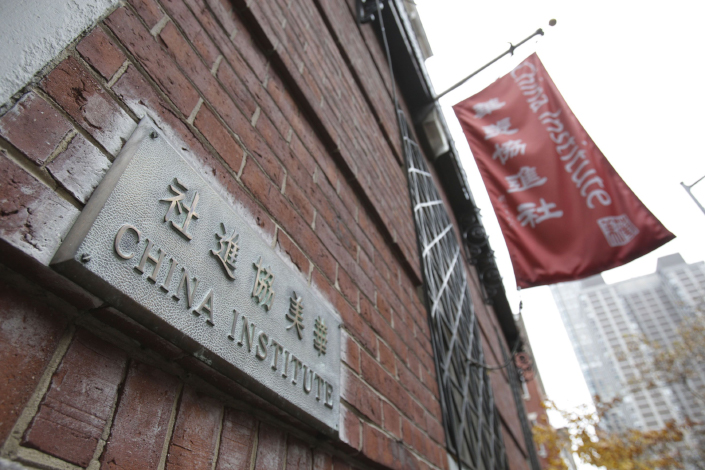 A plaque and a flag hang outside the China Institute, home of the Confucius Institute, at 125 E 65th Street in New York, U.S., on Monday, Nov. 26, 2007. Photographer: Bloomberg

(Bloomberg) — The Trump administration announced closer scrutiny of a program funded by the Chinese government that’s dedicated to teaching Chinese language and culture in the U.S., further escalating tensions with Beijing.

The Confucius Institute U.S. Center, the American headquarters of the program, will be required to register as a “foreign mission,” David Stilwell, assistant secretary of state for East Asian and Pacific Affairs, said on a conference call with reporters Thursday.

The designation amounts to a conclusion that Confucius Institutes are “substantially owned or effectively controlled” by a foreign government. It will subject them to administrative requirements similar to those for embassies and consulates, and it mirrors similar actions toward several Chinese media outlets earlier this year.

Of about 550 Confucius Institutes around the world, 80 are based at U.S. colleges, including Stanford University and Savannah State University in Georgia, according to the National Association of Scholars, a nonpartisan research group that has studied them.

Although the designation of the group’s headquarters doesn’t require action by colleges that host Confucius Institutes, Stilwell said he hopes educational institutions will take a “hard look” at their relationship.

The move is likely to worsen Washington’s already tense relationship with Beijing as the two countries clash over everything from Hong Kong to intellectual property. This week, Health and Human Services Secretary Alex Azar became the highest-ranking U.S. official to visit Taiwan in more than four decades, while Secretary of State Michael Pompeo blasted the Chinese Communist Party’s “campaigns of coercion and control.”

Stilwell said that the U.S. welcomes “positive exchanges” with other countries in the area of education, but that it was important to label the Chinese government-run institutions accurately. “We’re simply calling these things what they are. These are arms of the Chinese Communist Party,” he said.