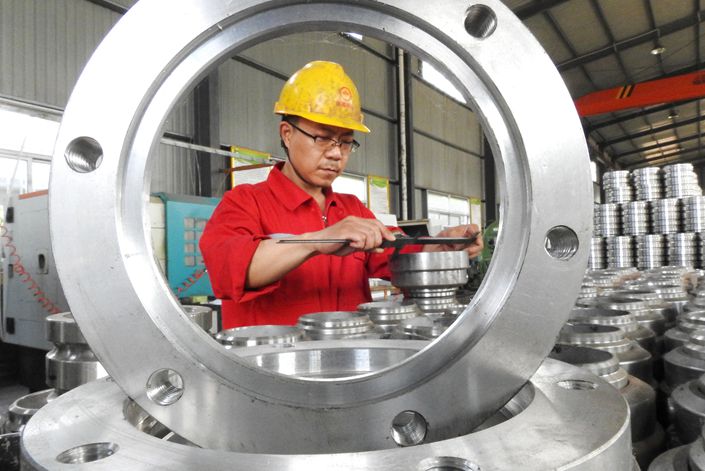 A worker processes parts for a batch of fluid handling equipment on July 20 at a company in Lianyungang, East China’s Jiangsu province.

China’s manufacturing activity continued its rapid expansion in August as the economy recovered further from the fallout of the Covid-19 pandemic, with the gauges for overseas demand and employment both showing improvement.

The Caixin China General Manufacturing Purchasing Managers’ Index (PMI), which gives an independent snapshot of the country’s manufacturing sector, rose to 53.1 last month from 52.8 in July, reaching a high unseen since the start of 2011 and remaining in expansionary territory for the fourth month in a row, a report released Tuesday showed. A number above 50 signals an expansion in activity, while a reading below that indicates a contraction.

The index’s performance suggests that the sector’s recovery may see strong momentum going into the latter months of 2020, as policymakers throw support behind manufacturing as a way to offset the pandemic’s impact and achieve policy goals around high-tech self-sufficiency.

Eased monetary and fiscal policies have helped money flow into manufacturers’ hands. Over the first seven months of this year, Chinese lenders issued 1.6 trillion yuan ($233 billion) in new manufacturing loans, dwarfing what they lent out in all of 2019.

“With fiscal support on course to be stepped up further in the coming months, we still think there is some further upside to industrial activity,” economists at research firm Capital Economics Ltd. said Monday in a note.

China’s official manufacturing PMI (link in Chinese) dropped slightly to 51 in August from 51.1 the previous month. The official PMI polls a larger proportion of big companies and state-owned enterprises than the Caixin PMI, which is compiled by London-based data analytics firm IHS Markit Ltd.

The breakdown of the August Caixin PMI showed that both supply and demand recovered quickly, as the subindexes for output and total new orders again hit over nine-year highs, after also doing so the previous month.

In July, China’s goods exports grew 7.2% year-on-year, up from 0.5% growth in June and the fastest expansion since December, official data showed last month.

Sluggish employment dragged down the manufacturing sector’s recovery, but it showed signs of stabilization, as the employment subindex came the closest to expansion since December when China’s Covid-19 outbreak began.

“While some companies remained cautious about expanding hiring and continued to lay off workers to reduce costs, the survey found that some other companies increased recruitment to meet production needs,” Wang said. In August, backlogs of work increased at a faster pace than the previous month.

Manufacturers remained generally upbeat about their business outlook over the next 12 months, but the degree of optimism edged down to a three-month low. “While many companies anticipate global economic conditions to improve further, many expressed concerns over how long the pandemic would impact operations and customer demand,” IHS Markit said in a statement accompanying the PMI data.