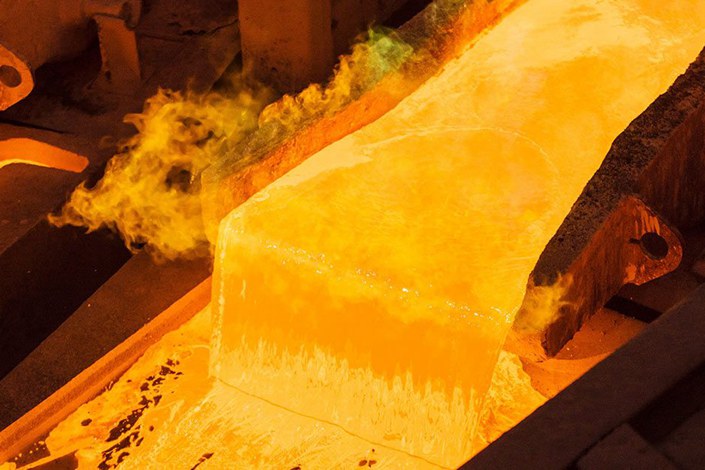 (Bloomberg) — The global copper market could be on the cusp of a historic supply squeeze as Chinese demand runs red hot and exchange inventories plunge to their lowest levels in more than a decade.

A growing chorus of traders and analysts say those dwindling spot reserves could trigger a further surge in prices, building on a rally that lifted copper this week to two-year highs above $6,800 a ton. Red Kite Capital Management LLP fund manager George Daniel said the market is starting to resemble that of the early 2000s, when a similar Chinese buying spree emptied the world’s warehouses of copper and sent prices vaulting to record highs.

The 24 million ton-per-year copper market has experienced bouts of tightness ever since the early days of China’s industrial expansion, but that country’s rampant appetite after emerging from coronavirus lockdown could usher in a period of chronic undersupply. The Caixin manufacturing purchasing managers’ index for August reached its highest reading since January 2011, with copper usage surging as factories pump out cars, household appliances, smartphones and electrical cables.

“This time it’s been different because China has been sucking everything up,” Daniel said in London. “It feels like we’re getting into a period where there’s just no copper around.”

Current conditions could push prices to $7,500 a ton, he said. Citigroup analysts are even more bullish, advising clients this week that a price of $8,000 is plausible if global stockpiles drop to near the levels seen in 2011, when copper reached a record $10,190 a ton. Copper declined 0.8% to $6,643 a ton on Thursday.

Evidence of a looming supply squeeze is mounting on the London Metal Exchange, where inventories are at their lowest levels in almost 15 years — only enough to last users a little more than a day. A year ago, they would have lasted five.

In the past, copper stored elsewhere in the global supply chain was diverted to the exchange’s storage depots. But now there are signs the metal may not flow back to the bourse so freely, given the strength of Chinese demand.

LME data shows there were about 120,000 tons of copper stored privately in Europe at the end of June, but none has materialized on the exchange, even with the region’s lackluster economic recovery. At the same time, the LME’s Asian depots are virtually empty. There are about 80,000 tons in Comex depots in the U.S., but manufacturing in the world’s top economy also is starting to snap back strongly.

Consumers and traders may be more reluctant to offload excess inventories out of fear that a fresh wave of coronavirus infections could reimpose havoc on supply chains. The desire to bolster reserves of raw materials was one factor driving the rapid rebound in orders as China emerged from lockdown, Trafigura, the world’s top copper trader, said in June.

With investment in copper-intensive sectors such as renewable energy and electric vehicles set to swell as countries start rebuilding their economies, manufacturers in previously weak markets like Europe also may look to boost their inventories, thus creating an additional pull on spot supplies.

Some traders and investors are still skeptical that plunging inventories on the LME reflect broader supply-and-demand conditions. But that may change as evidence points to consumers stocking up.

“We have lost some of the absolute perma-bears during this rally,” Luke Sadrian, chief investment officer at Commodities World Capital, said by phone. “You have to at least move to the center point.”

Still, rising production may relieve some of the strain. There are signs scrap dealers are offloading inventories to cash in on higher prices, and smelters in China are producing at an elevated rate, even as constrained supplies wilt processing margins. Mine production in South America also is starting to recover.

Copper and other exchange-traded commodities also have a built-in relief valve whenever inventories run low. Increased demand quickly drives up the value of spot contracts relative to futures, encouraging stockholders to sell excess inventories. That incentive to deliver has risen fast, with spot contracts last week trading at the biggest premium to benchmark futures in almost 18 months — a phenomenon known as backwardation.

While specialist commodities funds are turning bullish on copper’s tight fundamentals, long-term macro investors are starting to take a more favorable view of the metal as an asset that should hold up against a falling dollar and rising inflation, providing a further tailwind for prices, Daniel said.

“Everything is working for the copper price at the moment,” he said.