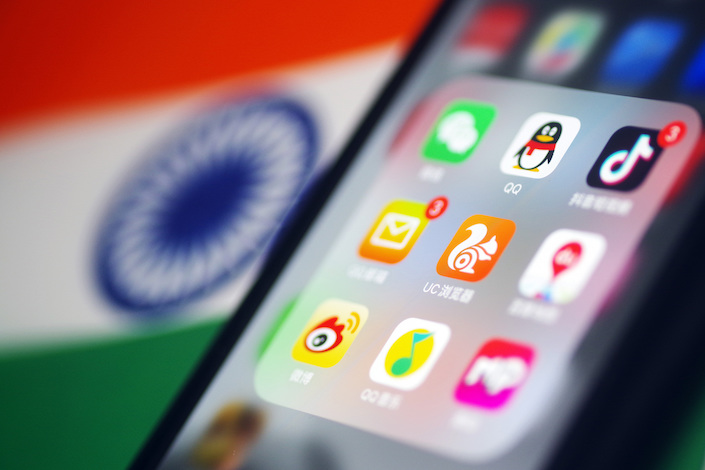 The banned apps are “prejudicial to sovereignty and integrity of India” as well as “security and public order,” the ministry said. The agency said it received complaints about the apps “stealing and surreptitiously transmitting users’ data in an unauthorized manner to servers which have locations outside India.” In late June India announced an unprecedented ban of 59 Chinese apps on national security grounds.

The draft rules would simplify application procedures for foreign bond investors and unify rules governing various investment channels, according to a set of draft regulations (link in Chinese) issued Wednesday by China’s central bank, foreign exchange regulator and securities watchdog. The rules are aimed at making it easier for overseas institutional investors to invest in yuan-denominated bonds, the People’s Bank of China said on its website.

The Chinese Embassy in the United States took a shot at the U.S. State Department’s latest restrictions on its senior diplomats in a statement released Thursday, calling them “unjustified” and urging the U.S. side to “correct its mistake and revoke the decision.”

The response came after the State Department imposed fresh restrictions Wednesday on senior Chinese diplomats’ activities, requiring them to get approval from the department before visiting university campuses, meeting local government officials or holding cultural events with more than 50 people outside mission properties.

The Caixin China General Services Business Activity Index, which gives an independent snapshot of operating conditions in the services sector, fell to 54 last month from 54.1 in July. The index has been above 50 in expansionary territory for four months in a row, though it has come down from a decade high in June. The index’s performance showed that the sector continues to recover from the fallout of the Covid-19 pandemic as people’s spending on services.

The Caixin China General Composite PMI, which covers both manufacturing and service companies, rose to 55.1 last month from 54.5 in July.

Chinese investor hunting for next Moutai wins big on cocktails

Opinion: As Chinese firms rush to list, corporate governance should come to the fore

The battle to save one of China’s largest listed pharmaceutical companies took another step forward this week as a special purpose vehicle set up by local state-owned enterprises (SOEs) agreed to take control of the scandal-hit business for two years under a rescue orchestrated by the Guangdong provincial government.

Kangmei Pharmaceutical Co. Ltd., whose survival has been in question since the revelation of a $12.9 billion fraud in 2019, announced Thursday that it signed several agreements with Jieyang Yilin Pharmaceutical Investment Co. Ltd., an entity formed in August that is controlled by the Jieyang city and Guangdong provincial governments through the SOEs.

Under the agreements, Kangmei Pharmaceutical’s controlling shareholder, Kangmei Industry Investment Holdings Co. Ltd., will transfer the voting and other rights attached to a 29.9% stake in the company to Jieyang Yilin, which will act as a custodian, according to a filing (link in Chinese) with the Shanghai Stock Exchange.

The high-tech manufacturing hub of Shenzhen is set to enact a local environmental regulation Oct. 1 that will empower nongovernmental organizations (NGOs) to file lawsuits against polluters, the first public interest law of its kind in China.

The regulation (link in Chinese), approved by the Standing Committee of the Shenzhen Municipal People’s Congress, the city’s top decision-making body, will allow public prosecutors, government departments and NGOs to sue illegal polluters and terminate ongoing environmental destruction. In doing so, Shenzhen will serve as a trailblazer for China’s national legislation on such lawsuits, known as environmental public interest litigations (EPILs), according to the Shenzhen government website (link in Chinese).

The chairman of TCL Technology Group Corp. said a trader accidentally sold 5 million company shares using his account — an incident that comes as the stock nears a record high.

The sale was made at 1:03 p.m. Tuesday by a trader managing Chairman Li Dongsheng’s accounts who typed in the wrong stock code, the Guangdong-based panel maker said in a filing with the Shenzhen exchange. Li bought back the shares for 35.8 million yuan ($5.2 million) less than two hours after the trader sold them for 35.9 million yuan, the company said.

He will hand over profits from the trade to the company, the company said. Li issued an apology Wednesday for the trade on his personal Weibo account and said he personally made the decision to buy back the stock. He stressed his confidence in the business.