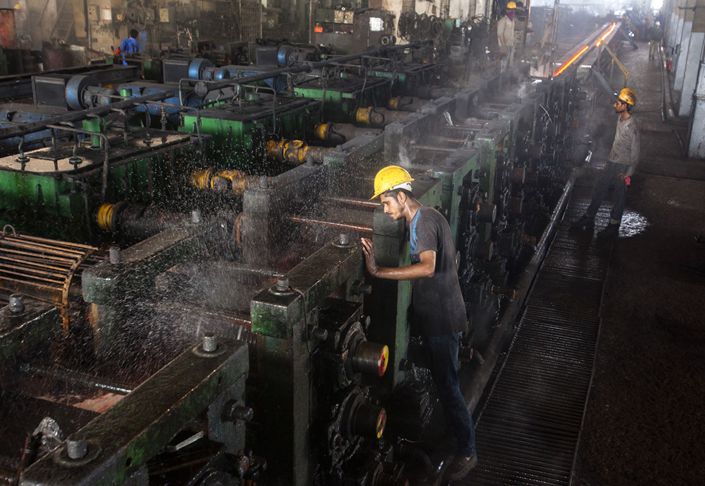 (Bloomberg) — Agha Steel Industries Ltd. plans to raise as much as 5 billion rupees ($30 million) in an initial share sale as a construction boom in Pakistan helps boost demand for its products.

The Karachi-based company plans to raise between 3.6 billion rupees to 5 billion rupees as early as this month, CEO Hussain Agha said. The steelmaker plans to almost triple its capacity to produce gray steel bars, used to build everything from homes to dams.

Pakistan’s steelmakers are benefiting from the building of dams and power plans financed by China. Prime Minister Imran Khan’s move to allow tax evaders to invest illicit cash into building homes is also driving demand for construction material, helping improve the prospects for an economy that contracted for the first time in seven decades amid the coronavirus pandemic.

“For steel, everything is gearing up and there will be solid demand,” Agha said in an interview. Khan’s real estate package “is perhaps one of the biggest game changer for our country.”

Tax cheats with illegal wealth, estimated to be as large as 56% of the nation’s $278 billion economy, are responding to Khan’s offer. Cement sales rose to a record in July while steel followed. Sales to builders accounted for 30% of Agha Steel’s revenue in August from 12% in the year ended June.

Agha Steel, which supplied material for many coal-fired power plants financed by China, has bid for five upcoming dam projects. A contract to supply steel for the Mohmand dam can generate 10 billion rupees in revenue, or 63% of its sales last year, said Agha.

The company is going through its second expansion, which will see its steel-bar capacity increase to 650,000 tons a year from 250,000 tons. It almost doubled billets capacity to 450,000 tons two years ago.

Agha Steel revived its IPO plans after three years, buoyed by a surge in the equity markets. Pakistan’s KSE-100 Index has rebounded 54% from its March low and is Asia’s best-performing benchmark.

The IPO will be biggest for a steel firm since Amreli Steels Ltd. raised 3.8 billion rupees in 2015. Amreli has dropped 60% since reaching a record on May 2017, and trades at close to its IPO price.

Agha Steel plans to sell 120 million shares at a floor price of 30 rupees apiece and is being advised by Arif Habib Ltd.