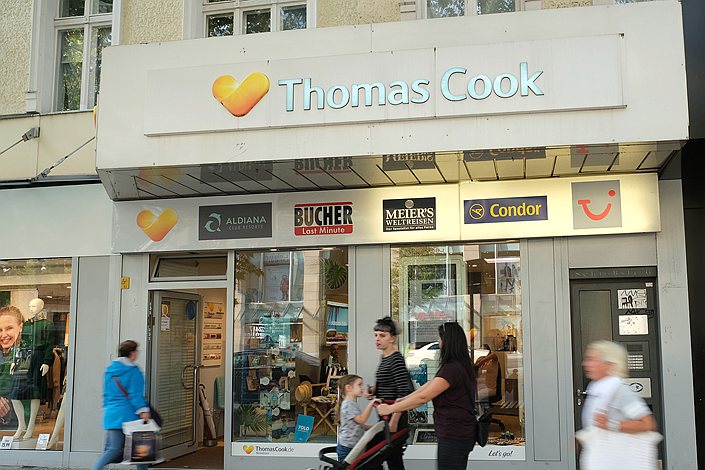 Pedestrians walk past a Thomas Cook travel agency in Berlin on Sept. 23.

The nearly 180-year-old brand began its new life with a service allowing customers to book hotels, buy air tickets and vacation packages to destinations on London’s list of safe travel corridors, including Italy, Greece and Turkey, the company said in an announcement. It will add further destinations as appropriate with the easing of the global pandemic.

The brand’s rebirth follows a dramatic collapse in September 2019, at which time Fosun was one of the company’s minority shareholders. Fosun Tourism, which also owns the French Club Med resort chain, acquired the brand’s name and online assets two months later, along with its Casa Cook and Cook’s Club hotel brands, as it builds up its portfolio of tourism-related assets.

“We have reinvented one of the most recognizable names in British travel,” said Alan French, Thomas Cook’s U.K. CEO. “Thanks to new ownership and a new robust financial structure, customers can be reassured their money is protected. We will use a trust model to ring-fence customers’ payments, meaning Thomas Cook only receives customers’ money once they’ve returned from holiday.”

His comments came after thousands of travelers who had booked trips around the time of last year’s collapse ended up losing their money, with an estimated 150,000 left stranded in the middle of vacations. The bankruptcy also led to 9,000 job losses in the U.K.

Fosun Tourism is part of the larger Fosun group, which has major presences in a range assets including pharmaceuticals and financial services. The group’s other tourism-related assets include the renowned performance troupe Cirque du Soleil.

Before the new website launch, Fosun Tourism launched a Thomas Cook app in China in July, as part of its broader strategy to leverage its stable of well-known global brands in its more familiar home market. China has become one of the world’s biggest markets for domestic tourism, and Chinese are a major new group of travelers abroad on the back of the country’s rapid economic rise that has created a vibrant middle class.

Fosun Tourism’s portfolio of properties includes seven Club Med resorts in China out of 66 worldwide. But like many businesses from the tourism sector, the company also suffered a sharp downturn during the global pandemic. Its revenue in the first half of the year fell by 50% year-on-year to 4.5 billion yuan ($664 million), while it swung heavily into the red for that period by posting a loss of nearly 900 million yuan.

“Thomas Cook has a proud heritage and after acquiring the brand last year we wanted to quickly return it to its home in the UK,” said Fosun Tourism CEO Jim Qian. “Supporting the growth of the brand in China and its relaunch in the UK is a big step in our plan to turn Thomas Cook into a global success story and a key milestone in the development of the Fosun Tourism Group’s strategy.”

Founded in the 1840s as an operator of train trips through the English midlands, Thomas Cook’s demise last year raised questions about the viability of the packaged tour model as tourists pivot more toward individual and self-directed travel.