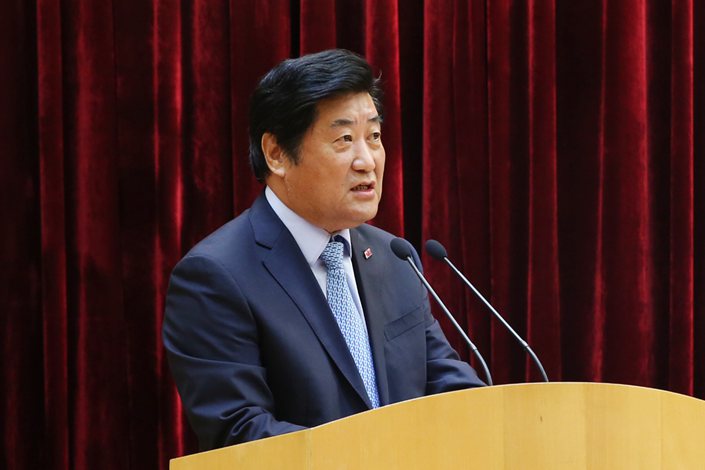 Four former senior executives of troubled Kangde Xin Composite Material Group Co. Ltd., including its founder and actual controller Zhong Yu, are set to face criminal trial for their alleged roles in an 11.5 billion yuan ($1.7 billion) fraud that triggered a series of bond defaults and a debt crisis at the company.

Police in the city of Zhangjiagang, where the Shenzhen-listed laminating film manufacturer is based, have sent the case to the public prosecutor’s office for further investigation and prosecution, the company said in a Tuesday filing (link in Chinese). Xu Shu, the CEO of the company at the time of the fraud, Wang Yu, former finance director, and Zhang Lixiong, previously head of the treasury department, are also facing prosecution.

The former executives are also under investigation by the China Securities Regulatory Commission (CSRC), which has been holding hearings in Beijing to determine what administrative punishment should be imposed on the Jiangsu province-based company, which is struggling to survive after a bond default in January 2019 led to the exposure of one of the most high-profile corporate frauds in Chinese stock market history.

The CSRC is preparing to hand out punishments, telling (link in Chinese) the company in June that Zhong, Wang and Zhang, the main executives responsible for the fraud, would likely face a lifetime ban on serving as executives, directors and supervisors of listed companies, and on being involved in securities work.

In its Tuesday filing, Kangde Xin said Zhong has been accused of offenses under Article 161 of the country’s Criminal Law including failing to disclose information and disclosing information that was false, concealing important facts from shareholders, fraudulent purchase of foreign exchange, breach of trust and damaging the interests of a listed company. Zhong stepped down as chairman of Kangde Xin in February 2019 and was detained by police in May that year, although he remains the actual controller of the company.

Zhong may face 10 or more years behind bars for his alleged crimes if the judges find him guilty and allow him to serve the prescribed sentences for each offense concurrently, lawyers familiar with the case told Caixin. Among the crimes he is accused of, fraudulent purchase of foreign exchange is the most serious and carries a jail sentence ranging from 10 years to life imprisonment, they said.

The details of Kangde Xin’s fraud and the events leading up to its discovery have been exposed through a series of company statements, regulatory investigations and hearings over the past 20 months or so.

In January 2019, the company failed to repay two short-term debts worth a combined 1.55 billion yuan. The news shocked investors because the Shenzhen-listed company had 15 billion yuan in cash and bank deposits just four months previously, according to its accounts, raising concerns about the credibility of its financial statements. Later that year, it defaulted on several other yuan- and dollar-denominated bonds.

A subsequent CSRC investigation found the company had overstated its profits for the four years through 2018 by a total of 11.5 billion yuan through systematic fraud such as recording fake export sales. Kangde Investment Group Co. Ltd., the controlling shareholder of Kangde Xin, had also embezzled funds (link in Chinese) amounting to 53.1 billion yuan from 2014 to 2018, according to a CSRC statement issued in July 2019 disclosing details of its findings from an investigation into the fraud. However, the CSRC did not mention any embezzlement in an updated statement dated June 2020.

A previous version of this story gave the incorrect title for Xu Shu. She was Kangde Xin’s CEO. This story has been updated with additional information.