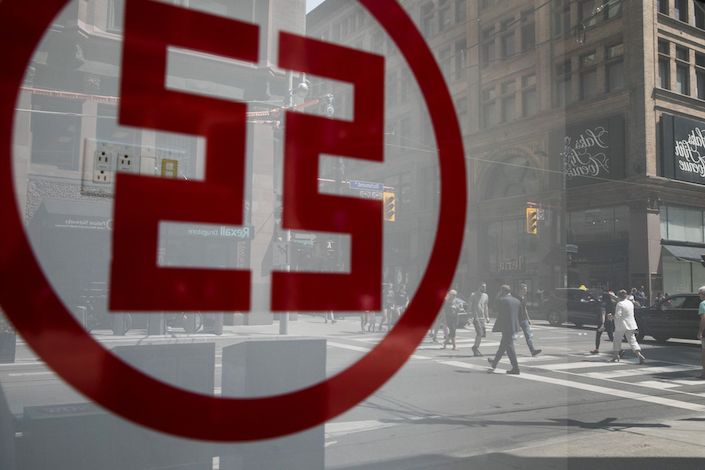 Pedestrians are seen reflected in the window of a Industrial and Commercial Bank of China Ltd. (ICBC) branch in the financial district of Toronto

(Bloomberg) — A massive push by China’s biggest banks to boost capital amid the worst downturn in at least a decade faltered out of the gate.

Industrial & Commercial Bank of China Ltd. (ICBC) slashed a planned bond sale of the riskiest type of debt by more than a third, raising only $2.9 billion in dollar-denominated bonds out of a planned $4.4 billion.

Some of China’s biggest lenders are trying to borrow at least $29 billion via bonds this month to shore up capital as profits slide and bad debt balloons. Banks are being enlisted by the government to provide cheap loans to millions of businesses and consumers struggling with the fallout of the pandemic, triggering the worst earnings slump in a decade.

The sale by ICBC, the world’s largest bank by assets, was most likely hampered by competition from a jump in Chinese dollar debt sales, which have contributed to a record amount of global issuance this year. The Additional Tier 1 (AT1) bonds priced at a yield of 3.58%, which was just below the rate at which rival Bank of China issued debt earlier this year, according to Pramod Shenoi, head of APAC research at Creditsights.

“We’ve seen that investors have had less cash to put to use more recently,” Shenoi said. “They have allocated their cash and cash levels are low, so overall supply would have used up their cash.”

Even at the reduced size, the Beijing-based bank’s offering is the biggest of its kind by a Chinese lender since Postal Savings Bank of China Co.’s $7.25 billion bond in 2017, according to data compiled by Bloomberg. It’s also the first offshore AT1 deal from ICBC in six years. The notes typically pay higher yields than regular debt because they stand first in line for losses if the issuer goes bust.

“There are also concerns that this may not be the best time to be in longer maturity assets,” said Thu Ha Chow, a portfolio manager at Loomis Sayles Investments Asia Pte. “Chinese banks are supporting the real economy during this pandemic and are expected to take some credit losses, so capital buffers will need to be replenished.”

While they meet minimum domestic capital requirements with a safe margin, China’s four biggest banks face a shortfall of $220 billion to meet global capital rules kicking in at the start of 2025, S&P Global Ratings said in a report last month. That gap may increase to more than $900 billion over the next few years as economic pressure weighs on earnings, S&P said.

Harry Hu, a Hong Kong-based analyst at S&P Global, said the whole industry is in need of capital.

“The reason is because of high credit growth and there’s slowing profitability,” he said. “Credit growth is high this year, higher than what we originally expected. We were looking at about 13% loan growth or maybe slightly more.”