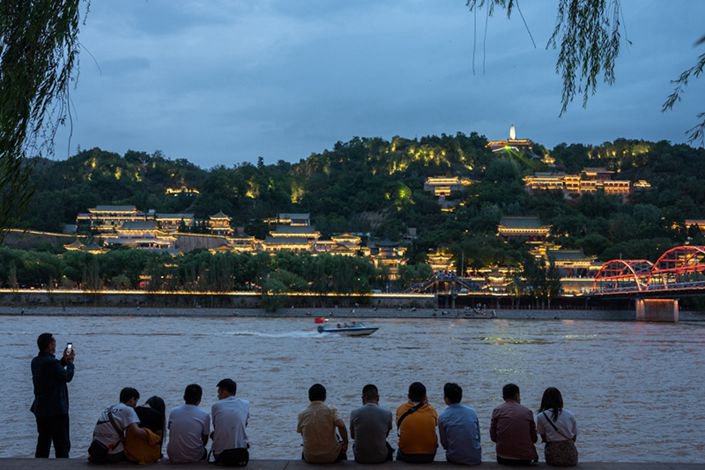 On an evening evening in May, people in Lanzhou flock to the banks of the Yellow River to enjoy the cool weather. Photo: Guo Xianzhong/Caixin

The day after this magazine published our cover story about the infection of thousands of people with brucellosis in Lanzhou, Northwest China’s Gansu province, the city’s health commission issued a notice about the incident and outlined the next stage of work. The notice also promised to urge the Lanzhou Biopharmaceutical Plant, the company responsible for the incident, to pay compensation.

This gesture of responding to the public in a timely manner deserves recognition. The notice also mentioned that the plant has “seriously dealt with” the eight people responsible for the incident. However, there has been no announcement about whether they and the factory will be punished by the law and whether the judicial department has stepped in.

To deal with this incident, legal accountability is essential — only then can those responsible pay the price for their actions. Legal action will also be a warning to other companies and promote the rule of law in China’s public health sector.

One year has passed since this incident occurred. In July and August 2019, the plant, a subsidiary of China Animal Husbandry Industry Co. Ltd., used expired disinfectant in the production of brucellosis vaccines for veterinary use, resulting in inadequate sterilization of waste gas emissions from fermentation tanks.

Lanzhou officials have confirmed 3,245 positive infections, and there must be others living in fear of the unknown. Most of the infected people do not know how to treat the disease, and many will spend the rest of their lives living with pain and fatigue. Brucellosis can incapacitate and even disable those it afflicts. For the families, it is a devastating situation. The perpetrators of the incident must take responsibility. Otherwise, how can justice be done?

Although the Lanzhou brucellosis outbreak is essentially a public health incident, China’s current laws and regulations lack clear, uniform guidelines on who should be accountable. Instead, we have to consult our laws on environmental protection, drugs and the handling of dangerous goods.

That’s because rules like our regulations for responding to public health emergencies mainly deal with the role of local governments and their health institutions. Meanwhile, our laws on preventing and controlling infectious diseases focus more on how to respond to incidents instead of who is to blame. This incident is therefore an opportunity to address these problems.

Of course, we can still apply legal accountability for the Lanzhou outbreak in accordance with current laws and regulations. An amendment to China’s criminal law has lowered the threshold of conviction for those who pollute the environment. In recent years, a top-down approach to environmental protection has exposed many polluting companies, especially pharmaceutical firms. They have been repeatedly banned, but some continue to flout the law.

That’s because the cost of breaking the law is far lower than the profits to be made from doing so, and local governments sometimes even shelter such firms. Despite this, some staff at unscrupulous pharmaceutical companies have received criminal penalties for their actions.

Legal evidence must determine the actions of Lanzhou Biopharmaceutical and the responsibilities the enterprise and its staff should take. This matter is of national concern, and local governments should strictly enforce the law.

This incident gives us a lot to think about. Chinese law has strict requirements for vaccine production. Regulations for ensuring the quality of veterinary drugs contain detailed restrictions on production equipment, protective measures and the use of disinfectants.

Even so, large-scale pollution events can still occur, with serious consequences. When dealing with the aftermath, the relevant government departments must reflect deeply, uncover regulatory loopholes and supervisory weaknesses, and then strengthen supervision in a targeted manner.

We mustn’t artificially set the threshold for compensation too high or screen applicants for their payments too tightly. It is the right of the victims to expect compensation standards to strictly follow the law. Compensation should also not be limited to the cost of treatment; we must comprehensively assess people based on their future difficulties in life.

In short, we must be pragmatic. It would be best to hand over the process to an independent medical appraisal agency to avoid excessive local government interference. Additionally, securities regulators must examine China Animal Husbandry, a listed company that did not perform well when disclosing this incident.

We can also learn from the experiences of others. The United States, Europe, Japan and other countries have given us examples of the importance of extensive public participation and strict legal punishments for environmental and public health violations.

The prerequisite for public participation is to establish a specific mechanism for lots of people to join in. Accordingly, businesses should also improve information transparency. In areas with relatively comprehensive governance like the U.S., Europe and Japan, companies that violate safety regulations and cause serious environmental pollution not only face huge fines, but those responsible may also face severe penalties under criminal law, the enforcement of which is unified and strict.

Illegal activities thereby carry huge costs that discourage tricksters and force companies to improve their internal management and control standards. Even if we have detailed guidelines and operating norms at the systemic level, they will be toothless without real deterrents.

China’s achievements fighting its coronavirus epidemic came from valuing the supremacy of the people and human life. Lanzhou’s brucellosis outbreak was unfortunate and catastrophic. We expect that the handling of this incident will also show similar respect for life.

For Gansu and Lanzhou, whose economic development is relatively lagging, there is no need to worry that legal accountability will scare away investors. On the contrary, handling this incident strictly in accordance with the law will improve the business environment.

For China, which is determined to improve its national governance capabilities, the aftermath of the outbreak provides a different opportunity: a chance to reach a new milestone in implementing the rule of law.

The Chinese version of this article was published in Caixin Weekly on Sept. 21, 2020, and is only available for Caixin Global’s app users. To unlock more bilingual articles, download the Caixin app.