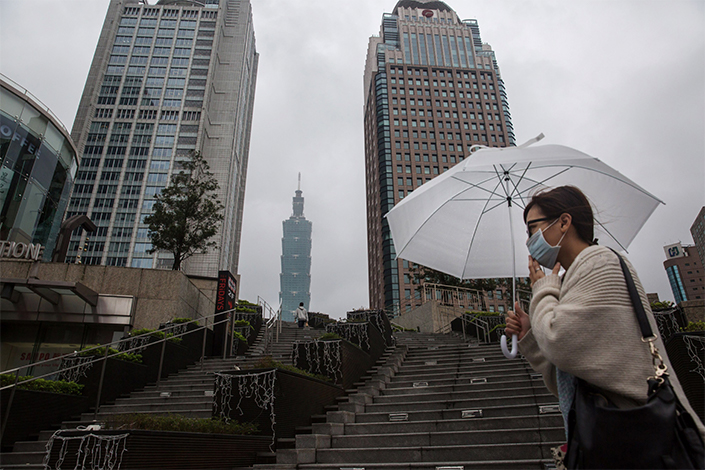 A pedestrian holding an umbrella walks past the Taipei 101 building, center, and other commercial buildings in Taipei, Taiwan, on Jan. 13, 2016. Photo: Bloomberg

(Bloomberg) — Taiwan’s banks’ contributions to offshore loans for Chinese mainland firms fell to their lowest levels in at least 10 years as lenders turn increasingly anxious to limit their credit expo-sure to the economic fallout of the pandemic and rising political tensions.

The share of Taiwan’s financial institutions in China’s offshore syndicated and club loans tumbled to the lowest since at least the first three quarters of 2010 to $362 million-equivalent for 2020 year-to-date, according to data compiled by Bloomberg based on deals with disclosed lender commit-ments. This is a 74% drop compared to the first three quarters of last year, continuing a downward trend that began in 2018.

The total volume of Chinese offshore syndicated and club loans with at least one Taiwan lender involved has also tumbled to $4.9 billion for this year so far, falling 65% compared to $14.1 billion the first three quarters of 2019, Bloomberg-compiled data show.

The drop in lending by Taiwan’s banks is driven by concerns over the pandemic’s economic im-pact on the Chinese mainland, as well as lenders generally, not just those in Taiwan, turning in-creasingly cautious over the uncertain geopolitical backdrop, said Vicky He, Credit Suisse’s head of loan syndication for North Asia.

As of June, 36 of Taiwan’s banks were exposed to the tune of NT$1.6 billion ($55 billion) to the Chinese mainland, including credit lines, investments and cash deposits. On average, that was 37.5% of their 2019 net worth, according to Taiwan’s Financial Supervisory Commission, down from 47% in the same period in 2018.