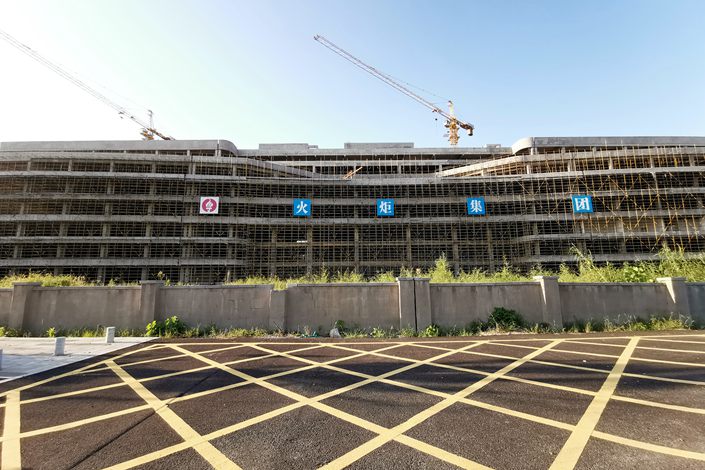 The knock-on effects of China’s efforts to rapidly grow its semiconductor industry have started to appear. In many places, projects — some of which have cost hundreds of billions of yuan — have begun to stagnate or die unfinished. Recently, the National Development and Reform Commission (NDRC), the Ministry of Industry and Information Technology and other government bodies have responded with a positive attitude toward governing the sector.

The essence of this issue is how to deal with the relationship between the government and the market. China is shifting from a selective industrial policy to a functional one. This transition has progressed significantly in recent years, and the chip industry should not be an exception.

Microchips are both a key component of the information industry, and an area where China’s economy and technology fall short. Against the background of the trade conflict with the United States, chips could become a “stranglehold” technology for the Chinese people, making its importance self-evident.

To this end, the state has introduced many supportive measures, and the enthusiasm for launching projects in local areas is unprecedentedly high. Chips have the potential to both push forward China’s high-tech ambitions and become a strong national industry. Some local governments have an irresistible impulse to forge ahead.

However, as stated by the NDRC, some companies with the “three-nos” — no experience, no technology, and no human talent — are involved in the integrated circuit industry. In some places, local governments do not sufficiently understand the rules of chip development, launch projects blindly and invite these unqualified companies, producing flimsy or superfluous technologies.

Some projects have even stagnated, leaving workshops vacant and resources wasted. The current chaos in the industry will deal a heavy blow to China’s chip sector, which is trying to catch up with the U.S. and other countries. For this reason, we must strictly promote development while making sure to pop any emerging bubbles.

It is normal for projects or whole businesses to fail as the result of fair competition between market players. However, unfinished projects not only represent the disorderly investment of hot money, but also the widespread interference of local governments in the name of industrial support, a trait that highlights the failures of local policies.

Two projects in the cities of Wuhan and Huaian illustrate this issue. In both cases, local governments produced neither clear development plans nor detailed research. Instead, they pursued short-term gains, providing businesses with land, capital and resources like connections with credit partners.

However, as a typical “three highs” industry — high-capital, high-skills and high-tech — chips are destined to fail without the right environment in which to develop, the continuous investment of vast sums of money, and the ongoing optimization of talent and technology. Notably, the less-developed parts of China with weak capacity for supporting the chip sector are ironically more enthusiastic about great leaps forward. As a result, many places are racing to offer favorable conditions to attract capital, magnifying the potential risks.

Direct interference by local governments in the chip industry will also trigger malicious competition among enterprises and disrupt the sector’s order. This kind of overreach seems to have immediate effects, but in reality it is full of hidden dangers. The painful past experiences of industries like photovoltaics should be instructive here.

“We must target the chip bubble, but more importantly, we must crack down on the policy bubbles in which local governments overly interfere with the market.”

Our most pressing concern is to decisively correct these deviations. The NDRC clearly stated that it is necessary to consolidate the responsibilities of all parties, guide local governments to strengthen their understanding of the risks of major project construction, and provide notice of and accountability for major losses or risks. We look forward to the relevant departments announcing a few typical cases as soon as possible. Although this is not a permanent cure, it can be seen as a severe warning.

For some obviously unsuitable and rushed projects, we must investigate whether there are illegal acts of corrupt collusion behind them. Of course, we do not need to go after all government-supported projects that are later abandoned. Instead, the key is to see whether the local government has fulfilled the necessary due diligence responsibilities, whether it has followed scientific and democratic decision-making procedures, whether it is in line with local industry, and whether the plans respect the basic rules of the sector.

The relevant government departments must promptly introduce supporting measures to regulate market order, based on the policies to promote the high-quality development of the chip and software industry previously issued by the State Council, China’s cabinet. Those policies have provided great support to this important industry in terms of finance and taxation, investment and financing, research and development, imports and exports, talent and skills, intellectual property rights, market applications and international cooperation.

At the same time, there is an urgent need to guide local governments and enterprises to respect the logic of business. The chip industry has its own unique development path, rooted in basic science. It needs a free academic atmosphere to stimulate scientists’ imaginations. We must cultivate the relevant talent and use them to their fullest. This cannot be achieved solely by spending more money. On the technical side, we must completely abandon the political engineer’s way of thinking, which emphasizes short-term gains.

Industrial policy is not a matter of choosing whether to preserve or to abolish. It’s about transformation — shifting from a selective policy basis to a more functional one. The former means extensive government intervention at the microeconomic level, selecting “winners” and distorts prices. The latter focuses on perfecting the market system, improving the business environment, maintaining fair competition, supporting the innovation and spread of industrial technology, and establishing a systematic and effective public service system.

This transformation has made significant progress since the 18th National Congress in 2012. However, certain technology sanctions that have emerged during the Sino-U.S. trade war have complicated the situation. Some people mistakenly think that “concentrating strength to do big things” implies an insistence on selective industrial policy. In fact, the more we build an innovative country and explore the frontiers of science and technology, the more we need to let the market play a decisive role in resource allocation.

We must target the chip bubble, but more importantly, we must crack down on the policy bubbles in which local governments overly interfere with the market. In recent decades, the Chinese government has paid significant attention to the chip industry and made huge investments when necessary. Now, with the sector’s development at a critical point, we should calmly reflect on our actions, particularly to clarify the context of industrial policies. We must supplement this with competition, innovation, talent and other policies.