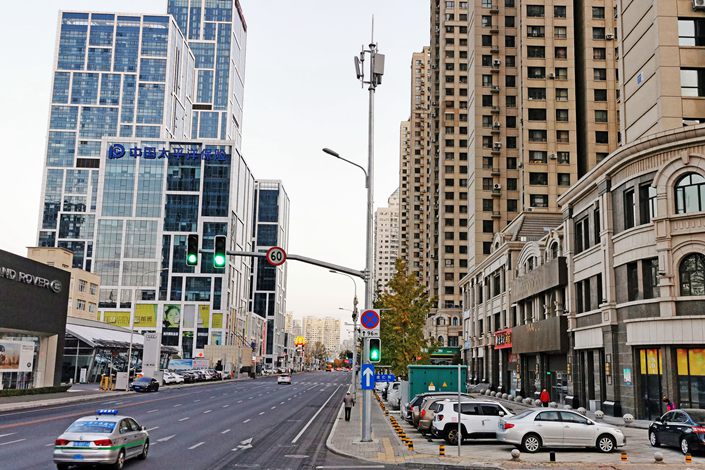 A satellite base station equipped with 5G stands at a street intersection on Oct. 29 in Dalian, Northeast China’s Liaoning province.

Following the government’s call for the rapid development of the self-driving car industry in the next few years, companies are aggressively rolling out the satellite base stations needed for such cars to stay on the road.

This kind of speed is just what the government seems to be after. In February, the authorities said China should be mass producing autonomous vehicles by 2025.

However, in a scenario that has been repeatedly played out when the government encourages an industry’s growth, the specter of excessive capacity and wasteful construction is looming due to uncoordinated development.

To solve this problem, base stations can measure and correct positioning errors within a certain radius, ensuring driverless cars stay on the right route.

Qianxun is now a major player in this field with 2,800 domestic base stations and another 120 abroad, Caixin has learned. The Shanghai-based company said it will continue to expand its network, without offering further details.

Another leader in the field is Navinfo Co. Ltd., which provides positioning services to clients including Germany’s Daimler AG and Audi AG. In 2018, it set up Sixents Technology, which specializes in high precision positioning networks. The following year, the newly-formed company received investments from the state-owned China Telecom Corp. Ltd. and internet giant Tencent Holdings Ltd.

As of October, it had built 1,900 base stations, covering most highways in central and western parts of China, said Sixents’ Vice President Wang Ping, adding that the figure will rise to 2,000 by year-end.

China Mobile muscled in on the crowded field this year, rolling out its 4,400 base stations in less than four months, said Yu Chengzhi, a China Mobile departmental vice president. That is an eye-popping pace, with one leading manufacturer of base stations for the mapping industry telling Caixin its annual capacity only amounts to about 1,000.

China now has more base stations than the U.S. Data from National Geomatics Center of China show the country had more than 10,000 satellite positioning base stations as of August, with another 12,000 under construction, while the National Geodetic Survey (NGS) says the U.S. has 2,200.

In part, China’s high figure is due to the desire of companies to each operate their own network, rather than collaborating with others or sharing data.

Most companies target their services at vehicles, so their stations are built along roads, said Gong Jiaqin, founder of a company that develops agricultural drones for spraying pesticides.

“We used to work with a service provider for this kind of positioning product, but it cannot meet our demand,” Gong said. “At that moment we realized we need to have our own.”

China Southern Power Grid, one of the country’s two grid operators, made the same choice. To monitor its infrastructure in remote areas, it aims to build about 800 base stations this year.

However many companies are actually offering similar services and competing for the same market. For example, Qianxun and Sixents — with about 5,000 base stations between them, more than double the U.S. total — are both devoted to driverless vehicles.

“Having a satellite station network covering the whole nation gives the operator a great premium,” said an industry person.

A government-led coordination mechanism is needed to help developers share base stations with each other, said Jiang, and the authorities need to “reasonably” control the number of stations in the country.

In the U.S., all base station operators share data with the NGS, which then makes it publicly available free of charge.

Wang Ruiyao, a director at China’s Ministry of Natural Resources, said at an industry conference on Oct. 22 that guidelines to manage satellite base station construction are being drafted. They will aim to promote the healthy development of station construction and positioning services under the premise of ensuring China’s geographic information security, Wang said.