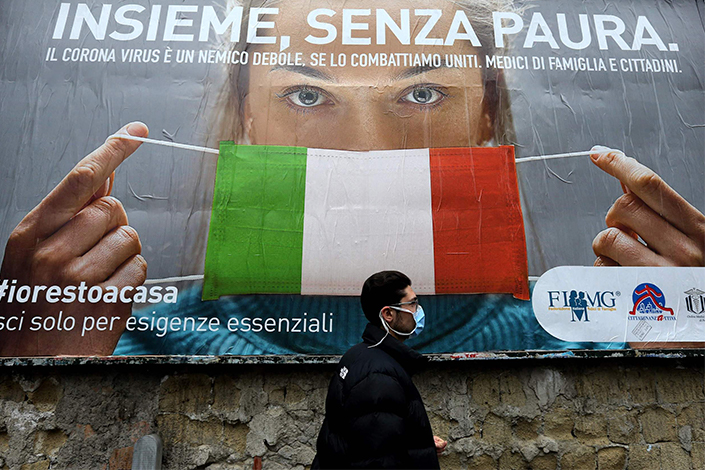 A man walks past a poster that reminds people to wear face masks in Naples, Italy, on March 22.

A top microbiologist in Hong Kong, who helped discover the coronavirus that causes severe acute respiratory syndrome (SARS) in 2003, has disputed research by Italian scientists suggesting that the new coronavirus was circulating in the country months before it broke out in China last December.

Yuen Kwok-yung, chair of infectious disease at the Department of Microbiology of the University of Hong Kong, told a forum on Nov. 20 that without sufficient evidence, research suggesting that the Covid-19 pandemic originated in Italy was inconclusive.

In a paper published in November by Tumori Journal, a peer-reviewed Italian medical journal of cancer science, more than a dozen Italian scientists said they had detected a certain type of novel coronavirus antibody in 111 individuals enrolled in a lung cancer screening trial that involved 959 asymptomatic volunteers. The trial was conducted between September 2019 and March 2020.

The Italian researchers found receptor-binding domain (RBD) specific antibodies as early as September 2019 in about 14% of the volunteers’ blood samples, the paper said. More than 30% were found in a cluster of positive cases in early February. The majority of the antibodies — 53.2% — were found in Lombardy, the part of Italy hit hardest by Covid-19.

“This is the main finding: people with no symptoms not only were positive after the serological tests but also had antibodies able to kill the virus,” Giovanni Apolone, a co-author of the study, told Reuters.

The scientists therefore suggested that the new coronavirus was circulating in Italy several months before the December outbreak in the city of Wuhan in Central China’s Hubei province. ”Finding SARS-CoV-2 antibodies in asymptomatic people before the Covid-19 outbreak in Italy may reshape the history of pandemic,” the paper said.

“It means that the new coronavirus can circulate among the population for a long time and with a low rate of lethality, not because it is disappearing, only to surge again,” he said.

To reach a definitive conclusion, Yuen said that his fellow scientists in Italy should instead test the type of neutralizing antibodies and also need to prove that those antibodies could kill the new coronavirus in lab. “Otherwise, there could be false positives of [coronavirus] antibodies,” he said.

The World Health Organization said it would contact the paper’s authors “to discuss and arrange for further analyses of available samples and verification of the neutralization results,” Reuters reported.

The frequent emergence of imported risks through the cold chain have prompted Chinese health officials and state media to revisit the suspected source of outbreaks in Wuhan and Beijing — which they claimed could also be brought in by contaminated frozen food.

Wu Zunyou, chief epidemiologist at China’s Center of Disease Prevention and Control, noted in an interview with the Beijing News published on Nov. 10 that in the early days of the Wuhan outbreak, many patients from the Huanan Seafood Market — the epicenter of China’s epidemic — worked in the frozen seafood section.

“Those clues all point to cold chain logistics that involved imported seafood — which could be the origin of the outbreak,” Wu said.