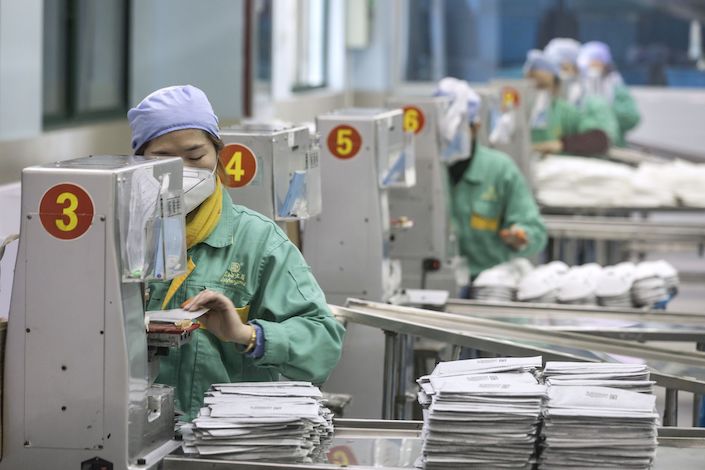 Employees work on the assembly line to make protective masks at a factory operated by Dasheng Health Products Manufacturing Co. in Shanghai

(Bloomberg) — China revised down its official GDP growth rate for 2019 to 6% from 6.1%, mainly due to a lower estimate for manufacturing output, a change that will make it slightly easier for officials to report economic expansion this year.

Gross domestic product in 2019 was smaller by 435 billion yuan ($67 billion) than the initial estimate released in January, China’s statistics bureau said Wednesday. That amount is roughly equal to the GDP of Ghana last year, based on World Bank figures.

According to the latest estimate, China’s nominal GDP was 98.7 trillion yuan in 2019. The manufacturing sector recorded the largest change — with value-added output reduced by 503.8 billion yuan from an earlier estimate — followed by the finance, transportation and construction sectors.

China often makes small revisions to GDP data based on factors such as the collection of more comprehensive information from businesses. In January Beijing revised up the annual growth rates between 2014 and 2018. In 2019, it revised the estimated growth of 2017 GDP downward by 0.1 of a percentage point to 6.8%.

Beijing didn’t publish a GDP growth target in 2020 for the first time in decades as it struggled with the impact of the coronavirus pandemic. Since then it’s largely controlled the spread of the virus, with business activity mostly returning to normal. As a result, China is the only major economy that’s expected to grow this year, though at a slower rate of around 2%, according to economists’ forecasts.