In Depth: Tesla Powers On as Rival Electric-Vehicle Makers Scramble to Compete in China

By An Limin and Flynn Murphy 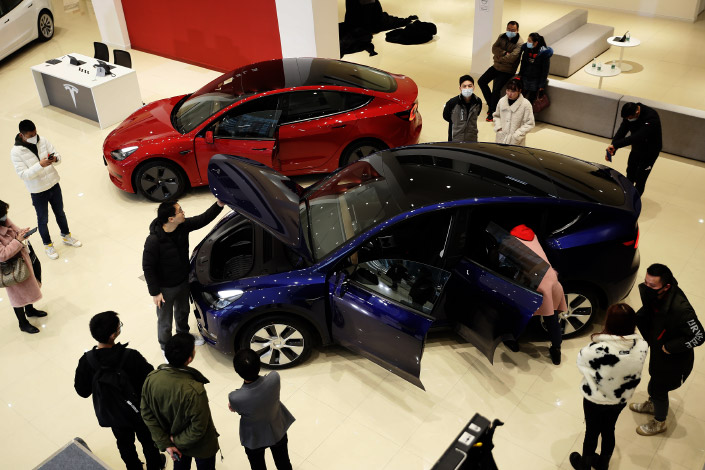 Prospective car buyers gather around a Tesla Model Y on Tuesday at a showroom in Southwest China’s Chongqing municipality.

On New Year’s Day, Tesla Inc. lobbed a bomb into China’s electric vehicle (EV) market with the sudden announcement that it was dropping the price of its new Shanghai-made Model Y cars by 30%. The new starting price of 339,900 yuan ($52,550) was around 100,000 yuan less than the presale price announced in August.

Officials and experts are divided about what impact the U.S. brand, which has become synonymous with new-energy vehicles (NEV) worldwide, is actually having on competition in China.

While some, such as former Chinese industry minister Miao Wei, have sought to portray Tesla’s position in the China market as a powerful incentive for domestic firms, some analysts are less upbeat, pointing out that domestic players, despite their impressive valuations, lack the competitive technology and smarts of the U.S. leader.

Tesla sold 114,000 of its earlier domestic Model 3 cars in the first 11 months of 2020, according to the China Passenger Car Association. That was far more than its nearest Chinese competitors.

The market also helped Tesla come within a whisker of its 2020 target of selling half a million cars: it missed the milestone by 450 cars, the company said.

It has propelled Tesla’s share price ever higher – it closed at $816.04 per share last Thursday, giving the company a market value of more than $770 billion and propelling CEO Elon Musk into the position of the world’s richest individual, a crown he took from Amazon.com Inc. founder Jeff Bezos.

It has had a disruptive impact on the whole supply chain, buoying companies that are vital to the firm’s dramatic growth. The market value of electric car battery-maker Contemporary Amperex Technology Co. Ltd. (CATL) is now close to 950 billion yuan, eclipsing even state oil and gas behemoth PetroChina Co. Ltd.

It’s also impacting the price of raw materials, like lithium, which hit a near historic low in China the middle of last year, but soared to 59,000 yuan per ton on Monday, up nearly 50% from August.

But Chinese branded vehicles hold about a tenth of the global EV market, and have little influence outside China, according to a landmark report released last month by UBS Securities. Even in China, more than three-fifths of passenger cars sold are foreign brands. The report nevertheless predicts a bright future for Chinese EV firms, saying they should hold nearly half of the global market by 2030.

Elon Musk also has said he believes Tesla’s most powerful competitor will come from China, telling German media as much in an interview last month.

Tesla’s prospects in the Chinese market were buoyed in 2018 when the government announced it would lift restrictions on the foreign shareholding of NEV firms, allowing foreign investors to build wholly owned factories.

The firm got to work on its Shanghai Gigafactory in Jan. 2019 and it was operational within a year. It began delivering domestic Model 3 cars on Jan. 7 last year.

The timing was precipitous. Authorities were taking great pains to wean the domestic EV industry, which had become bloated on the back of generous top level and local government subsidies that had contributed to making the country the world’s largest EV market by 2015. It also meant many Chinese EVs were designed to hit subsidy targets, and were sold to the commercial market.

But China has pared back these subsidies in stages since 2017, with some experts estimating that by June of 2019 they had dropped as much as 80% across the board. Chinese NEV sales also began a decline in mid-2019, and cumulative sales that year shrunk annually for the first time.

Tesla’s sales in China, however, have barely been affected, not even by the epidemic that nearly shut down the Chinese auto market at the beginning of last year. In March, monthly sales of Tesla’s Model 3 in China eclipsed 10,000 for the first time.

Tesla has made Chinese NEV-makers nervous. Sources in the industry, who Caixin granted anonymity because they were criticizing government policy, grumbled that subsidies had been withdrawn too quickly and that Tesla was given full cry too early, allowing the firm to reap the benefits of the shakeup.

In April, China’s Ministry of Finance set a new subsidy threshold: electric vehicles with a price tag of more than 300,000 yuan would no longer be subsidized. At the time, Tesla's price was above the cap. Tesla flexed its muscle and responded with a price cut.

By November, Tesla’s Model 3 sales had exceeded 20,000 a month in China. The only competitor in terms of units sold was the Wuling Hongguang MINI EV, a miniature electric car that competes for a different market segment with a starting price of 28,000 yuan.

The new Model Y will only grow Tesla’s competitive advantage in China. It uses about 70% of the same parts as the Model 3 cars which, according to Guosen Securities Co. Ltd., contributes to an estimated manufacturing cost of 237,930 yuan, and a gross profit margin of 30% per vehicle. Guosen predicts Tesla could eventually cut the price to 260,000 yuan in the Chinese market.

Meanwhile, traditional European luxury brands lack the flexibility to be able to pose much of a threat.

Mercedes-Benz has launched a pure electric SUV model, the EQC, which starts at 499,800 yuan in China. And BMW launched the pure electric iX3 in China, starting at around 469,900 yuan.

Mercedes-Benz and BMW are also trying to launch smaller electric cars, the former though a joint venture with Zhejiang Geely Holding Group Co. Ltd., and the latter through a tie-up with Great Wall Motor Co. Ltd.

But traditional automakers have been beset by issues, including the lack of software prowess and the constraint of effectively launching more expensive electric models on the same platforms as their fossil fuel counterparts, but often at a cost of tens of thousands of yuan more.

The day after Tesla’s dramatic New Year’s Day price cut, Yu Liguo, the president of ARCFOX, an EV unit of BAIC Motor Corp., said Telsa’s advantages could not be matched by Chinese manufacturers in the near term. He gave its low-cost autonomous driving capabilities as an example, but said the Chinese would catch up eventually.

Yu’s own firm has tied up with Huawei Technologies Co. Ltd. and will adopt its full set of software and hardware solutions for new models. These represent for the embattled Chinese tech company an attempt to push off in new directions after U.S. sanctions scuttled its smartphone business by cutting off its supply of high-tech microchips.

Meanwhile, Nio announced the launch of a new used-car platform, where second-hand Nio-branded cars can be bought and refurbished by the firm for resale.

The transformation efforts of traditional Chinese auto companies, which have always struggled to compete with global automakers, have now overtaken their new sub-brands and big wagers on EV tech, according to UBS Securities.

Former Chinese industry minister Miao Wei recently told Caixin that Tesla’s entry into China helped shore up the local EV industry, with the firm acting as a "catfish" rather than a "shark." Ouyang Minggao, president of the China EV100 Association, believes the brand’s presence in China has helped dispel skepticism about electric vehicle technology among consumers.

Industry insiders say whether that plays out, or whether Tesla continues to dominate the domestic EV market, should soon come into view.