In Depth: Huawei and Tencent Aren’t Playing Around Over Mobile Gaming Revenue 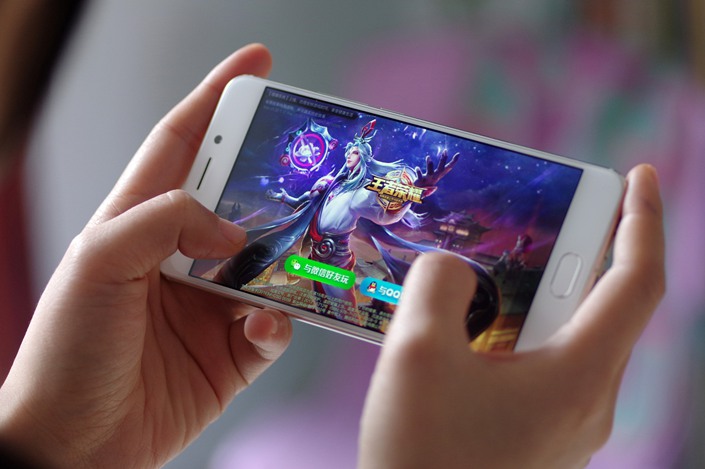 Analysts have linked the companies' quick compromise to China’s high-level crackdown on monopolistic behavior in the internet sector.

About an hour after the clock struck midnight to usher in 2021, Huawei Technologies Co. Ltd. dropped a bombshell.

The firm announced it had suspended cooperation with Tencent Holdings Ltd. on mobile game, and would for the time being remove all the firm’s gaming offerings from its app — even smash hit “Honor of Kings.”

The firm said Tencent had one day earlier unilaterally changed the nature of the two firms’ relationship. Huawei did not agree with the changes, forcing it to “halt cooperation.”

The power move looked certain to cement a new conflict between the tech giants and sparked uproar in the gaming industry.

The New Year’s drama was no surprise to those in the know. “Tencent and Huawei fought in the third quarter of 2020, and were supposed to sign a new contract in November,” one game industry source told Caixin.

The real surprise was that it was over almost as quickly as it began. By 8 p.m. on Jan. 1, Tencent had announced that after amicable negotiations, its games had been returned to Huawei’s app store.

Behind the tension is a push by game companies to reduce the revenue share taken by Chinese Android phone manufacturers, who also distribute software on the devices. In China, previous agreements between those who make the games — in this case, Tencent — and smartphone-makers like Huawei have seen the latter win half of the revenue generated by game sales on the app stores they run.

“Tencent met with Chinese smartphone manufacturers, trying to convince them to lower their commissions to 30%, the same as Apple. Other manufacturers were on board, but Huawei declined the offer, insisting on a 50% rate,” a source with knowledge of Tencent’s negotiations told Caixin.

What exactly happened on New Year’s Day depends on who you believe. A Huawei-linked source said the firm actually decided to accept a decreased commission of 30%, but Tencent sought to change other terms of their contract, including shortening its period to make it easier for the firm to withdraw. They said Tencent did not bring up this requirement until the evening of Dec. 31, leaving little time for negotiation, and causing Huawei’s legal department to scotch it.

Either way, the two have agreed to maintain their 50-50 revenue split for the time being while they continue to negotiate, Caixin understands.

What was remarkable was the willingness of both giants to play ball. Tencent is the largest developer and publisher of games in China, occupying around 60% of the country’s gaming market. Huawei, on the other hand, is China’s largest — and the world’s second largest — smartphone manufacturer, occupying over 40% of the Chinese market. They each have a market share twice that of their second-ranked competitor.

Analysts have linked the quick compromise to China’s high-level crackdown on monopolistic behavior in the internet sector. A Caixin’s investigation found a temporary truce exists between the two companies, which intend to keep negotiating, but also to avoid the conflict spilling over into public view. At stake is annual mobile game sales revenue exceeding 10 billion yuan ($1.5 billion). Neither side is particularly willing to give up even a small slice of that pie.

In September 2020, Chinese game company Mihoyo Co. Ltd. announced that the open beta version of its game “Genshin Impact” would not be available in the app stores of either Huawei or its smartphone rival Xiaomi Corp. Shanghai Lilith Technology Corp., known as Lilith Games, went further for the open beta of its game “Rise of Kingdoms,” snubbing all of China’s biggest smartphone makers — Huawei, Xiaomi, Vivo and Oppo, as well as Tencent’s YingYongBao and 360 Mobile Assistant. The game was made available on just four platforms — Lilith’s own website, the Apple Store, TapTap, and local gaming platform 9Game.

“Genshin Impact” and “Rise of Kingdoms” nonetheless found global success. The official “Genshin Impact” website received over 8.28 million pre-orders for the open beta release, according to Lilith. The firm took 100%.

“Publishing channels are diversifying and high-quality content can attract traffic quite easily nowadays. This means that content creators enjoy a wider range of options and have a bigger say. Top-notch game companies are very likely to lead the reform of China’s mobile game revenue-sharing model,” Minsheng Securities Co. Ltd. said in a research report.

A publisher at one game company told Caixin that when the mobile web was still in its infancy, large gaming firms had not yet switched their attention to mobile. Due to the limited supply of mobile games, game companies were able to split sales revenue with Chinese Android phone manufacturers 70-30, just as they did with Apple. Caixin granted the publisher anonymity so they could speak candidly.

“The more smartphone manufacturers and other publishing channels take, the less goes into the pocket of game companies. Then game companies’ operations departments throw money at traffic acquisition to boost operating revenue, which is one of their key performance indicators (KPIs). Focusing on revenue, they only squeeze the profit margin more tightly,” said the aforementioned publisher.

Times have been tough for the national champion. Statistics from International Data Corp. revealed that in the third quarter of 2020, Huawei’s smartphone shipment volume in China was 35.1 million sets, accounting for 41.4% of the national smartphone market. That was far more than second-ranked player Vivo’s 17.8%. In China’s 5G smartphone market, Huawei’s share was a whopping 56.6%, and it also had more high-end users than all other smartphone manufacturers combined.

Huawei targets users aged 15 to over 50, including many high-end users in their 40s or 50s. “If game companies can gain marketing support from Huawei and tap its high-end user base, they can make a decent profit — or at least avoid losses — even if their games are not that good. They cannot necessarily make a profit in other publishing channels,” said the aforementioned mobile game publisher.

Three rounds of U.S. sanctions left Huawei lowering smartphone shipment from the second half of 2020, and slowing or even stopping the production of multiple popular models, including Mate 30, as its supply of chips has been strangled. This has led to a severe supply shortage in some low-tier cities. Huawei’s third-quarter smartphone sales volume in 2020 was 15.5% lower than in the previous year. In November, it announced that it would sell its entire subsidiary brand Honor, a smartphone company that operates primarily online. Market research institute TrendForce Corp. predicted that the sale of Honor would move Huawei down to seventh place in the world’s smartphone market in 2021. If so, it will have little chance of regaining pole position.

With a decline in hardware sales revenue, Huawei is placing more attention than ever on its revenue from software, including from advertising and in-app purchases.

Zhang says Tencent is wary of the consequences of disappearing from Huawei’s app store completely. Their vacancy might prompt mid-ranking game companies to invest more money in Huawei’s immensely influential publishing channel, and they might eat into some of Tencent’s market share.

Dropping Tencent would cause problems for Huawei as well. For one thing, users may turn elsewhere for their favorite games. But further, simply removing Tencent games from its app store would mean the direct loss of a large chunk of revenue that wasn’t really costing Huawei much time or effort to produce.

Gaming industry insiders recognize both Tencent and Huawei as absolute powerhouses among all the distribution channels. And that’s why so many have taken quiet enjoyment from the conflict. It also means app stores may find themselves relinquishing some of that share.