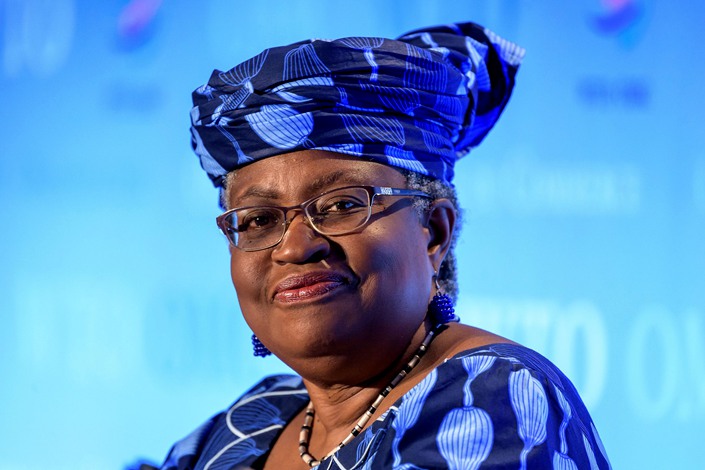 (Bloomberg) — The World Trade Organization selected Ngozi Okonjo-Iweala to be the first woman and first African as its leader, tasking the former Nigerian finance minister with restoring trust in a rules-based global trading system roiled by protectionism and the pandemic.

During a virtual meeting on Monday the WTO’s 164 members unanimously selected the 66-year-old development economist to serve a four-year term as director-general beginning March 1. She can seek to renew her term after it ends on Aug. 31, 2025.

After withstanding a veto of her candidacy by the now-departed Trump administration, Okonjo-Iweala takes the helm of the Geneva-based WTO at a precarious time for the world economy and just as the organization itself is mired in a state of dysfunction.

Okonjo-Iweala said she “absolutely” feels the pressure of her historic selection to lead the organization, so now “one really has to perform.”

Her first priority is to combat the Covid-19 pandemic by easing access to vaccines, she said, and eliminating restrictions to trade in medical goods and food. Speaking to reporters after her appointment, Okonjo-Iwealasaid it’s possible to expand access to vaccines in poorer countries by pursuing flexibilities in the WTO’s intellectual property rules.

She held a previous role as chair of the Global Alliance for Vaccines and Immunization after a public sector career in international finance, including two terms as Nigeria’s finance minister and some 25 years at the World Bank. Her dual U.S. citizenship means she’s also the first American to hold the organization’s top job.

Navigating the growing chasm between China and Western nations — which argue that China’s entry into the organization in 2001 failed to transform it into a market economy — will be a key challenge.

The U.S. delegation to the WTO said it is “committed to working closely with Director General Okonjo-Iweala and she can count on the United States to be a constructive partner,” according to a statement released in Geneva. “Dr. Okonjo-Iweala has promised that under her leadership it will not be business as usual for the WTO, and we are excited and confident that she has the skills necessary to make good on this promise.”

China’s delegation to the WTO, in a statement, said “the WTO is at its critical moment and must be able to deliver soon. The collective decision made by the entire membership demonstrates a vote of trust not only in Dr. Ngozi herself, but also in our vision, our expectation and the multilateral trading system that we all believe and preserve.”

Washington and Brussels have railed against China’s massive subsidy programs, forced technology transfers and the state’s expansive influence over the Chinese economy — policies that they say have collectively resulted in trade distortions that negatively affect the global economy.

During her campaign, Okonjo-Iweala acknowledged the necessity of rebuilding trust between the U.S. and China while trying to find areas of common interest. As a candidate she endorsed an ongoing an initiative among the U.S., EU and Japan aimed at developing new disciplines for industrial subsidies, state-owned enterprises and forced technology transfers.

In the near term, Okonjo-Iweala may look for some early wins on issues including:

A multilateral accord to curb harmful fishing subsidies

Moderating talks to address the paralysis of the WTO appellate body, the forum for settling international trade disagreements

This week the European Union is expected to call upon U.S. President Joe Biden to consider a set of principals as a basis for negotiating and clarifying the WTO’s dispute settlement rules.