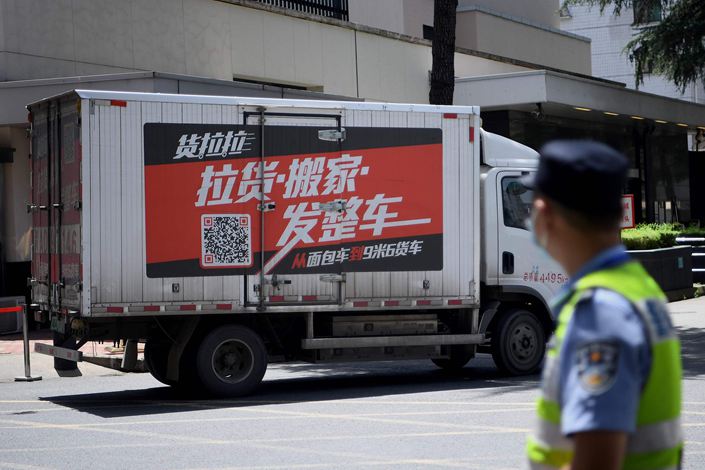 Lalamove, known as Huolala in Chinese, came under the spotlight after a 23-year-old woman died after apparently jumping out of a van she hired from the company. Photo: VCG

The Hong Kong-based logistics startup, Lalamove, which is backed by investors including smartphone-maker Xiaomi Corp., has apologized for the death of a woman who is said to have jumped out of a van she hired from the company while it was moving.

Lalamove, known as Huolala in Chinese, posted an apology on social media (link in Chinese) on Wednesday — 18 days after the death — saying that the platform “bears inescapable responsibility for the incident.” It also proposed a plan to improve user safety and driver screening.

The company came under the spotlight after a 23-year-old woman, surnamed Che, died after apparently jumping out of a Lalamove van she hired. A police investigation of the incident is underway. The 38-year-old driver was arrested on suspicion of negligence causing death, the Hunan government said Tuesday.

The tragedy attracted public attention after an online post published by the victim’s family went viral over the weekend. According to the article, Che “jumped from the window” of the front passenger seat while the van was moving and was hit by passing traffic on the evening of Feb. 6. Che later died in a hospital. She hired the van from Lalamove’s ride-hailing platform, according to Che’s family members.

Che’s family members said police found that she jumped out of the vehicle “by herself” after the driver veered off the route recommended by the app. Documents shown to Che’s family by police indicated that the van didn’t follow the commonly used route.

Lalamove confirmed the woman’s death Sunday in a statement and said the company held talks with Che’s family on follow-up arrangements. Lalamove said police have yet to reach a conclusion and pledged to assist in the investigation. The police department didn’t publish details about the case.

Lalamove said in the Wednesday apology that the platform lacks safety alerts and failed to notice the incident in a timely manner. It said that problems exist in terms of in-ride recording. Lalamove said it will improve its safety functions including in-car audio recording, route sharing, emergency contacts and police reporting, features which are common among China’s ride-hailing services.

Lalamove also pledged to raise the standards of its drivers by improving its screening mechanism and strengthening cooperation with the police to expand data sources for reference.

The company has not suspended services.

Established in 2013, Lalamove is the largest platform that connects intra-city cargo delivery service providers and users. The company raised more than $900 million with backing from investors including smartphone-maker Xiaomi and Sequoia Capital China. The latest fundraising round of $515 million was completed in December.

At the end of November, the company operated in 352 Chinese mainland cities with 7.2 million monthly active users and 480,000 monthly active drivers on its platform.

The incident reignited public concerns over the safety of ride-hailing services. In 2018, Didi Chuxing, China’s top ride-sharing app, suspended its inter-city carpooling service following two murders of female passengers by platform drivers. Didi has since launched a series of business shakeups and introduced safety measures including allowing passengers to contact the police directly via its app and making in-trip audio recordings compulsory before it resumed the carpooling service in late 2019.

“If the investigation concludes that Che’s jump was caused by the driver’s attempt to harass, the incident will be similar to the Didi cases,” said Zhang Dezhi, a lawyer at Beijing Fadian Hangjian Law Firm. If that is the case, the platform will be held accountable, Zhang said.

In August 2018, a Lalamove user complained she was insulted and threatened by a driver she hired on the platform. Lalamove dropped the driver and paid compensation to the user. In November that year, two clients were injured in a traffic incident. A court ordered Lalamove to pay compensation as the driver lacked the necessary licenses to provide the service.