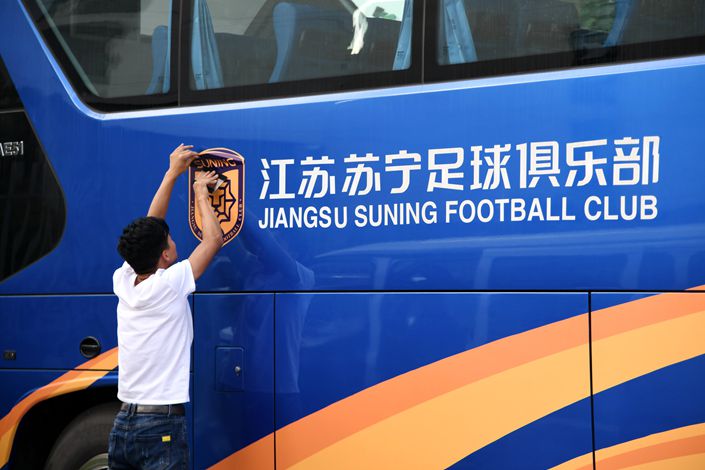 The club said Sunday it would “cease operations” without giving further details, just as Suning.com Co. Ltd. announced a $2.3 billion state-led bailout that will hand over nearly a quarter of the company to financing vehicles controlled by the government of the Guangdong province metropolis of Shenzhen.

Suning.com’s billionaire founder Zhang Jindong, who once spoke of his firm nurturing the hometown team as a first class Asian club, signaled a wind change at Suning’s annual conference in December where he plugged the debt-saddled firm’s renewed “focus on retail.”

Both Suning.com and Jiangsu FC are based in Nanjing, capital of East China’s wealthy Jiangsu province.

The news has raised questions about whether Suning.com could pawn some of its other prize assets as it tries to raise cash — including its 70% stake in Italian soccer club Inter Milan, which it bought for more than 270 million euros ($326 million) in 2016.

Founded three decades ago, Suning.com grew into one of China’s biggest retailers with a network of stores catering to the country’s growing demand for consumer electronics as economic reforms reshaped the sector, but was itself supplanted by the e-commerce revolution in recent years. Despite an 11th hour effort at online retail which included a 2018 name change to “Suning.com,” the firm has only about a 5% share of China’s business-to-consumer e-commerce market, trailing leaders Alibaba Group Holding Ltd., JD.com Inc. and Pinduoduo Inc.

Besides Suning.com’s financial woes, also under the spotlight is the business of Chinese soccer, where clubs “basically can’t exist without being propped up by a commercial sponsor because there just isn’t enough money in it,” according to football writer Cameron Wilson, founding editor of the Wild East Football news site.

Wilson told Caixin that sponsors usually get involved to score “political brownie points and they were under no illusions that they would lose money from running football clubs.”

One Super League club manager estimated Jiangsu FC was spending between 700 million yuan ($108 million) and 1 billion yuan per season, with salaries and bonuses making up a sizable portion. In 2016, Suning.com spent 50 million euros to buy Brazilian player Alex Teixeira, setting a Super League record. The team were league champions for the first time in the 2020 season, defeating eight-time winners Guangzhou FC in the championship final.

But murmurs of wage theft have dogged the club, which was forced to deny reports last year that some players had planned to protest over unpaid salaries.

Teixeira let his contract with the club lapse at the end of last year, and is reportedly being courted by Saudi club Al Hilal. Meanwhile Romanian coach Cosmin Olăroiu was not expected to return for the 2021 season.

Wilson said the club’s end was “one of Chinese football’s darkest days.”

“It shows anyone considering supporting local clubs that it’s a waste of time to invest much emotion into it, because even if your club wins the league, it may suddenly disappear shortly afterwards,” he told Caixin.

He said without storied Chinese football clubs like Jiangsu FC the game would “remain in the doldrums indefinitely no matter how many pitches they build or academies they open or other such infrastructure projects. Football development starts at home.”

Wilson also said the statement, which trumpeted Suning’s support for the club over its five years of ownership and its achievements, before adding that Jiangsu FC could not guarantee its continued involvement in the Chinese league or Asia’s AFC Champion’s League, was tone deaf.

“This kind of attitude — shameless self-promotion at the same time as announcing you are killing a football club — is a classic example of business involvement in football totally self-serving and not caring about the supporters and impact on the local footballing community whatsoever,” Wilson said.

Jiangsu FC said it was seeking new backers. The Chinese Football Association said it had contacted the club and was paying close attention to the matter in a statement released Monday. It said it regrets — but would respect — the club’s decision.

“Jiangsu FC has a good history of development,” the association said. “After Suning Group (began) operating Jiangsu FC in 2015, it has made energetic efforts to develop football. The Chinese Football Association would like to express its gratitude!”

After the founding of the modern team in 1994 when China’s professional league began, Jiangsu FC spent most of its first decade in the competition’s second tier, before entering the top tier in 2008. The club’s women’s team won the Chinese Women’s Super League in 1999.

PPLive said in an Aug. 26 letter that it would break the agreement, and the league in its filing said there was no legal basis for the broadcaster to do so. The league has since signed a less lucrative deal with Tencent Holdings Ltd.