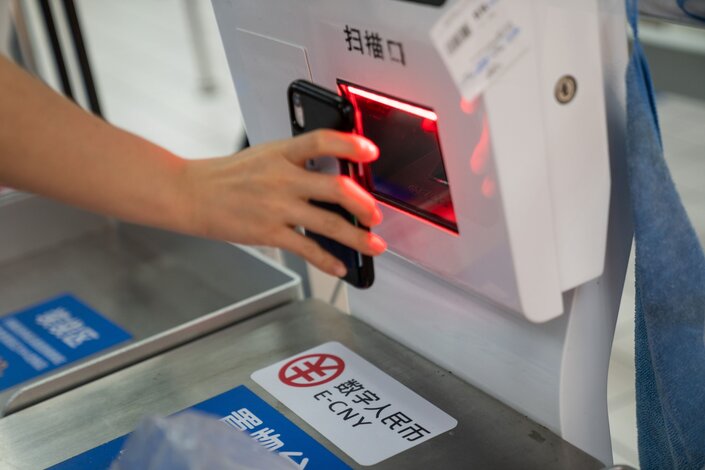 Signage for the digital yuan

(Bloomberg) — Trouble may be brewing in China for Bitcoin’s raucous and divisive rally as the nation pushes ahead with a world-leading effort to create a digital version of its currency.

That’s because the eventual rollout of the virtual yuan could roil cryptocurrency markets if Chinese officials tighten regulations at the same time, according to Phillip Gillespie, chief executive of crypto market maker and liquidity provider B2C2 Japan, which mainly works with institutional investors.

“Once a digital yuan is introduced, that’s going to be one of the biggest risks in crypto,” Gillespie, who previously worked in currency markets for Goldman Sachs Group Inc., said in an interview. “Panic selling” is possible if the new rules end up sucking liquidity from trading platforms for digital coins, he said.

Central banks’ power to issue virtual money and proscribe rivals is one of the key risks for the crypto sector. Chinese citizens are already banned from converting yuan to tokens but the practice continues under the table using Tether, a digital coin that claims a stable value pegged to the dollar. The money parked in Tether then gets routed to Bitcoin and other tokens.

Tokyo-based Gillespie sees potential for an outright ban on Tether, which could raise the stakes for anyone minded to continue using it.

A draft People’s Bank of China law setting the stage for a virtual yuan includes a provision prohibiting individuals and entities from making and selling tokens. In recent days, China’s Inner Mongolia banned the power-hungry practice of cryptocurrency mining.

Representatives of the People’s Bank of China didn’t reply to a fax seeking comment on the prospect of regulatory changes. While there’s no launch date yet, the PBOC is likely to be the first major central bank to issue a virtual currency after years of work on the project.

“Tether’s success has provided a blueprint for how a CBDC could work,” said Paolo Ardoino, chief technology officer for Tether and Bitfinex, an affiliated exchange. “Furthermore, CBDC’s are unlikely to be available on public blockchains such as Ethereum or Bitcoin. This last mile may be left to privately-issued stablecoins.”

Still, Gillespie points out that Tether is “this massive amount of fuel for Bitcoin purchases” and few people realize the potential for disruption. A “tremendous amount of liquidity” is coming from exchanges tapping Chinese demand, he added.

Bitcoin surged fivefold in the past year and hit a record above $58,000 last month before dropping back about $10,000. The rally has split opinion, with some arguing a new asset class is emerging and other seeing pure gambling by retail investors and speculative pros in the Wild West of finance.

Tether is an equally controversial token deep in the plumbing of the nascent cryptocurrency market. Traders use it to park money as they shift from virtual to fiat cash.

More than $18 billion of Tether moved overseas from East Asian addresses over a one-year period, including spikes suggesting Chinese origin, according to an August report from Chainalysis, which analyzes the blockchain network technology underlying tokens. The report indicated citizens may be using Tether to dodge rules that limit capital transfers abroad.

Questions about Tether continue to swirl. The companies behind it were banned from doing business in New York last month as part of a settlement with state officials who found that they hid losses and lied about reserves.

A recent report from JPMorgan Chase & Co. said there’d likely be “a severe liquidity shock to the broader cryptocurrency market” if issues arose that affected the “willingness or ability of both domestic and foreign investors to use Tether.”

“All the volume goes through Tether,” said Todd Morakis, co-founder of digital-finance product and service provider JST Capital. “As regulators become more and more restrictive on stablecoins, that could be very negative for the market because that could mean less liquidity.”

B2C2 Japan’s Gillespie said Tether is “such a risky asset” and a “massive liquidity shock” is possible if China does ban it. “What would happen is there’s going to be massive panic selling,” he said.