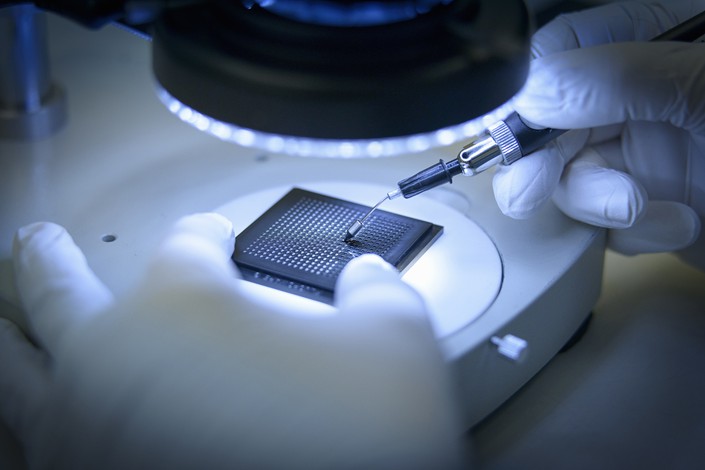 Since the start of this year CICIIF has either sold down stakes or announced its intent to do so in several listed firms as the first fund winds down. Photo: VCG

A national entity set up to invest in China’s chip sector is starting to unwind positions in some of its more advanced investments, cashing out positions and pocketing profits as a growing number of its portfolio companies list on the country’s nearly 2-year-old Nasdaq-style STAR Market.

Chinese government-led funds like the ones set up by CICIIF are similar to venture and private equity funds elsewhere, though they tend to be more policy-focused. Like their private counterparts, they raise money from outside contributors and invest it over a certain timeframe. They then sell off their investments after they mature and return the profits to original contributors to the fund.

According to separate announcements by the companies, both dated on Saturday, CICIIF reduced its holdings in GigaDevice by 4.72 million shares, while it sold off 1.89 million shares in China Wafer Level. Both companies said the stakes being sold amounted to about 1% of their shares. They noted that even after the sales, CICIIF would still be their second largest stakeholder with 6% or more of their stock.

Both companies previously announced CICIIF would sell its holdings of their stock equal to up to 2% of their total shares between February and August this year. Based on their latest market values and current exchange rates, 1% of GigaDevice’s shares is worth about $133 million, while 1% of China Wafer Level’s was worth $31 million.

The sales come as China is rushing to build up its own chipmaking sector, aiming to wean itself off foreign dependence for the sophisticated components that power most electrical devices. Beijing had already targeted the sector for priority when it first sent up CICIIF seven years ago. But the drive for more self-sufficiency has gained momentum in the last two years after former U.S. President Donald Trump’s administration took aggressive steps to block some of China’s biggest tech names from importing U.S. chips and chipmaking equipment.

The sales of GigaDevice and China Wafer Level shares are just the latest for CICIIF as it winds down the first of two major funds it has managed in its brief lifetime. That first fund was launched shortly after CICIIF’s founding in 2014 and had 138.7 billion yuan provided by big state-owned entities such as the China Development Bank Capital, as well as the country’s tobacco monopoly and China Mobile, the country’s dominant wireless carrier.

Since the start of this year CICIIF has either sold down stakes or announced its intent to do so in other listed firms as the first fund winds down. In addition to GigaDevice and China Wafer Level, other companies seeing their stakes wound down including Wuxi Taiji Industry Co. Ltd. (600667.SH), JCET Group Co. Ltd. (600584.SH) and Anji Microelectronics Technology (Shanghai) Co. Ltd. (688019.SS).

Most of those have recently listed on China’s Nasdaq-style STAR Market, which launched in 2019. Many of their shares sagged by 3% or more in Monday trade as reality of their being cut loose from direct Beijing support became more apparent.

The first fund finished investing its money by the end of 2018, with a focus on chip manufacturers, along with chip design and testing houses as well as manufacturers of chipmaking equipment. It disclosed plans to begin cashing out of some of its investments around the end of 2019, in common practice for such investment funds.