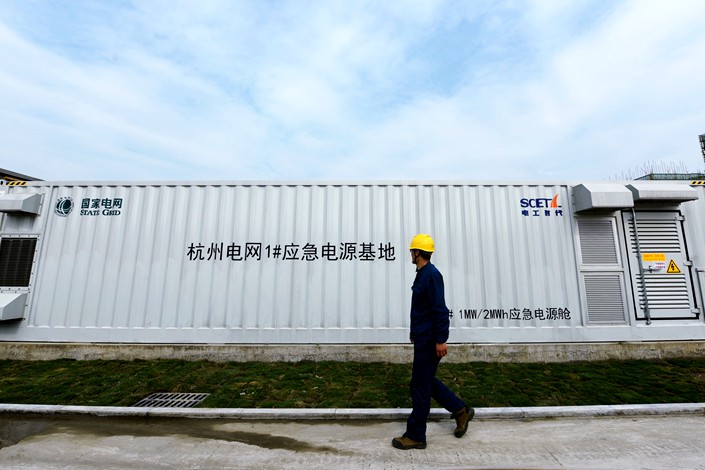 A member of State Grid staff looks at an energy storage facility in Hangzhou on April 7, 2021. Photo: IC Photo

With China ramping up its renewables capacity to fulfill Beijing’s carbon reduction pledges, the country’s power storage capacity from batteries is expected to increase tenfold by 2025, which could help defeat the daily feast-famine cycle in wind and solar power output.

Total battery capacity for power storage in China through 2025 is predicted to top 35.5 gigawatts (GW), up from 2020’s 3.27 GW in a conservative scenario, according to a report that industry group China Energy Storage Alliance released Wednesday. The forecasted figure could climb further to 55.9 GW if new wind and solar power installations increase significantly over the next five years.

Although this type of power storage accounted for less than one-tenth of the country’s overall capacity last year, it still nearly doubled in 2020, the report said. By comparison, the most common method for storing excess electricity output — pumped-storage hydroelectricity — grew by 5% last year.

Storage is an important issue for renewable power generators because the wind often blows and the sun often shines at times when electricity demand is low, leaving any excess electricity to go to waste unless stored. The world’s top solar-panel maker, China’s Longi Green Energy Technology Co. Ltd. (601012.SH), is looking to hydrogen to solve the problem, which the company says is a bottleneck to the large-scale development of solar power.

In China’s sunshine-rich western regions, some solar power arrays have had to let electricity go to waste due to their limited storage capacity. In 2019, Tibet lost nearly one-quarter of its solar-generated electricity, according to the National Energy Administration (NEA).

NEA Director Zhang Jianhua said in a press conference on March 30 that the country aims to improve its power storage capacity over the next five years.