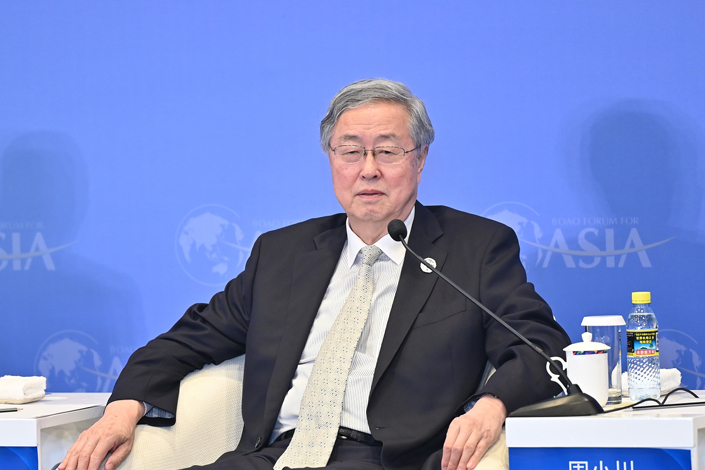 Editor’s note: This is the second installment of a commentary on China’s campaign to cut carbon emissions by the former governor of China’s central bank, Zhou Xiaochuan. In this piece, Zhou discusses the campaign’s risk and returns, and how to break the deadlock in global climate change talks. This commentary has edited for clarity and style, and the sub-heads have been added by editors. Read part 1 here:

How should we see the possible impact of carbon emission reductions on GDP, inflation and economic growth? If GDP is the “flow” and wealth is the “reserve,” how to understand their relationship with carbon neutrality?

Is the carbon campaign a boost to GDP or wealth?

In terms of the flow, there is an old Chinese saying: “Without discarding the old, there would be no coming of the new.” In other words, demand can be continually updated to maintain or increase GDP, similar to filling one’s wardrobe with new clothes whether one wears them or not — as the closet fills, GDP goes up.

In this sense, replacing usable coal power generation equipment with that for wind, photovoltaic or nuclear power may constitute a waste, but the increase in demand and potential renewable energy power supply will actually promote GDP growth. Europeans are always stressing this point. Even if the predictions are wrong and someday we find the greenhouse effect not so threatening, actions to reduce carbon emissions will still generate an increase in GDP. They will not have been in vain. Take buying clothes as an example. Even if we never wear our new clothes, we have still contributed to GDP growth. Still, this kind of GDP growth will generate waste rather than accumulating wealth.

Let’s consider another comparison. As we know, many migrant workers go to the cities to make money that they use to build houses in their hometowns. But, since they spend most of their time making money in urban areas, their rural homes may seldom be occupied. After another 10 years, they may even demolish the first house to build a newer one. This is a typical case of waste in place of accumulation. In contrast, Europe has many buildings whose history can be traced back one or even 200 years ago, if not earlier. And because they are still in use today, this is a situation of the accumulation of wealth. Some wealth even appreciates in value over time, such as works of art.

Therefore, even if the theory of climate change is somehow wrong, GDP growth can still be realized as we replace fossil fuels with wind and photovoltaic energy ahead of schedule — but there will be no wealth accumulation. This is the relationship between wealth and GDP. As I see it, the argument that carbon emissions reduction will entail a lot of waste is unbalanced. We can interpret the situation more precisely using two concepts from economics — flow and reserve. More importantly, wealth is difficult to measure. President Xi Jinping’s “Water and Mountains Theory” — that lucid waters and lush mountains are invaluable assets — takes the natural environment as a kind of wealth. Protecting that wealth with climate and environmental actions will more than compensate for any waste in the process like abandoned thermal power plants.

Actually, what is really difficult to measure is the progress of carbon emissions reduction and the point of equilibrium between the demand enabling GDP growth and the cost of emissions reduction. The cost of production and living will increase in the process of reducing emissions, which is likely to affect the competitiveness of output and thus the relationship between supply and demand; inflation may rise, signaling an economic recession. Speaking of competitiveness, if all the countries in the world could transform their energy structures at the same time, changes in relative competitiveness would be negligible. But if they are not so synchronized, it will generate all kinds of issues. This is why some people may argue for a carbon border tax according to carbon footprint measurements.

Can we contain risk?

In financial services, many businesses are essentially conducting risk management and control. When it comes to climate change, the biggest risks for the financial sector are poor investment decisions coming from inadequate attention to emissions reduction. An error in investment may turn an otherwise profitable project into an unprofitable one — or even worse, suspend or shut down a project already in progress due to price adjustments and changes in the way people think. We need to anticipate the significant risks that can be generated by climate change.

For example, if constructing a power plant, we need to be far-sighted, anticipating the quotas, prices and policies that will come with carbon emissions reduction in the next two or three decades and beyond. Even so, financial problems may arise. All I’ve mentioned so far is about risk control at the micro level.

There is risk control at the macro level. This involves GDP and wealth as well as economic efficiency and competitiveness. Macro risk control is based on a wide range of probability calculations evaluating the risk associated with whether climate change theory is correct or not. To handle such problems, we can use a kind of trade-off via the “Bayesian Decision Theory.” As we know, different events have different probabilities of occurrence, and the theory of climate change is no exception. Its reliability is as high as more than 90%, but there is also a small chance that climate change imposes no threat, and is a “false alarm.” From the initial development of climate change theory until now, a small group of scientists (both domestic and international) have vocalized their strong opposition.

Economists are in no position to judge whether the theory is right or wrong. But they may still act as “experts” in evaluating the respective probabilities of the theory being right or wrong, and then the total economic and social benefits or losses that accompany each climate response action. This is the basis on which we can make economic decisions and carry out risk management — the “Bayesian Decision Theory.” Of course, analysis and decision-making depend on a solid foundation of good data and measurements.

Can we have global action?

Global consensus is currently lacking in many areas.

When it comes to climate issues, developed and developing countries tend to be at odds with one another. President Xi Jinping has made solemn commitments to respond to climate change based on the concepts of a global village and a community with a shared future for mankind. Meanwhile, the U.S. has decided to rejoin the Paris Agreement, perhaps signaling a new phase in the debate over climate change.

Still, some specific controversies remain unresolved. Developing countries generally find that financial and technical support for carbon emissions reduction from their developed counterparts is far from adequate; then there is the problem of cross-border carbon emissions, which also involves carbon border taxes; there are even transnational carbon emissions such as with cross-border aircraft and ships.

We are now facing a need to regulate cross-border carbon emissions. Reaching a consensus on that fact is nothing compared to the problem of deciding who will be the beneficiary of any such taxes or charges. As our current international and multilateral systems are hardly able to handle the issue, conflicts are likely to escalate. Some have vividly compared it with territorial defense, where a likely break a deadlock is by going to war. Problems of this kind are hard enough to result in consensus, let alone joint action. Considering the power of the status quo, suspicion toward proposals to tackle climate change “together” is understandable. Under such circumstances, it is all the more important for us to sincerely uphold the purpose of a community with a shared future for mankind along with the ideal of multilateralism, taking the post-World War II Bretton Woods system as a point of reference to boldly design and vigorously promote joint action.

What kind of carbon market we want?

As I have discussed elsewhere, there are a number of issues involved in establishing a carbon market. For instance, there needs to be a designated target for total emissions, the market can be analyzed using general equilibrium theory with quotas, and so on.

Here I will focus on the functions of the carbon market. There is a theory that the main function of the carbon market is to regulate the supply-demand relationship in spot transactions — that is, those who emit a large volume of carbon should either “take some control measures” within the current period or purchase rights for their carbon emissions. But in fact, subject to current technological levels and equipment performance, the balance between supply and demand is constricted by a variety of rigid factors, which suggests that the fulfillment of some emissions reduction tasks is impossible in the current period or short term.

In my opinion, the most important function of the carbon market is to guide investments. By informing project and technology investments within a several-year span, the carbon market can play a significant role in shaping future patterns of production and consumption. To achieve peak carbon dioxide emissions by 2030 and carbon neutrality by 2060, many new investments are needed in carbon emissions reduction in the power generation and transportation industries as well as the development of new technologies.

So, how much investment is needed? The keynote report — Carbon Neutrality Economics: Macroscopic and Industry Analysis Within a New Framework of Constraints — published by CICC estimates China’s total green investment demand by 2060 to be around 139 trillion yuan ($21.2 trillion) in terms of today’s value. According to a March 2021 report from the International Renewable Energy Agency (IRENA), by 2050, renewable energy investments within global planning are expected to increase by 30% to reach $131 trillion. Therefore, taking account of the fact that China is responsible for about a third of current global carbon emissions as well as the current exchange rate, a simple calculation reveals that China’s corresponding investment should be approximately 283 trillion yuan.

Attracting so much investment is obviously an enormous and challenging matter; behind that are yet more difficult issues like how to effectively guide investment, set up incentive measures and avoid significant deficits. The investment won’t just come out of thin air or be realized in a windfall. Thus every investment needs to be based on guidance and calculation, and calculation should take signals from the carbon market. This will all depend on massive amounts of basic data and investment measurements involving carbon pricing and research and development venture capital. If projects don’t even have information on total carbon emissions or carbon pricing, it is really unappealing for investors.

At the same time, we will need to use the carbon market in order to assess the effectiveness of future technologies. Thus taking the carbon market as a mere spot market for striking a balance between supply and demand during the current period is a big mistake — the carbon market must be seen as a financial market whose primary function is to guide investments with a several-year span, including medium and long-term investments. Moreover, as Chinese authorities have always tended to look out for their individual areas of responsibility, it is worth noting which department is given the rights to construct and manage the carbon market. In short, the carbon market is an issue of green governance.

Finally, to reiterate some of my earlier comments: When it comes to carbon emissions reduction, time waits for no man; we need to take action and take it now. Nevertheless, further discussions should be based on a solid foundation of data.

This article is adapted from a speech delivered by the author at the Seminar on the Realization Path and Economic & Financial Influence of “Peaking Carbon Dioxide Emissions by 2030 and Achieving Carbon Neutrality by 2060.”