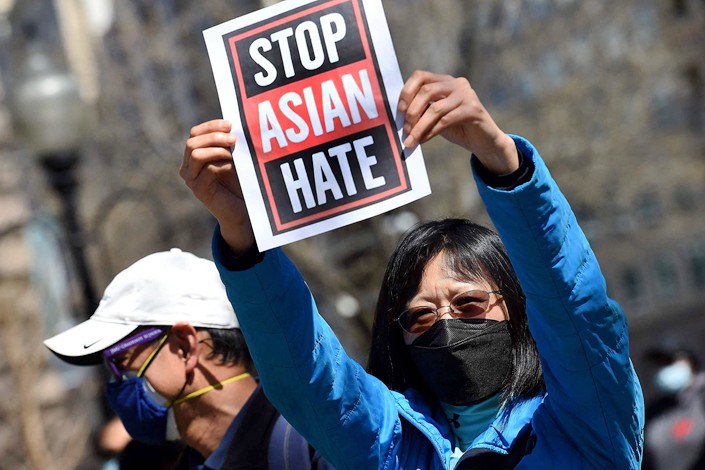 In January and March, the doors of Peter Chang’s two restaurants were smashed in the middle of night and the cash registers were taken. While little cash was lost, he had to spend $2,600 on repairs. Although four other Asian restaurants in the area were also burgled that night, Chang said he wasn’t sure if the incidents were hate crimes.

Chang is a celebrity chef and restaurateur based in the Washington, D.C. area. The 57-year-old Hubei province native came to the United States in 2001 on a two-year contract for the Chinese Embassy, where he had the chance to cook for the then Vice President Hu Jintao.

Now the owner of 10 restaurants, Chang is fearfully watching the rising tide of animosity toward Asians.

“Since last October, many of my peers in the Chinese restaurant industry have told me that they have had unfriendly experiences,” Chang told Caixin.

Since the start of the pandemic, there has been a rise in hate crimes directed at Asians, including the massacre of eight people in Atlanta in March, six of whom were of Asian descent.

Statistics from advocacy group Stop AAPI Hate show that nearly 3,800 anti-Asian hate incidents were reported from March 2020 to the end of February, significantly higher than the prior year’s count of about 2,600 hate incidents nationwide. The data shows that roughly 503 incidents took place in the first two months of 2021 alone.

A new study published in the American Journal of Public Health suggests that former President Donald Trump’s inflammatory rhetoric about the coronavirus, which he repeated called “China virus” on social media and on TV, helped spark anti-Asian sentiment. In a White House press briefing in March, President Joe Biden’s press secretary Jen Psaki said that damaging rhetoric from the prior administration led to “inaccurate, unfair” perceptions that threatened Asian Americans.

“We left home to come here because of this country’s civilization, progress, democracy and equality. If we are discriminated against, oppressed, bullied and treated without dignity, that is not the kind of society we want to be,” Chang said.

The Justice Department will also review how it can better crack down on violent acts against people of Asian descent in the country, including by prioritizing prosecution of those who commit hate crimes, according to U.S. media reports.

Chang participated in a rally in Washington on March 20, part of nationwide protests to condemn attacks against Asian Americans after the Atlanta massacre.

Chang said this was his first time attending a protest in his 20 years in the U.S. “As a chef who usually doesn’t want to be seen, I feel a deep anxiety: if I don’t speak up, I fear that the next big act of discrimination will happen to me or my company or my family,” Chang said. “I told my daughter: I’ve woken up.”

A week later, hundreds of members of the Asian American community and their supporters ran along parts of the Boston Marathon route as part of the #StopAsianHate movement. Xia Ming, board director of the New England Chinese American Alliance, the group behind the event, said that a few rallies are not enough to solve this problem.

As a Chinese American, he said that many in his community, including himself, often fail to do this. “I only speak up when it’s necessary, and even then, I often debate whether it’s appropriate to speak up.”

Asian Americans have been called “statistically negligible,” which is really sad, Chang said. Changing this situation calls for a strong voice from Asian Americans and for individuals like himself to wake up as soon as possible, he said.

Chang’s comments echo the testimony given to Congress on March 18 by Korean American actor and producer Daniel Dae Kim, who said he was told that Asians are “statistically insignificant” in polling models of U.S. elections.

Chang compared the situation today to the early 20th century, when Chinese writer Lu Xun tried to rouse the Chinese people during the post-World War I turmoil that sparked the anti-imperialist May 4th movement.

Chang quoted Lu’s writing, saying “if you don’t speak up to break the silence, you die with it.”

“The key is how to let everyone realize that we cannot be silenced. This is something that needs to be done step by step,” Chang said.

The first step is to help everyone learn about Asian American culture and history and eliminate misunderstandings through reforms to the education system, suggested Xia, who is deputy secretary general of the Chinese School Association in the United States.

“The impact of a rally is short-lived and may last a year or two, but the impact of education on changing a person’s mind is long-term,” Xia said.

A better era for change

Xia thinks it will be easier for Asian Americans to have their voices heard today, compared with previous decades. “Twenty years ago, when I talked about how Chinese American kids need to build up their cultural confidence, many first-generation Chinese immigrant parents were opposed because they wanted their children to be fully immersed into American culture,” Xia said.

Now, a new generation of Chinese immigrants has a growing social status and their contribution and participation in society has significantly increased, Xia said. “The momentum is here.”

The U.S. Asian population grew 72% between 2000 and 2015, from 11.9 million to 20.4 million, the fastest growth rate of any major racial or ethnic group, according to Pew Research Center. As of 2015, 24% of Asian Americans were of Chinese origin, the largest single origin group. Pew expects Asians to be become the largest immigrant group in the U.S., surpassing Hispanics in 2055.

After the Atlanta massacre, nearly 1,000 Asian American business leaders across the nation, including Zoom CEO Eric Yuan and Alphabet Inc. CEO Sundar Pichai, pledged to donate $10 million toward causes that support Asian American and Pacific Islander communities. Chang’s daughter, who operates the NiHao restaurant in Baltimore, teamed up with five well-known Asian restaurateurs to donate more than $10,000 to an anti-Asian discrimination campaign.

“The key is how to use the money. Can it be used to promote Asian Americans to participate in politics and discuss politics, make their voices heard, build consensus among Asian people, and unite all the forces that can be united to work for our rights?” Chang said.

Two weeks after the marathon route run, the New England Chinese American Alliance organized the second campaign. At a rally Sunday at Boston Common, organizers urged educators and school leaders to bring the Asian American story into the curriculum.

“The next generation needs to learn our ancestors’ history in this country before they can build confidence,” Xia said.

Education is a good starting point because it’s an area where all Asian Americans are on common ground, especially due to the high value many place on education, Xia pointed out. “We certainly would like to have more of our voice heard in areas such as politics and business,” Xia said, “But if your children are laughed at for bringing dumplings to school, what else can you do?”