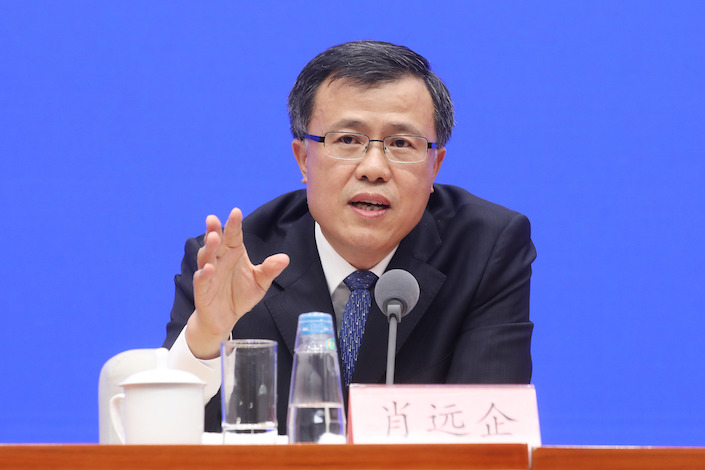 Chinese regulators will step up scrutiny of financial institutions’ shareholding structures and tighten oversight of major shareholders and management to root out risks in the financial system, said Xiao Yuanqi, a vice chairman of the China Banking and Insurance Regulatory Commission (CBIRC).

Strengthening corporate governance is key for financial institutions to enhance risk control, Xiao said in an interview on the sidelines of the Boao Forum for Asia.

Since China initiated a sweeping crackdown on financial market misconduct in 2017, risks in some banking institutions have been successfully removed through restructuring to allow institutions to return to a healthy track, Xiao said. For example, Shandong-based Hengfeng Bank Co. Ltd., which was rattled by executives’ massive misappropriation, won regulatory approval in 2019 for a restructuring led by the local government. Before that, regulators took over Inner Mongolia-based Baoshang Bank Co. Ltd. and rescued Liaoning-based Bank of Jinzhou Co. Ltd.

But efforts are still going on to combat risks in small banks, trust companies and insurers, Xiao said.

Data from the CBIRC showed that nonperforming loans in China’s banking industry totaled 3.6 trillion yuan ($552 billion) at the end of March. The ratio of bad loans to total assets stood at 1.89%, down 0.02 of a percentage point from the beginning of the year.

Years of battles to clean up financial risks have shown how large shareholders’ overwhelming control of financial institutions, mostly through hidden shareholdings and affiliated parties, has brewed risks, Xiao said.

At the same time, flawed corporate governance and weak internal controls allowed management of some institutions to seek illegal benefits while hurting the interests of institutions and customers, he said.

“These are the painful lessons we learned from previous efforts to deal with risks,” Xiao said. The CBIRC will tighten supervision of financial institutions’ major shareholders and senior executives, he said.

Moving forward, the regulator will focus on preventing new risks from emerging in financial institutions by enhancing their corporate governance and internal control mechanisms, especially in the rural credit system, the vice chairman said.

As a major part of the fight against financial risks, the CBIRC has pushed banks to reduce shadow banking since 2017, leading to a dramatic decline in off-balance sheet lending, Xiao said.

As banks pared back off-balance sheet assets, regulators have offered more options for banks to replenish capital via equity sales. Xiao said such moves will not only help banks to enhance capital but also will improve their governance by introducing new shareholders.

U.K.-educated Xiao was previously in charge of overseeing joint-stock banks, city banks and large state-owned banks. As the CBIRC’s chief risk officer, Xiao talked a lot about defusing and preventing financial risks. In a briefing earlier this year, he said the regulator was continually alarmed by growing risks from shadow banking. He also warned that banks’ nonperforming loans could rise.