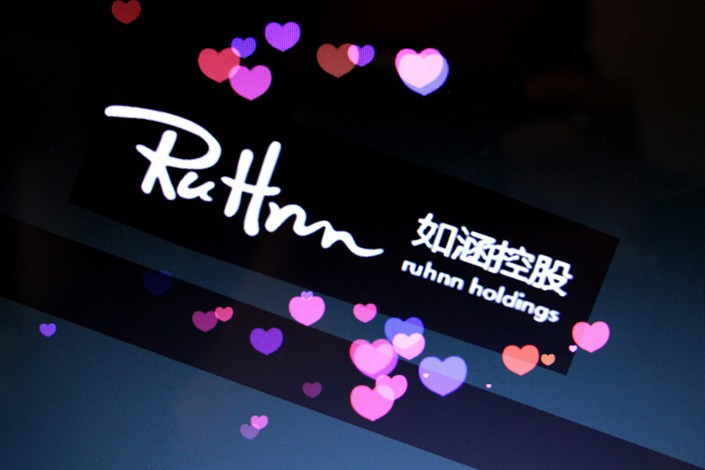 Ruhnn started out as a factory and grew its business by having influencers hawk its products online. Photo: IC Photo

Three founders of Ruhnn Holding Ltd., a Chinese outfit that sells apparel through its own stable of online influencers, have taken their company private after about two underwhelming years on the Nasdaq.

The trio of founders — Feng Min, Sun Lei and Shen Chao — have purchased all of Ruhnn’s American depositary shares (ADSs) that they do not already own for $3.50 each, representing a discount of about 72% on its 2019 IPO price of $12.50, the company said in a statement Tuesday.

The company’s ADSs closed at $3.38 on Monday, the day before the company asked the Nasdaq to suspend trading of its stock due to the privatization deal.

The deal was made through a merger with Runion Mergersub Ltd., a wholly owned subsidiary of Runion Holding Ltd. that was set up by the trio, according to the statement.

Hangzhou-based Ruhnn runs more than a dozen online stores on third-party e-commerce platforms, most of which operate under the names of its influencers. It makes money through online sales of clothing, jewelry and other apparel, some of which it designs.

Ruhnn started out as a factory and grew its business by having influencers like Eve Zhang, one of the company’s co-founders, hawk its products online.

Its Nasdaq debut in April 2019, when it raised $125 million, was far from auspicious. Ruhnn’s stock plunged 37% on its first day trading and its share price has remained depressed ever since, falling as low as $2.26 in October 2020.

The company’s business has struggled lately. According to its latest earnings report, revenues for the third quarter of 2020 fell 9% year-on-year to 248.5 million yuan ($38.3 million). Ruhnn blamed the drop on sluggish product sales, which slumped 38% year-on-year.

Still, the company’s net loss again narrowed to 31.2 million yuan from 50.1 million yuan in the in the third quarter of 2019, according to the report, largely due to lower fulfillment spending, the cost of processing and delivering orders.

The report showed that Ruhnn had significantly increased its number of signed online influencers and shut down a number of online stores, as it shifted the focus of its business toward managing influencers on behalf of brands. As of the end of September, the company had signed 180 key opinion leaders, up from 146 a year earlier. Over the same period, its number of online stores fell to 17 from 23, according the report.

In November, Ruhnn received its first offer to take the company private at a price of $3.40 per ADS, though the price was raised to $3.50 in the final merger agreement, according to Tuesday’s statement.