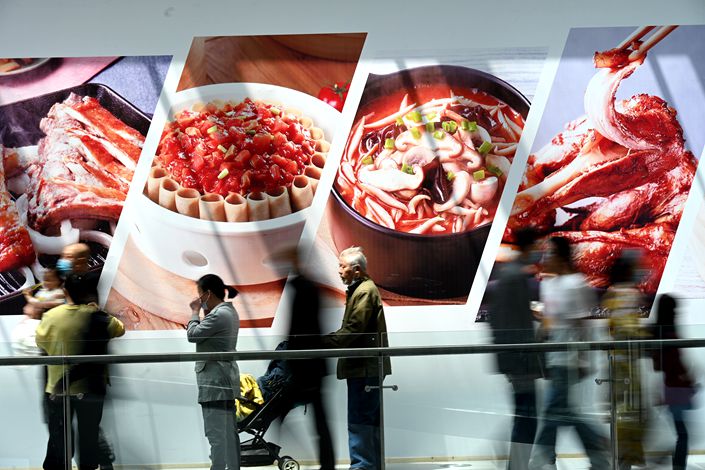 Xiao Jian is part of a new generation of increasingly sophisticated Chinese when it comes to understanding what goes into their bodies. But he’s far less aware of the big efforts behind China’s now-widespread nutritional labels that people like himself rely on to make their eating choices.

Xiao decided to do something about his heavy frame back in 2013, including better control of what he ate. As part of that, he started following his daily energy and protein intake, seeking to lower the former to reduce his weight and raise the latter to build up muscle.

The effort paid off when his weight fell from 100 kilograms (220 pounds) to the current 60 kilograms. While he generally avoided packaged goods, he was also careful to pay attention to the nutritional value of the ones he did eat — especially for their protein and energy content.

“Carbohydrates, fat content, protein, sodium, these are things you can usually find,” he said, referring to his reliance on nutritional content labeling that has become a fixture on most packaged Chinese food products, similar to what is now common in the West.

A 2015 survey found that 59.8% of Chinese between the ages of 18 and 60 were consuming packaged foods, reflecting the nation’s rapid economic development over the last three decades.

To help them better track and understand what they eat, China began requiring nutrition labeling for packaged foods starting in 2013, including how much energy, protein, fat and carbohydrates they contained. The policy has ushered in a new era of awareness about the nutritional value of what average Chinese consumers eat and drink, to the point where many like Xiao now check such labels whenever they buy packaged food.

But what goes into an actual nutritional label in China is still very much a work in progress.

A second round of public comment officially closed at the end of last year for the latest overhaul of the country’s main regulation regarding nutritional labeling, which is being overseen by China’s National Health Commission.

The latest edition of the regulation adds requirements for detailing added sugar and saturated fat on nutritional labels, and is exploring potential requirements for labeling of some products with high salt, oil and sugar content, Caixin understands.

The latest changes take particular aim at increasingly unhealthy diets that have come with the nation’s rapid modernization, including the introduction of widespread packaged foods with high amounts of saturated fats, sodium and sugar. Accordingly, the newly amended regulation is intended to help consumers take better control of their health and lower their risk of obesity, cardiovascular and cerebrovascular disease, diabetes and other chronic conditions linked to diet

Catching up with the West

Compulsory food labeling began becoming common practice in developed countries towards the end of the last century as a tool for educating the public on nutrition. China began adopting many similar policies following its accession to the World Trade Organization in 2001, putting it on a more common development path with other countries.

The predecessor to China’s National Health Commission issued its initial regulation on nutritional labeling at the end of 2007, calling for the inclusion of energy, protein, fat, carbohydrates and sodium content. But that regulation simply spelled out labeling recommendations, and did not make the practice mandatory.

An updated version took effect in 2013, making labeling mandatory for five elements: energy, protein, fat, carbohydrates and sodium content. A person familiar with that update said debate was particularly fierce at the time. On the one hand, many smaller food-makers worried over the impact on their business, including inspections to make sure they were in compliance. Large names worried over the potential for big fines if inspections uncovered non-compliance issues.

In the end, the new mandatory labeling requirements produced clear results, said Fan Zhihong, an associate professor at the College of Food Science & Nutritional Engineering. In 2013 when the amended regulation was rolled out, she said, her research showed there were still many errors in food nutritional labeling around the country.

“But such errors became harder and harder to find with each passing year,” she said. “The progress was huge. It was a great educational process for both consumers and manufacturers.”

But gaps in the regulation have also led to some cases where labels were used to mislead consumers. One notable recent case involved Yuan Qi Sen Lin, known for its bottled beverages including fruit-flavored drinks and milk teas. The latest version of the labeling regulation states that beverages containing less than 0.5 grams of sugar per 100 milliliters of liquid can be labeled as “sugar free,” though there is no specific requirement for stating sugar content.

In the lack of such a requirement, Yuan Qi Sen Lin took liberties by labeling its milk tea as “Zero Sucrose.” In fact, the drink was sweetened by fructose, another form of sugar, which wasn’t disclosed on the label. In April the company issued an apology and said it had changed the label to simply “Low Sugar”.

“It was a bit of a circus. When the revised regulation comes out, sugar content will definitely need to be listed,” said Huang Zeyin, a researcher at the Institute of Food and Nutrition Development under the Ministry of Agriculture and Rural Affairs.

The latest revision that is now in progress began in 2016, and is receiving input from a number of bodies including the Chinese Nutrition Society, the China National Center for Food Safety Risk Assessment and the Shenzhen Institute of Standards and Technology.

Following the rounds of public comment, the biggest changes to the latest draft are the widening of what must be labeled, the addition of labeling requirements for sugar and saturated fat, and inclusion of “front of package” (FOP) labeling rules.

Recent research showed that three-quarters of people queried were aware of nutritional labels, but only about 60% would actually read such labels when shopping. Nearly 80% said they hoped for promotion of more and better front-of-package labels, with sugar, salt and fat content as the most important items in need of such labeling.

In addition to addressing actual nutritional content, the new amended regulation is also expected to take on a greater role in standardizing methodology, for example, by dictating how such content should be measured. Most companies have gradually updated their facilities and technical abilities in recent years to include laboratories and staff trained at testing for energy, carbohydrate, protein and other key nutrient levels in their products, said food safety consultant Zhang Jiabin.

But some may need to add equipment and expertise or contract with outside labs to be able to accurately test for sugar, saturated fat and vitamin and mineral content under the amended regulation, adding to their costs, he noted.

Want Want Group, a major maker of snack foods and drinks, worries that the need for “high salt” “high sugar” and “high oil” being discussed for front-of-package labels under the amended regulation could mislead consumers. It noted that such labeling could give consumers a negative impression of many of its core snack products that were never meant to be consumed as proper meals and instead were simply for enjoyment in smaller quantities.