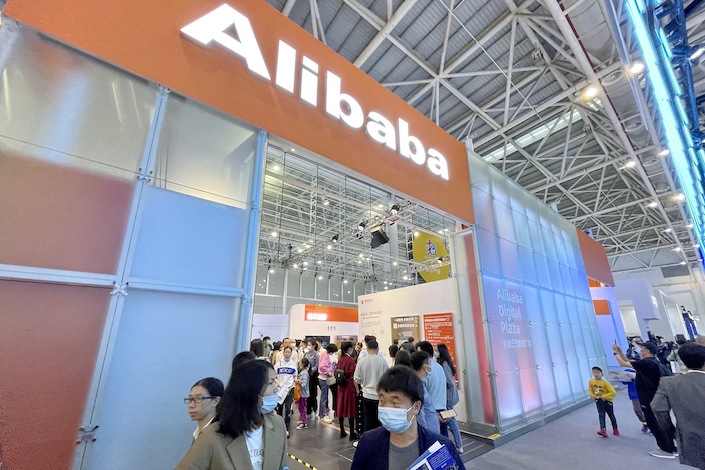 Alibaba made a high-profile foray into real estate in July by investing HK$1.86 billion ($239.4 million) in E-House

Amid mounting pressure from a regulatory antitrust crackdown, e-commerce giant Alibaba Group Holding Ltd. offloaded its entire stake in a real estate trading platform, retreating from a new business for which it once held high hopes.

Alibaba divulged a plan April 29 to transfer its 85% stake in Tmall Haofang, a real estate trading platform it launched in September, to partner E-House (China) Enterprise Holdings. In return, Alibaba would increase its holdings of E-House shares to 22.57% from 13.26%, further strengthening its position as the second-largest shareholder of one of the country’s biggest property agencies.

The restructuring marks a major retreat by Alibaba from the online property agent business as it agreed to completely exit from Tmall Haofang’s business operations following the transaction.

Alibaba made a high-profile foray into real estate in July by investing HK$1.86 billion ($239.4 million) in E-House and outlining an extensive partnership in online and offline property businesses. In September, Tmall Haofang was launched with an initial investment of 5 billion yuan ($771 million). Alibaba held 85% and E-House 15%.

Alibaba made the move as it came under increasing scrutiny of its sprawling business range by antitrust regulators. The company last month was fined a record 18.2 billion yuan for violating antitrust laws by forcing vendors to choose between its services and those of its rivals.

Although Alibaba never linked its retreat from Tmall Haofang to the stepped-up antitrust enforcement, the deal is a rational choice for Alibaba.

Tmall Haofang has been a controversial business for Alibaba since the beginning. Supporters said the business could succeed by leveraging Alibaba’s massive customer base and resources. But skeptics said Alibaba didn’t have experience running real estate operations, and E-house was not a partner of strength.

Tmall Haofang has yet to set up a clear business model. Under the initial plan, Alibaba was to provide platform technologies, and E-House was to acquire customers and promote sales. Real estate developers, brokers and financial institutions could all join the platform to provide housing and financial services. Tmall Haofang was set to challenge major online real estate brokerage KE Holdings Inc.

Tmall Haofang started a price war when it entered the market, cutting its commission fee to roughly 15% of what KE charged. The fee was inadequate to cover the platform’s operating costs, but Tmall Haofang pledged to subsidize the business over three years.

Tmall Haofang’s business development didn’t go as expected, however, and the partnership between Alibaba and E-House was stuck at the initial stage, with E-House introducing developers to open stores on Alibaba’s e-commerce platform to market their projects.

Tmall Haofang engaged in only the new-house business, not the larger pre-owned house trading business, which requires more complicated offline services. Meanwhile, the tightening supervision of internet financial services, especially targeting Alibaba’s Ant Group, also made it more difficult for Alibaba to use its online financial services arm to fuel growth of the property business.

After Tmall Haofang’s divestiture by Alibaba, its future business relationship with Alibaba remains unclear. Strict real estate market regulation will be the major challenge for Alibaba to use its customer, data, and financial services resources to assist the venture.

Niu Mujiangqu is a corporate news reporter at Caixin Media.