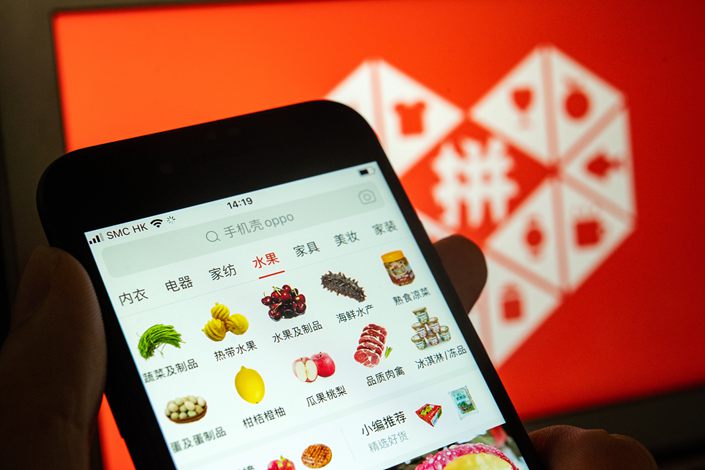 In a bid to find new sources of growth, Pinduoduo has invested heavily since late 2020 in a new grocery service, aiming to grab a share of the business that boomed during the pandemic lockdown. Photo: VCG

The company also gained a growing user base. In the first quarter of this year, it had an average of 724.6 million monthly active users, up 49% year-on-year. The number of Pinduoduo’s active buyers in the 12-month period ended March 31 increased by 31% year-on-year to 823.8 million, higher than its rival Alibaba Group Holding Ltd.’s 811 million in the same period.

In a bid to find new sources of growth, Pinduoduo has invested heavily since late 2020 in a new grocery service, aiming to grab a share of the business that boomed during the pandemic lockdown. In November, Pinduoduo secured $6.1 billion in new funding from bond and equity sales, mainly to pay for its new business expansion.

Pinduoduo said in a separate statement following the release of the results that Duo Duo Grocery, its next-day pickup service that offers perishables directly from farmers and agri-merchants, is seeing strong demand from consumers.

“Since the service started in August 2020, Duo Duo Grocery has catalyzed the creation of millions of jobs up and down the entire supply chain and provided an additional income stream for existing shops that serve as collection points,” the company said.

Pinduoduo, however, is facing heightened regulatory scrutiny. Earlier this month, the company, along with takeout titan Meituan, was summoned by the Shanghai Consumer Council over consumer protection issues. The authority said (link in Chinese) that Pinduoduo has problems with its product quality, forced cancellations of orders, post-sale customer services and fake discounts.

In April, Pinduoduo was among the 34 internet firms that were summoned by the country’s market watchdog and a few other regulatory bodies. The regulators ordered them to stop abusing their market power and cease all illegal activities within one month or face “severe punishment,” in the latest phase of a broader antitrust crackdown.

Pinduoduo has faced growing legal troubles over the years, mainly involving allegations of counterfeiting, and disputes with vendors. Tensions between the platform and its partner merchants are growing, with many vendors complaining that Pinduoduo is undermining their interests as the platform is growing its own direct sales business.

Meanwhile, Pinduoduo also jolted the market in March with an unexpected leadership shakeup. In late March, Colin Huang Zheng, the billionaire founder and chairman of Pinduoduo, stepped down from the company’s board and gave up the 1:10 super voting rights attached to his Pinduoduo shares.

Although Huang, 41, had relinquished the CEO title in July, his exit from the company’s management still caught the market off-guard. “Huang has been the nexus of Pinduoduo’s decision-making,” a company source said. “There is nothing in Pinduoduo that Huang doesn’t know,” said another company source.

Huang said his departure was part of Pinduoduo’s long-planned transition to a new generation of leaders and to cope with a changing market environment. But the news still spooked the market, dropping Pinduoduo’s share price by more than 16% in two weeks.