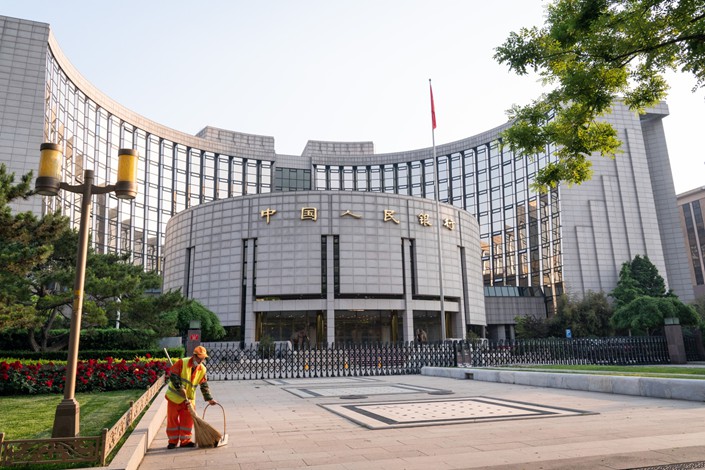 (Bloomberg) — China’s money market has this week signaled concerns about a potential liquidity crunch, but the central bank is expected to resist boosting fund injections.

That’s partly because it may get a helping hand from the nation’s central and local governments. June is usually a big month for fiscal spending, during which the People’s Bank of China would hand out funds that the authorities gathered via taxation, to commercial lenders. Banks would then use the cash for purposes such as infrastructure projects.

The fiscal spending would help replenish the interbank liquidity pool that has been in focus, amid concern over a surge of issuance in government bonds and as banks hoard money for quarter-end regulatory checks. Traders this week pushed a gauge of interbank funding costs to more than a three-month high.

However, the central bank is not expected to abandon a pattern of minimal fund additions since the start of 2021, as authorities seek to avoid a buildup of leverage in financial markets. The PBOC is seen staying put as 200 billion yuan ($31 billion) of one-year policy loans come due next Tuesday, with eight out of 10 traders and analysts surveyed by Bloomberg this week forecasting it to roll over the cash without pumping in additional funds.

“China’s central bank will remain calm despite higher demand for funds as the overall liquidity shortage won’t be huge, thanks to the fiscal spending,” said Ming Ming, head of fixed-income research at Citic Securities Co. “I expect it to refrain from net liquidity additions this month, either in daily operations or with its medium-term lending tools.”

This month, the PBOC is expected to offer lenders some 600 billion yuan in net fiscal spending, Ming said, adding that the injection can help absorb the majority of the 660 billion yuan of debt that local governments are forecast to sell in June. That’s higher than the average of 435 billion yuan on a net basis handed over to lenders by the central bank in June over the past three years, according to Bloomberg calculations.

Concerns over a liquidity shortage have ebbed in recent days. The overnight repurchase rate — an indicator for interbank borrowing costs — fell nearly half a percentage point in three sessions to reach a one-week low of 1.88% on Thursday.

The yield on 10-year government bonds also fell from a one-month high. Traders have been bracing for a rout in China government bonds since March after the larger-than-expected quota for the sales of local government debt was announced at the National People’s Congress. So far, that rout hasn’t materialized.

That doesn’t mean the PBOC will stay on the sidelines in the event of wild swings in rates. The central bank could still net inject short-term liquidity with its open-market operations for the first time since March later this month, if funding costs rise as demand for cash increases more than expected, six of the respondents in the survey said.

“The PBOC can use its open-market operations to soothe market volatilities, though it won’t want to push overnight borrowing costs too low,” said Mary Xia, an analyst at UBS Securities Co. She added that bond yields will face upward pressure in the third quarter, as “the supply of local government debt continues to be large.”