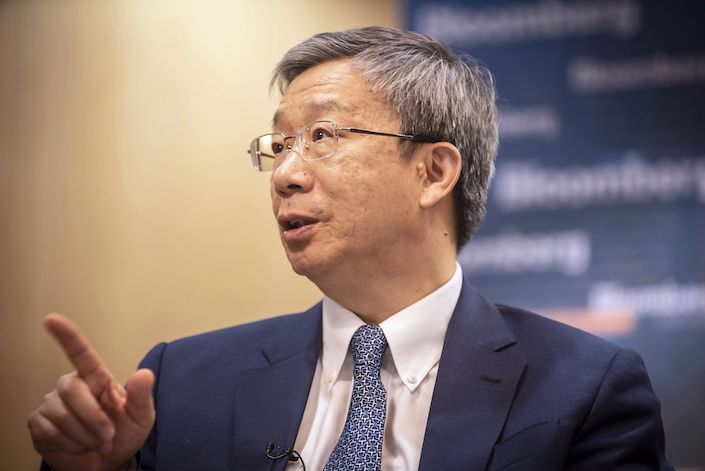 (Bloomberg) — China’s central bank Governor Yi Gang said consumer inflation is likely to stay below the government’s target this year and monetary policy must remain stable as he sought to downplay concerns over rising prices.

Inflation is expected to stay under 2%, Yi said at the Lujiazui Forum in Shanghai, below the government’s official target of about 3%. The economy is operating within a reasonable range close to its potential level of output, and prices are overall manageable, he said.

“China maintained a normal monetary policy over the pandemic last year, and domestic demand remains steady, which will help keep prices stable overall,” the governor of the People’s Bank of China (PBOC) said. He declared that monetary policy must “remain stable.”

Consumer inflation accelerated to 1.3% in May, government data showed Wednesday, less than economists’ estimates of 1.6%. Producer prices have been surging at a faster pace, largely reflecting commodity prices, fueling concerns that inflation pressures could spread more broadly. So far, there’s little evidence of that happening as factories have been absorbing rising costs.

Yi’s comments were seen as relatively dovish and an attempt to curb inflation expectations that may have been stoked by rising producer prices.

“It seems that the People’s Bank of China wants to manage the market expectation,” said Raymond Yeung, chief economist for Greater China at Australia and New Zealand Banking Group. “They want to reiterate the current policy stance” and don’t want the market to be “misguided” by the stronger-than-expected data.

Yi said China’s interest rate is at an appropriate level, and it’s still relatively low compared with rates in other developing markets.

At the same time, the governor warned that China “must not lower our guard against inflation and deflation pressures from all sides,” as there are still uncertainties with the global pandemic, economic recovery and macro policies.

Guo Shuqing, chairman of the China Banking and Insurance Regulatory Commission, also highlighted external concerns, saying global inflation has climbed higher than expected and may not be as transitory as some experts predict.

China’s 10-year government bond futures extended gains after Yi’s comments and were up 0.1% as of 11:52 a.m. local time.

Yi’s comments indicate that authorities are paying more attention to domestic demand reflected by the consumer price index rather than producer prices, which are driven more by rising commodity prices abroad, according to Hao Zhou, senior emerging markets economist at Commerzbank AG.

The governor also said potential economic growth will slow as the economy shifts toward high-quality development from high-speed growth, while the comparison base expands. The aging population will help curb inflation, and the economy’s transition toward green energy might add to price pressures, he said.

Authorities will encourage financial institutions to use monetary policy tools to help the nation achieve the goal of becoming carbon neutral by 2060, Yi said.

“The PBOC seems to be comfortable with interest rates at current levels,” said Michelle Lam, Greater China economist at Societe Generale SA. Yi’s comments about the longer-term deflationary pressure from the aging population and lower potential growth are “slightly dovish,” she said.