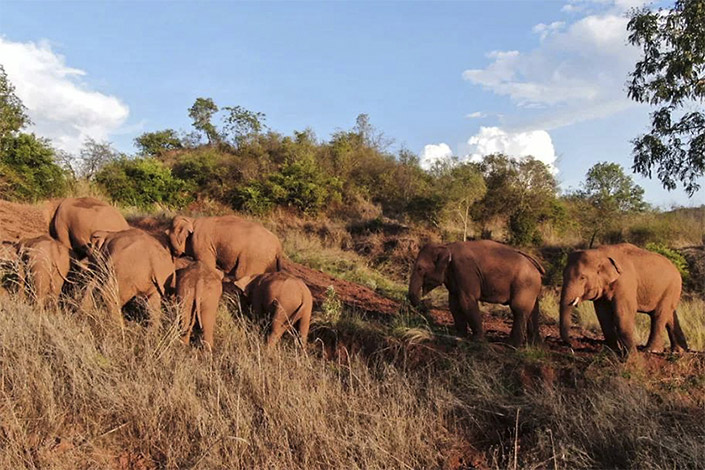 A herd of more than a dozen wild Asian elephants migrating north in Southwest China’s Yunnan province has been lingering in a local county for six days, with experts saying they are waiting for a lagging member to return as authorities encourage the herd to turn back.

A young male elephant left the herd Tuesday when others crossed into Yimen county in Yuxi, a city about 90 kilometers (56 miles) south of the provincial capital of Kunming. He then spent three days roaming through the smaller city of Anning before entering a district in Kunming, according to state-run broadcaster CCTV. The elephant is now about 16 kilometers away from the 14 other members of the herd, CCTV reported.

Although the elephants in Yimen remained moving, they were hanging around a local village, and have stayed in the county for six days, Caixin has learned. Chen Mingyong, a professor at the School of Ecology and Environmental Science of Yunnan University, told Caixin that the herd is waiting for the lone elephant to return.

He said the elephants in the herd called to the male over the weekend. “The herd made their calls for a longer time on Saturday (than on Friday), and then the lone elephant moved toward the group.”

Since leaving their natural habitat in March 2020 in Xishuangbanna, the southern-most prefecture in Yunnan, the elephants have trekked more than 500 kilometers, traveling mostly north through jungles, fields and villages.

However, their northbound movement has slowed in recent days. The herd walked 3.7 kilometers to the southwest Wednesday and another 8.12 kilometers southwest on Friday after local authorities used food and drones to encourage them in a direction back toward their home.

Authorities had formed a task force of more than 300 people to follow the elephants, with some responsible for feeding the animals and others setting up electronic fences around them.

Chen said human-made efforts to block the roads north are the main reason for the slowdown in the herd’s progress north.

Ideally, Chen said, the hope is to block their way north and using incentives such as food to lead the elephants “all the way south” to their natural habitat in Xishuangbanna. However, he pointed out that it’s the wrong season to execute the plan.

“We need to at least wait until the end of the rainy reason,” Chen said. “During the rainy season, the waters of the Hong River will rise, making it difficult for calves to wade through.”