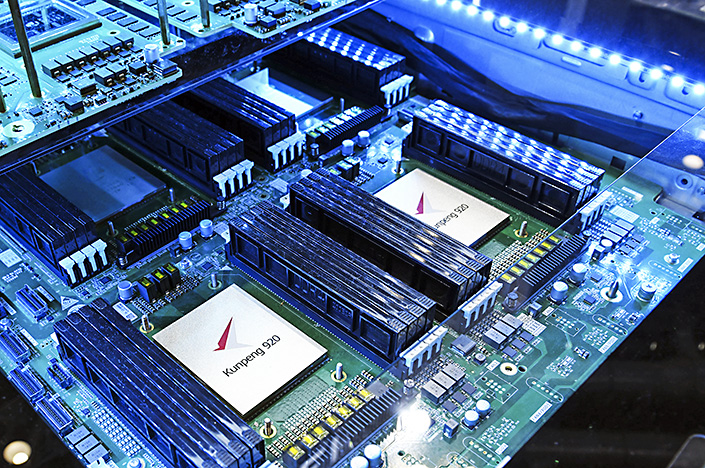 Huawei chipsets on display at an industry expo in Beijing on Sept. 8, 2020. Photo: VCG

(Nikkei Asia) — Huawei’s chip design arm has struck a deal aimed at building up its domestic supply chain, a local partner said on Tuesday, in a first public move against a U.S. clampdown aimed at cutting its access to vital technology.

“Huawei’s HiSilicon is stepping up efforts to push to build a domestic chip packaging and testing supply chain,” JT said in the filing on Tuesday.

“Both parties aim to expand collaboration on semiconductor packaging tool development in a bid to solve the ‘neck-choking’ problem and realize a self-sufficient and controllable industry,” the filing said in an apparent reference to U.S. efforts to restrict supplies to Huawei.

JT’s share price had jumped nearly 20% as of the end of morning trade on Wednesday.

Founded in 2004 in Shenzhen, JT describes itself as an equipment-maker essential for the production of consumer electronics, automotive electronics, space and aviation, and defense technology. It counts China’s largest home appliance maker Gree, rival brand Haier and electronics assembler Flex among its main clients.

The U.S. Commerce Department since May 2019 has repeatedly ratcheted up export controls against Huawei, citing national security concerns. It aims to cut access to American technologies for Huawei and its subsidiaries.

As part of the curbs, the U.S. has blocked many of HiSilicon’s suppliers including Taiwan Semiconductor Manufacturing Co. and ASE Technology Holding — respectively the world’s biggest contract chipmaker and biggest chip packaging and testing service provider — from working with the Chinese company because their processes involve U.S. technologies.

The U.S. move hit Huawei’s core chip development and its flagship smartphone business, where its market share plunged to only 4% in the first quarter of 2021 from 18% a year ago, when it was still the world’s second-largest phone maker.

The embattled Chinese tech giant has not given up the semiconductor capability it built over the past several decades. Huawei has invested in more than 30 Chinese chip-related companies in less than two years, and in the first six months of this year has acquired stakes in 10 domestic semiconductor-related companies.

It has also ramped up its global hiring, especially in Europe, for staff to work in semiconductors, artificial intelligence, software and autonomous driving technologies.