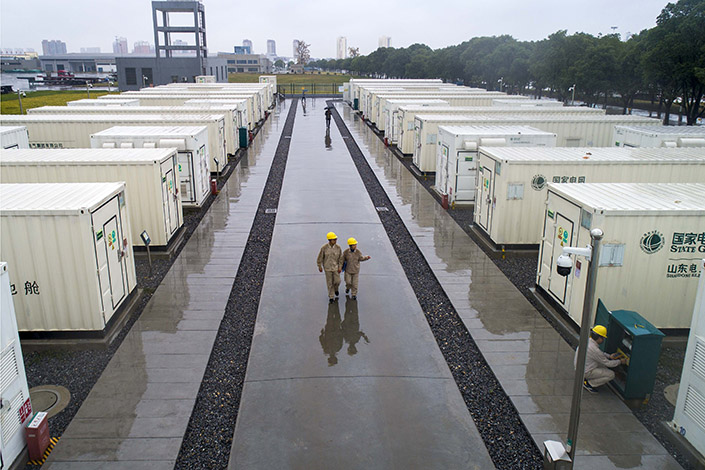 The topic was center stage at a Saturday forum sponsored by the National Energy Administration, including discussion of the safety issues currently holding the technology back. Another issue is the relatively high costs of such power storage, which also undermines renewable power’s commercial viability compared with other sources that can simply be powered up and down based on demand and thus don’t require such storage.

China often makes such big industrial policies as part of its series of five-year plans that date back to the planned economy era. Installation of wind and solar energy was a major part of the previous 13th Five-Year Plan that ran from 2016 to 2020. Now energy storage facilities for those wind and solar farms are being stressed in the recently unveiled 14th Five-Year Plan that runs from this year to 2025.

Providing such storage capacity is a critical element for making renewable sources like solar and wind commercially competitive with coal, nuclear and hydro power. Unlike the latter group, solar and wind are highly reliant on time of day and weather conditions.

That means that during peak sunlight hours or windy periods they often create more energy than is needed, which may be ultimately wasted without storage capabilities. When properly stored, such excess energy can be converted back into power during low-production periods like nighttime and low-wind conditions.

Next-generation ESS technology is mostly battery-based and comes in several forms, including electrochemical energy storage, compressed air energy storage and molten salt energy storage. Such technologies use batteries to store and release energy. They are separate from pumped-storage, an older technology that stores and releases energy by moving water between two reservoirs at different elevations.

China had commissioned 35.6 gigawatts of ESS projects at the end of last year, according to the China Energy Storage Alliance. The big majority of that — 89.3% — was for older-generation pumped-storage systems that aren’t included in the next-generation ESS plans. Electrochemical energy storage systems were second with a modest 9.2% of the total, though that figure was nearly double its contribution at the same time a year earlier.

Within the electrochemical energy storage category, systems using lithium ion battery technology make up the largest portion at nearly 90%. The remainder comes from lead-storage batteries. But lithium ion storage is still facing a number of challenges, including safety and high costs, which need to be improved before the technology can be broadly deployed.

One of the biggest safety concerns is the susceptibility of such technology to catching fire. One such fire broke out in April at an energy storage station in Beijing’s Fengtai district, leaving two firefighters dead and one employee missing.

“When it comes to the economics of energy storage, the risks from fire and safety have been generally overlooked,” said Sun Jinhua, a professor at the University of Science and Technology of China.

Costs for such battery-based storage are also high, at about 0.5 yuan (7.7 U.S. cents) for every kilowatt of energy stored during a single charge. That’s far higher than a target rate of 0.3 yuan to 0.4 yuan needed to make the technology more viable.