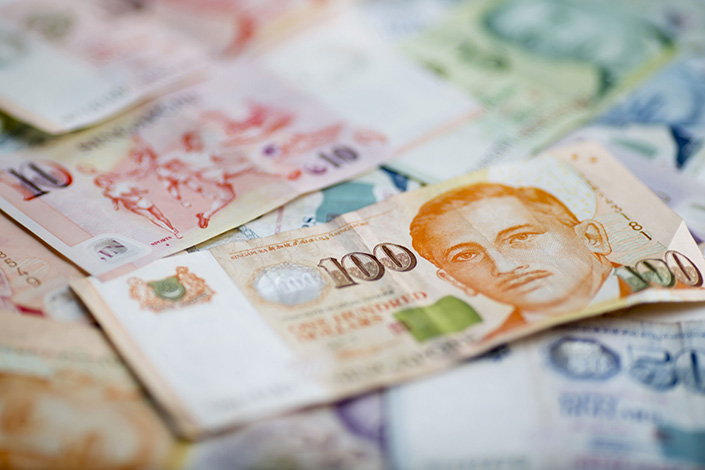 The image of Yusof Ishak, former president of Singapore, is displayed on a Singapore 100 dollar banknote in an arranged photograph in Bangkok, Thailand, on Sept. 18, 2015. Photo: Bloomberg

(Bloomberg) — The Singapore dollar is poised to outperform its Southeast Asian peers as a higher vaccination rate and rising core inflation may spur its central bank to start tightening policy sooner than its regional counterparts.

While all Southeast Asian currencies have been under pressure against the greenback since the Federal Reserve’s latest “dot plot” brought U.S. rate-hike forecasts forward, Singapore’s comparative success in dealing with Covid-19 may soon set the local dollar apart from its neighbors.

Despite Singapore’s new virus cases spiking to 88 on Sunday, the spread of the disease in the island state pales into insignificance next to what’s happening all around it. The daily tally in Indonesia exceeds 50,000 while figures coming out of Thailand, Malaysia and the Philippines are in the thousands.

“The Singapore dollar will likely benefit from its safe haven role in the EM Asian currency suite,” said Eugenia Fabon Victorino, head of Asia strategy at Skandinaviska Enskilda Banken AB in Singapore. “The relatively efficient inoculation program of the Singapore government should allow a faster reopening of the economy.”

More than 45% of Singapore’s population is fully vaccinated against Covid-19, versus as little as 3% in the Philippines, 5% in Thailand, 6% in Indonesia and 13% in Malaysia, according to data compiled by Bloomberg. This should help Singapore in its step-by-step approach to easing social distancing rules, while reopening plans in the rest of the region are thrown into doubt as the delta variant spreads.

Inflation figures due Friday add to the case for relative strength in the Singapore dollar.

Core consumer prices are forecast to have risen 0.9% in June from a year earlier, following a 0.8% reading in May that was already the highest since well before the pandemic.

This price data and the virus outlook may spur the Monetary Authority of Singapore to signal a more hawkish stance to its currency-focused policy in coming months, according to SEB’s Victorino.

Unlike other central banks that target interest rates, the MAS manages inflation and growth by guiding the export-dependent economy’s currency against those of its major trading partners. Monetary tightening typically involves steepening the slope of appreciation within an undisclosed policy band.

The upbeat outlook for Singapore policy makers contrasts with the situation faced by Bank Negara Malaysia, which has said its outlook “remains subject to significant downside risks,” and Bank of Thailand, where officials are prioritizing economic recovery after slashing their growth forecast.

Bank Indonesia has said it isn’t looking at tightening policy until late next year and Bangko Sentral ng Pilipinas has pledged to keep policy loose as long as necessary to support a recovery that it sees as “tentative.”

“The MAS is likely one of the first central banks in the region to tighten policy,” said Victorino. She expects the Singapore dollar to rally and approach 1.31 against its U.S. counterpart by end-2021, versus its closing level of 1.3571 on Friday.