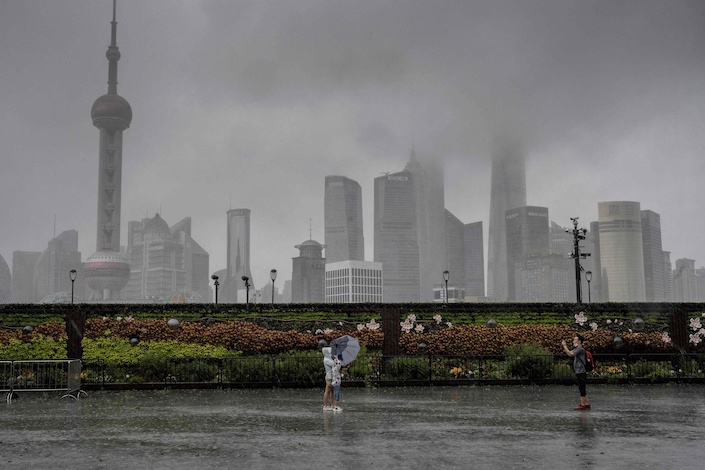 (Bloomberg) — Typhoon In-Fa, the powerful storm battering regions around Shanghai, forced some of the world’s biggest shipping ports to halt operations until at least Tuesday.

All of Shanghai’s ports and some in neighboring regions remain shut after closing over the weekend amid extreme weather, according to people familiar with the situation. The idled ports include Yangshan, part of the world’s biggest cluster of container terminals, which sits offshore to the south of Shanghai.

In-Fa slammed into Zhejiang province to the south of Shanghai Sunday, prompting authorities to evacuate more than 100,000 people and close schools, markets and businesses. Shanghai, China’s financial hub, was hit hard by stormy weather over the weekend, with images of street flooding, flying debris and uprooted trees shared on social media.

The port stoppages will affect deliveries of container goods, oil products, liquefied natural gas and bulk shipments like grains, the people said. The ports may be able to resume as early as Tuesday, although that depends on the storm’s path, they said.

Calls to the Yangshan Port Maritime Safety Administration’s general office went unanswered. The administrator hasn’t shared any update on the port since Saturday, when it said all ships were evacuated and all terminals halted operations.

By late Monday afternoon, In-Fa was pushing northwest and heading for Jiangsu province, Shanghai’s city government said, citing the national meteorological bureau. While Shanghai authorities downgraded the typhoon alert for the city to “blue,” the lowest of four tiers, they warned that strong winds and rainstorms would continue.

China earlier issued an orange alert for In-Fa, the second-highest, and took major precautions ahead of the storm after last week’s historic flooding in central Henan province, where at least 63 people died.

Shanghai relocated more than 360,000 people as of 10 p.m. Sunday, mostly from the Pudong district, the China News Service said. No deaths or injuries were reported.

Yangshan port evacuated hundreds of vessels, including all large container ships, as wind speeds off the coast reached 102 kilometers per hour (63 mph) over the weekend, the government-run Xinhua News Agency reported, citing the port’s bureau of maritime affairs.

Shanghai’s benchmark stock index was down 2.3% by the end of Monday after China continued its crackdown against private education companies.