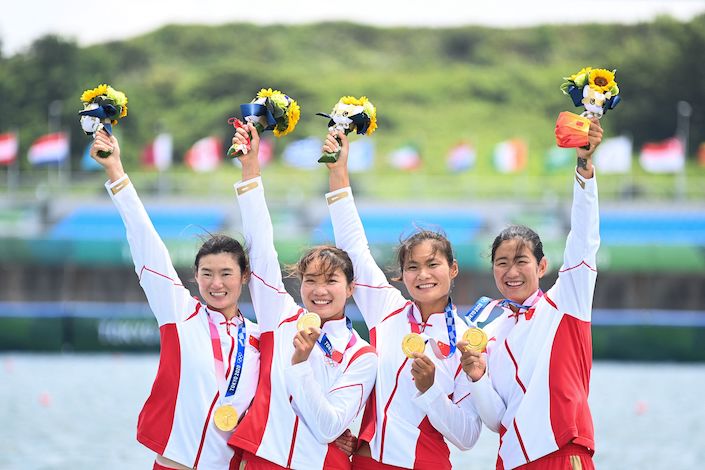 The Chinese women’s rowing team won its second gold medal ever at the 2020 Tokyo Olympics July 28, and the men’s team won its first Olympics medal.

In the history of China’s participation in Olympics rowing, there are three Olympiads that stand out — the 1988 Seoul Olympics, the 2008 Beijing Olympics and the 2020 Tokyo Olympics. The three events represent three phases in the leapfrog development of Chinese rowing sports.

At the 2008 Beijing Olympics, China won the gold medal in the women’s quadruple sculls, a historic breakthrough. Rowing in China was still relatively underdeveloped, and it was only in recent years that China started to take rowing more seriously. There is a gap between Chinese men and European and American men in terms of height, weight and muscle type (especially for international events), while the physical differences between Chinese and foreign women are less noticeable. That may make it relatively easier for Chinese women to achieve breakthroughs through hard training.

At the 2020 Tokyo Olympics on July 28, there were two surprises for the Chinese rowing team. First, a new of generation rowers — Cui Xiaotong, Lü Yang, Zhang Ling and Chen Yunxia — won the gold medal in the women’s quadruple sculls, setting a world record and finishing 6.23 seconds ahead of the Polish team in second. Since 2019, the Chinese women’s quadruple sculls team has won every competitions it entered.

Second, Zhang Liang and Liu Zhiyu won a bronze medal in the men’s double sculls, breaking the dominance of European and American rowers.

Europe’s dominance in rowing has deep cultural and historical roots. In 1829, the first rowing race between the University of Oxford and the University of Cambridge took place on the River Thames. The race is regarded as the origin of modern rowing sports, giving rowing a history of nearly 200 years in Europe.

Today, many British middle schools treat rowing as one of the important extracurricular activities, and for some it is even a compulsory subject. With a lofty status, a perfected training system and a profound cultural accumulation in European sports, the competition is also becoming increasingly fierce — a reason why medals in rowing have been distributed among several countries in the Olympic Games. If a country can win two or three gold medals, it is considered a strong rowing country.

With this background, China’s path to becoming a rowing powerhouse seems to be within reach. It is a result of technological innovation.

Among sports teams of the General Administration of Sports of China, the rowing team was the first to launch a scientific and technological innovation training project. Training assisted by science, technology and big data—from large-scale selection of cross-border talent to series of domestic rowing events, from the intelligent training of various auxiliary facilities such as land dynamometers to big data testing of the world-leading PEACH system—has achieved good results.

This achievement can also be attributed to the team’s “overseas self-improvement strategy.” Following China’s swimming team and track and field team, which achieved improved results after “going outside,” the rowing team resolutely chose to strengthen itself by using overseas resources with even greater efforts. This includes going to an overseas training base and competing and training along with teams from other countries.

Also, the coaching team consists of nearly 20 foreign coaches, including head coaches, a director of science and technology, a physical fitness coach, a rehabilitation coach, and an equipment coach. Among them are Sir Steve Redgrave, the sporting director and a gold medalist at five consecutive Olympics, Paul Thompson, the No.1 “spiritual leader from overseas,” and Hammert Bushbach, the head coach for the octuple sculls.

This is also a result of long-term devotion and persistence. After the Chinese rowers won their medals, stories of their painstaking training methods started to leak out. Rowing is probably the hardest event of all, requiring athletes to complete 8-hour, 30-kilometer round trips of rowing every day, repeating the exact same action thousands of times. In a sense, the 2,000-meter race could be compared to a stage in a human’s life: It includes an ambitious start; it goes through the torturous and painful process of accumulation of lactic acid; and it gives the hope and excitement of a possible win. Training days without any entertainment or relaxation is what has cultivated the iron willpower of team members.

The remaining rowing races may also bring surprises, or disappointments. Nevertheless, we should recognize the team’s performance, regardless of the results. Like track and field, swimming, and other events, success requires full focus and strength in every minute and every paddle stroke. We would like to see these successes be the beginning of breakthrough and a starting point on our way to becoming a rowing powerhouse.

But more importantly, we hope the great passion as well as the support and attention from the General Administration of Sport of China can further catalyze the sports industry as a whole and the integration of sports and education. We need to realize that this sport has great possibilities to further develop among students and the general public, and that is where the potential for the greatest success lies.

Yang Wang, former editor-in-chief of Channel 5 magazine, is the author of “The Brightest Ten Meters,” a biography of famous Chinese diver Tian Liang.