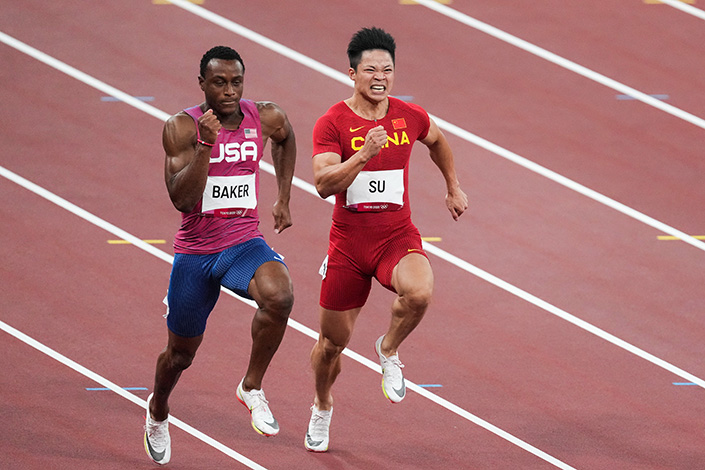 Chinese athlete Su Bingtian advances to the final in the men's 100 meter finals of the Tokyo Olympics on Sunday. Photo: VCG

In the 100-meter event in track and field, what does an extra one-hundredth of a second mean to an Asian-born sprinter?

For Su Bingtian, it means a lot —diligence, tears, willpower, courage, professionalism and team spirit. At the Tokyo Olympics on Sunday, the 31-year-old finished sixth in the final — in fact he was the first Asian man to make it to the Olympic 100-meter final in 89 years. A few hours ago, in the semifinal, he broke the Asian record for the event, running 100 meters in 9.83 seconds.

The late NBA star Kobe Bryant once said, speed belongs to everyone who works hard to gain an extra hundredth of a second. How about an extra eight-hundredths of a second?

Su has given his answer: three years of painstaking, dedicated and disciplined training, including 17 months of off-the-track reflection.

In 2018, when everyone cheered Su’s strong performance of 9.91 seconds twice in nine days and looked forward to seeing him break the 9.9-second barrier, injury struck. In 2019, a severe waist injury stopped him at the 2019 IAAF World Athletics Championships semifinal in Doha, Bahrain. In the 2020 season, he was absent from the track due to the Covid-19 pandemic.

Su was facing a tough situation: he was getting old, had no competition to focus on, had taken a shoulder injury in training, and most importantly, had spent 17 months off the track. But Su turned the long period on the bench into an opportunity for self-improvement.

There is a lot that can’t be changed. At 1.72 meters, Su is not a tall man among guys who run the 100 meters, who have an average height of 1.86 meters. He is not good with words, and sometimes appears uneasy in public events and commercial advertisements. At almost 32 years old, he is lingering at what is considered the end of a typical sprinter’s career. In fact, Su decided to retire in 2017, at the age of 28, but then changed his mind. Meanwhile, good habits and good discipline made Su into a professional competitor.

He never smokes or drinks, never dines out or goes for a night on the town.

Every day he follows the boring routine of a professional athlete: he gets up before 7 a.m., goes to sleep at 11 p.m. and has a one-hour nap built into his afternoon training sessions. He does not focus on a large amount of exercise alone. Every time he goes to train, he brings along a team doctor for massage and recovery during breaks. He was so obsessed with training that he didn’t accompany his wife when she gave birth to their first son.

As a professional sprinter, Su would massage his whole body with an electric foam shaft after every training jog, so as to activate his muscle. He even spends five to 10 minutes massaging his cheek muscles. One might think that this some sort of new-fangled method for maintaining a youthful appearance, but it’s actually meant to help Su keep his head and shoulders stable while in motion.

Before each race, Su would use a little tape measure, accurate to the millimeter, to adjust the starting block. By measuring the distance between the starting line and the block, Su could adjust it to the most suitable position and angle for him, thereby adopting the most comfortable starting position.

Although many people thought Su was making a mountain out of a molehill, experts believe that Su’s dedication to training hard has helped him break through, resulting in his brilliant performance at the 2020 Tokyo Olympics.

During the sprint group stage of the 2020 Tokyo Olympics on July 31, 2021, Su ran fast in the first 70 meters and slowed down in the last 30 meters to observe the competition — China internet users called this iconic maneuver “looking back to the moon.”

He finished the preliminary race at a time of 10.05 seconds, Su explained, he has been out of the game for a long time and needed to familiarize himself with the ground and the feeling of running. He also said that he did not use all his strength to avoid injury.

Sure enough, in the semi-finals on Sunday, Su clocked a time of 9.83 seconds, becoming the first Chinese sprinter to qualify for the Olympic 100-meter final and the only man in the 21st century to reach the highest level of the event at the age of 32 other than the legendary American sprinter Justin Gatlin.

In his excitement, Su repeatedly pumped his fist, roared and even lay on the ground after the race. Hundreds of millions Chinese, and many in Asia, shared that moment of joy.

On Sunday night, Su Bingtian in the sixth lane finished the men’s 100-meter final at 9.98 seconds, marking a new milestone in Chinese athletics. Su said that through years of effort, he finally stood on the final track for 100-meter event. “I think I have realized my dream and fulfilled the expectations of our seniors on young sprinters over the generations.”

Every step he has taken on that track is history, and almost every record he has set is a breakthrough for Asians. The ongoing pandemic created a long hibernation period for him, but Su has relied on his discipline and perseverance. For his entire career, he always clearly located his targets, as precisely as his unique stunt at the start: fully bending his body and staring ahead, like a cheetah ready to pounce.