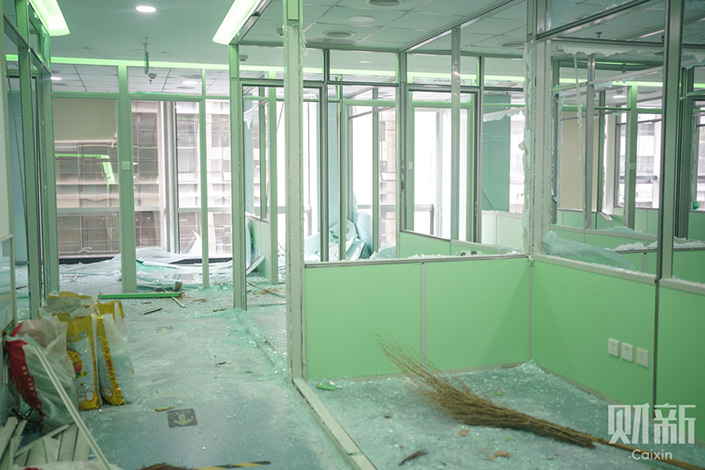 At a 24-hour coffee shop in Beijing’s Haidian district, private tutor Ming Tian was explaining a math question to students. A few blocks away in a 20-story building at the E-wing Center housing scores of after-school tutoring facilities, classrooms and offices were empty.

Huang Zhengxin, father of a daughter in middle school and a son in elementary school, was anxiously looking for alternative summer tutoring channels for his children. Meanwhile, Sun Ke, a veteran employee of an online education company, just lost his job.

So it goes as China’s sweeping overhaul of the giant tutoring industry creates millions of personal dramas across the country. Instructors are being thrown out of work in droves and Chinese parents now face new worries about securing their children’s futures. The upheaval grew out of a government clampdown unveiled in July that bans all tutoring related to the core school syllabus during vacations and weekends for students in elementary and middle school while barring private tutoring companies from going public or raising foreign capital.

Another senior executive at China Development Bank (CDB), the nation’s biggest policy lender, came under investigation by the Communist Party’s anti-graft agency as the government continues efforts to clean up corruption in the financial system.

Zhong Daohua, a senior manager with CDB’s general affairs department, is being investigated for “serious violations of discipline and law” — a phrase that usually refers to corruption — according to a statement (link in Chinese) released Friday by the provincial commission for discipline inspection in the northwestern province of Shaanxi. A team installed at the bank by the Central Commission for Discipline Inspection (CCDI) and the top graft buster’s local counterpart in the city of Xi’an, the provincial capital, are investigating Zhong, the statement said, adding that he remains in his job.

The Chinese embassy in Afghanistan was “operating normally” and embassy staff were “still at their posts and fulfilling their duties,” Foreign Ministry spokesperson Hua Chunying said at a regular news briefing Monday.

The embassy said in a statement Sunday that it asked all parties in Afghanistan to ensure the safety of Chinese citizens, institutions and interests, and reminded Chinese citizens to stay indoors as the situation in the country has become “extremely complex and severe” after the Taliban took control of Kabul.

Regulators took action against 19 institutions amid a tightening oversight of price-fixing in share subscriptions on Shanghai’s STAR Market.

The Securities Association of China (SAC), an organization operating under the supervision of the China Securities Regulatory Commission, said in a statement (link in Chinese) Friday that it found issues with the 19 institutional investors after launching a probe into the recent “high occurrence of uniform offering prices” in STAR Market IPOs.

After electing to plow ahead with the Olympic Games last month, the Tokyo metropolitan region faces a disaster-level situation as Covid-19 infections spread rapidly, threatening to overwhelm the hospital system as some ill patients are increasingly being told to stay home to recuperate, Japanese experts warned.

The Fujimino Emergency Hospital in Saitama, a prefecture just north of central Tokyo, highlights the scale of the challenge to Japan’s health-care system.

Hong Kong projects 2021 growth of as much as 6.5% as spending rebounds

Editorial: To tackle climate change, institutional mechanisms must be rationalized

China’s legal safeguards against workplace sexual harassment should be toughened up, including by clarifying the responsibilities of employers, experts said at a Beijing seminar after a sexual assault scandal at e-commerce giant Alibaba.

Police have detained two men on suspicion of “forcible indecency” after they were accused of assaulting a female employee at Alibaba Group Holding Ltd., according to a Saturday statement (link in Chinese). The detainees include the woman’s former supervisor.

Chinese actor Zhang Zhehan has lost around two dozen lucrative endorsement deals in the wake of social media uproar over photos of him posing at a controversial shrine in Japan.

More than 20 brands have since terminated brand ambassador or spokesperson contracts with the 30-year-old, including Coca-Cola, Pandora, Maybelline and Costa.