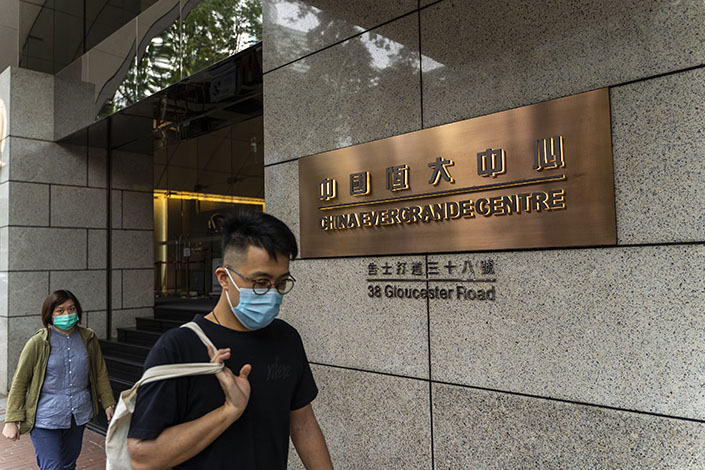 A pedestrian passes by Evergrande’s headquarters in Hong Kong in September 2020. Photo: VCG

Heavily indebted developer China Evergrande Group is in talks with several companies to sell its Hong Kong headquarters and a building in Guangzhou, sources told Caixin.

The negotiations show the growing seriousness in which Evergrande is taking a warning from China’s top financial regulators to “resolve debt risks” as the property giant struggles under the weight of $300 billion of debt at a time when the country is looking to prevent the real estate industry’s enormous liabilities from spilling over into the broader economy.

Yuexiu Property Co. Ltd., a state-owned real estate developer based in Guangzhou and listed in Hong Kong, is reportedly involved in the sale, according to Redd Intelligence, a think tank based out of New York and Singapore. Yuexiu Property told Caixin late Friday that it doesn’t have any information about the issue.

The capital market source came up with a lower estimate — between HK$11 billion and HK$12 billion — to take account of the impact of the recent protests and the pandemic on the city’s real estate market. However, the source pointed out that the sale won’t do much to help Evergrande raise cash because the company took out a HK$700 to HK$900 million mortgage on the property in 2018, which was just extended last year.

Evergrande is also in discussions with several companies to sell its former headquarters in Guangzhou. Since the company moved its headquarters to the neighboring city of Shenzhen, the Guangzhou building is now home to just Evergrande’s tourism and health units, as well as a handful of company departments, an industry insider told Caixin, meaning the entire building could be sold off without much trouble.

The 53,000-square-meter property, located in central Guangzhou, might get a price between 6.4 billion yuan ($984 million) and 7.5 billion yuan, a source familiar with the market told Caixin.

However, this assumes Evergrande can afford to wait for the right buyer. The market source pointed out that almost no deal for an office building has closed in the area over the past two years. “If Evergrande needs to sell it off quickly, the price would have to be much lower,” the source said.

On Thursday, the People’s Bank of China and the China Banking and Insurance Regulatory Commission summoned Evergrande’s senior management in for a talk, where the executives were told to “maintain stable business operations” and “resolve debt risks.”

As the regulators are getting more serious about Evergrande’s gigantic debt load, the company is accelerating efforts to raise cash to comply with the three “red lines” requirements.

Evergrande plans to sell its real estate assets since early June, according to Caixin’s previous reporting. On Aug. 10, it started trying to sell stakes in electric-vehicle and property services. It disclosed to the public (link in Chinese) on Friday that its electric-vehicle unit has held preliminary talks with Xiaomi Corp. to seek a strategic investment.

No deal has been announced.