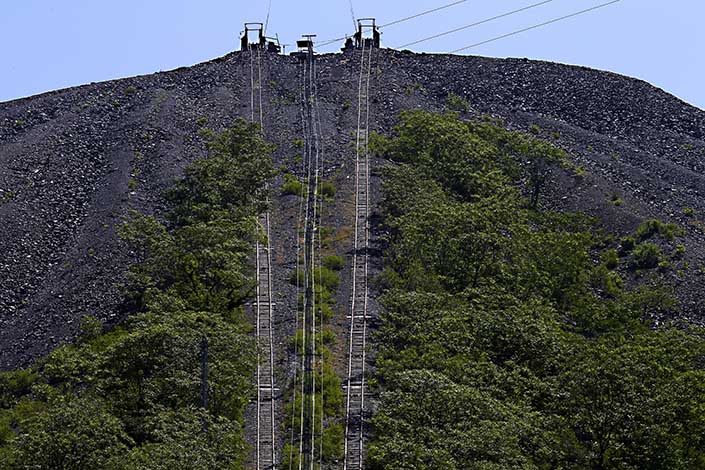 The last coal mine in Beijing’s Mentougou district gets demolished in June 2020. Photo: VCG

Hello ESG Biweekly readers, this week we have an expert view provided by Li Junfeng, the founding director of the National Center for Climate Change Strategy and International Cooperation (NCSC). The NCSC is a national institute directly affiliated with the Ministry of Ecology and Environment (MEE) that is dedicated to addressing climate change. As an influential expert on energy and environmental policy, Li drafted China’s national climate change action plan, Renewable Energy Law and IPCC assessment reports. Here is Li’s takeaway as stated in his recent interview with Caixin.

‘Crucial to change the mind of local government heads’

The greatest challenge for China’s ambitious carbon goals, according to Li, turns out to be people’s awareness of climate change, especially the governors who lead local authorities. Under past systems for evaluating and promoting government officials, local officials were incentivized to boost GDP growth by launching large-scale coal or petrochemical projects. To ensure China reaches its goal to peak emissions by 2030 smoothly, it is crucial to change the minds of local government heads and phase out these projects,” Li said.

Some people are still questioning the relationship between rising temperatures and carbon emissions. Li points out that the research on climate change is about science, while addressing the problem is about political decision-making. A clear goal (whether its limiting the average rise in global temperatures to 2 C above pre-industrial levels or preferably 1.5 C as stated in the Paris Agreement) has been reached through political consensus to create a sustainable future of all human beings. Therefore, Li believes that there is no point in debating further.

“China should not only focus on reducing the share of coal in its energy mix, but must also pay equal attention to reducing oil’s share.” Because China increasingly relies on overseas oil supplies, with those supplies exceeding 70% of the total, Li concludes that it is even more urgent for China to phase out oil than coal. He also argues that China should stick to meeting new energy demand with nonfossil fuel sources to achieve the ultimate goal of gradually replacing all fossil fuels with alternative energy.

Top leaders said at July’s Politburo meeting that China will pursue its peak emission and carbon neutrality goals in an “orderly” manner, and will correct any “campaign-style” carbon reduction measures employed by local governments. That’s because this kind of campaign-style carbon reduction lacks overall planing and may even affect businesses, supply chains and prices. This implies that China is expected to cool some aggressive steps to curb carbon emissions from heavy industry as it tries to balance achieving its climate goals with keeping the economy stable.

On July 23, the National Development and Reform Commission (NDRC) and the National Energy Administration (NEA) officially issued the Guiding Opinions on Accelerating the Development of New Energy Storage (加快推动新型储能发展的指导意见). According to the document, China will finish the transition of new energy storage early-stage commercial application to scaling development by 2025. Compared with the previous draft, the official document highlights energy storage security and requires faster establishment of technical standards of security.

At the meeting for the second half of 2021, the People’s Bank of China (PBOC) urged financial institutions to implement policy tools to cut carbon emissions and pledged it will provide eligible lenders with low-cost funds and encourage these financial institutions to offer financing at preferential interest rates for projects that produced significant carbon emission reductions, including advancing information disclosure on carbon emissions, promoting green financial evaluation and conducting climate risk stress tests.

The NDRC issued the Notice on Further Improving Time-Sharing Electricity Pricing Mechanism (进一步完善分时电价机制的通知). The notice requires to form effective marketized price signals, optimize the peak-valley TOU electricity pricing mechanism and further set up “Spike” electricity prices. The NDRC said that further improving time-sharing electricity prices, especially reasonably widening the price gap between peak and valley prices, will help guide users to use more electricity during the trough of the power system, and create more space for the development of pumped storage and new energy storage, which also facilitates effective consumption of new energy such as wind and photovoltaic power.

According to recent reports released by international rating agencies Moody’s and Fitch Ratings, the recent flooding to hit Central China’s Henan province indicates that climate change risks may increasingly add to the financial burden on China’s non-life insurers, with the potential to hurt their credit ratings. As of July 23, the direct economic losses caused by the flooding reached 81.9 billion yuan ($12.6 billion). Claims relating to the Henan floods will hurt the profits of Chinese-funded insurers. The total value of claims is expected to exceed 8 billion yuan, accounting for 0.7% of China’s gross non-life premiums in 2020.

On July 27, the Ministry of Ecology and Environment (MEE) issued the Notice on Implementing Carbon Emission Environmental Impact Assessment Pilots for Construction Projects in Key Industries (开展重点行业建设项目碳排放环境影响评价试点的通知), requiring pilot areas to report carbon emission environmental impact assessments of construction projects, formulate the calculation methods for carbon emissions, draft environmental impact reports, and establish corresponding working mechanisms before the end of this year. The pilot areas include the provinces of Hebei, Jilin, Zhejiang, Shandong, Guangdong and Shaanxi, as well as Chongqing Municipality. The notice encourages other qualified provinces to identify pilot zones as per actual needs and apply to the MEE to participate. The pilot will cover key industries such as electricity, steel, building materials, nonferrous metals, petrochemicals and chemicals.

State-owned energy giant China Petroleum & Chemical Corp. (Sinopec) inked a deal to purchase 100,000 tons of carbon emission quota from China Resources Group, marking the first bulk transaction since the official launch of the country’s national carbon market. The transaction totaled 5.29 million yuan, equivalent to 52.92 yuan per ton of carbon emissions, according to data from the Shanghai Environment and Energy Exchange, which operates the market. Analysts said petrochemical companies like Sinopec are involved with the emissions trading system with their own power generation units, which are under mounting pressure to meet emission goals.

Since its launch on July 16, China’s national carbon market has been operating for a full month, with an average daily trading volume of 319,000 tons. The market’s volume on the day it opened (4.1 million tons, omitted in the chart) accounted for nearly 60% of total trading volume since it got up and running.

The daily transactions consist of listing-agreements and bulk-agreements (for deals of volumes of 100,000 tons or more). Excluding the four bulk transactions on the market in the first month, a significant shrinking trend was observed in listing-agreement volumes. Except for the opening-day spike, daily listing volumes hovered between 20,000 to 160,000 tons and declined on a weekly basis.

For carbon price, the closing price of the carbon allowance listing agreement moderately fluctuated between 51 yuan and 58.7 yuan per ton over the 22 trading days in the first month. A more effective price transmission mechanism has to be formed in the near future.

For now, power generation is the only industry included in the carbon market, with two to three more to come next year, said Lai Xiaoming, the chairman of the Shanghai Environment and Energy Exchange. Lai suggested that during the current five-year plan period, “all eight key industries will be included in the ETS, the paid quota will be gradually increased, the market maker system will be introduced, and institutional investors will be encouraged to enter the market to boost liquidity.”

Caixin Global joins the Yale Center Beijing to bring you SMART Talks on Climate Change, a program to enable emerging leaders in China and elsewhere to combat climate change.

From natural disasters to global pandemic, the effects of climate change continue to be more pressing, extreme, and far-reaching than ever before. We will connect you with thought leaders to gain the knowledge and skills to think, talk and act smart on climate change.

Join us to learn how to “think smart” about climate change from experts in a variety of disciplines all looking to build a more sustainable future, and develop the skills needed to “talk smart” about the future of our planet.

Register now to make the change together:

Caixin Global has launched a regular energy sector brief — Energy Insider. You can check out the content here.